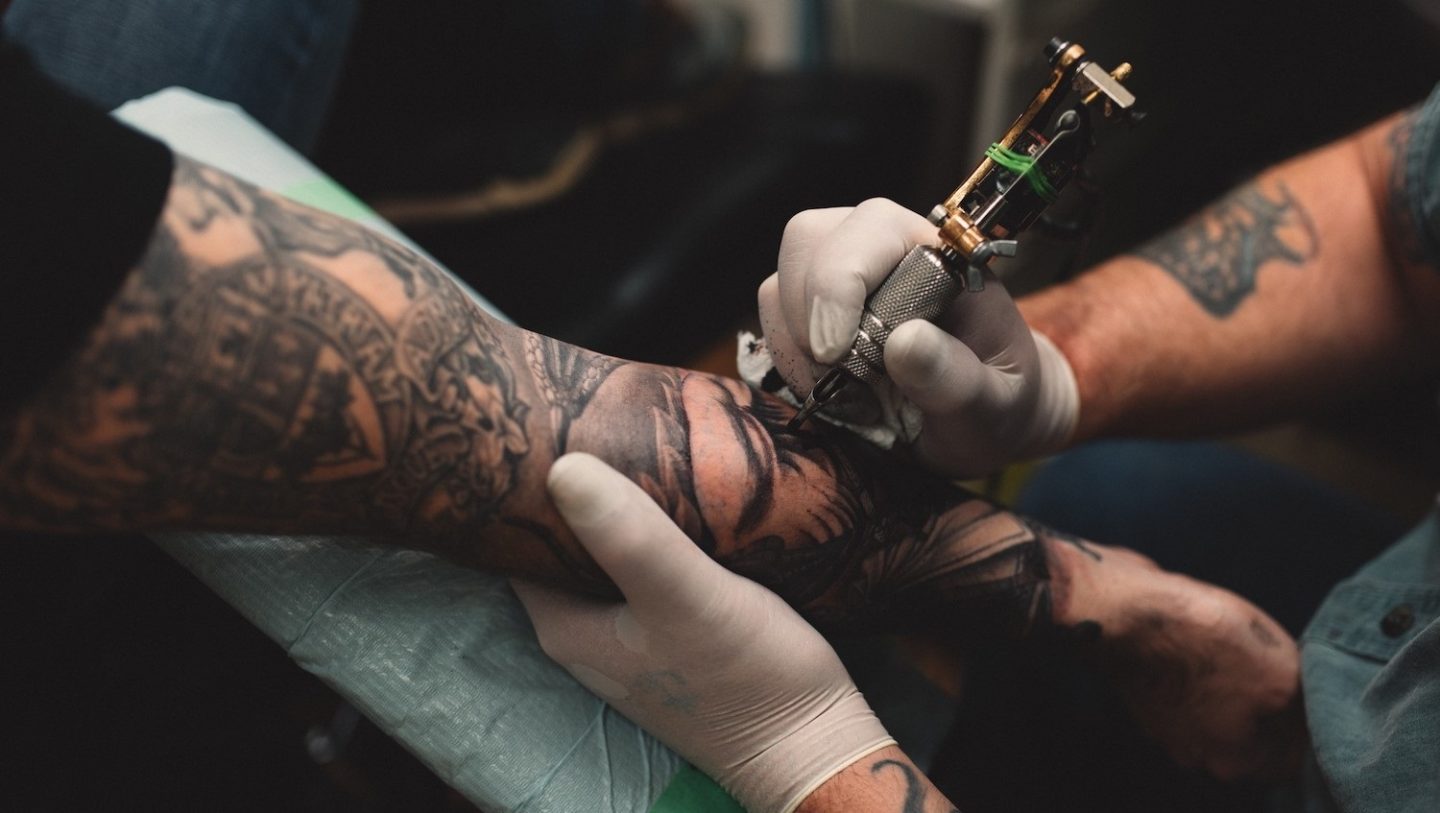 My first tattoo appears the morning after Ian’s funeral. I wake up and press my hands into my eyes to keep out the reality of another day, and immediately, I recognize his work, his clean lines tracing a mountain range in the center of my palm. The skin surrounding the image is raised and red, still stinging with the memory of needles.

My parents and brothers are all still in the house, hovering over me like I might detonate, like they might be able to contain the damage. All day, I close my fist over the image of those mountains, like I’m holding a gem.

Ian always meant to give me a tattoo. At our wedding, my skin was still unmarked, but I knew I wanted one, wanted it to come from Ian’s hand.

Then one day, he came home from the shop stumbling over his words after a customer asked him to ink a date into his back, and Ian hadn’t known what number represented “November” or what order to put the date, month, and year.

After that, time itself felt just as jumbled to me, the week waiting for test results stretching on and on, then the following months crumbling in on themselves, rushing at us like hurricane winds.

The next tattoo is a red zinnia blossoming over my right shoulder. The first flowers we planted in our garden. A long green stem curls down and around my upper arm like a loose thread. The next three mornings, a series of flowers grows on the stem. I wear long sleeves to cover them and every time I’m alone, I peek under the fabric to check that Ian’s work is still there.

At first, I’m convinced I can stay awake and see him. Sleep feels half impossible anyway, and so I sit up in our bed in the dark, downing black coffee until my teeth rattle and my blood feels electric.

That night, he doesn’t come, and by the time the sun is up, I’ve collapsed in exhausted sobs on the bed. When I wake several hours later, a waterfall, one I recognize from a forest where we hiked, is spilling down my left shoulder, its pale blue water like an apology.

It’s not enough. I smash my coffee cup into the wall and watch the dregs run down.

The tattoos keep appearing, after I’ve ushered my family back to their own homes, after I’ve gone back to work, still wearing long sleeves to hide every new image Ian whispers into my skin at night. He’s turned the droplets from the waterfall into stars, constellations we’d picked out on camping trips. Ian colors my arm the deep indigo of night, each brilliant star shining white as diamonds pressed into my skin. The other arm is a full sleeve, our garden stretched from my shoulder to my wrist. Each morning, he’s filled in a new space with a tulip or ivy leaf, deep green and so real I almost try to peel it off and hold it between my fingers.

Everyone asks how I’m doing now. I can’t get used to the switch. For months, they asked how Ian was doing, asked about him every day. Now, it’s like they’ve swallowed his name. No mention at all of Ian, only ‘how are you doing?’

I’m fine, I want to say. Can’t they see that I’m standing, I’m breathing, that nothing is eating into my brain, slowly dissolving every part of me?

Ian is the one who is not breathing. Why have they stopped asking about Ian?

At night while I sleep, with Ian coloring himself onto my body, I’m haunted by all the moments we were alone together, those parts of our lives that now belong only to me.

I dream the first night we spent together. We’d hiked in the foothills of the mountains all afternoon and each time we could have turned back, wandered out of the park and back to our own apartments, we kept walking. After the sun sank behind the tip of the mountain, Ian hiked to the ranger station and rented a tent and a lantern for the night. We zipped ourselves into a triangle of green nylon and lay staring at each other until it was too dark to see.

I traced all the tattoos Ian already had, images of tigers and the footprints of jungle animals running down his arms and across his chest. Arrows gathered in a quiver and an oak tree on his back; a three-mast ship with its sails rippling over the muscles of his stomach and an anchor cradled near the V of his hips.

In the dark, he lay on top of me, his body shaping itself onto mine and touching my skin with his heat in the cold of the mountain air. I wrapped my legs around his hips, around the thick ropes of that inked anchor, pressing it toward me like it too could hold me in place, and as our bodies moved together, pushing against one other as Ian sank deeper into my skin and I felt the hard dirt of the earth against my back, I thought how everything about him felt so very solid.

The last tattoo, the last space left on my wrist is a simple one, a line drawing of two figures standing with a lantern, glowing soft and golden between them. They’re looking up at the stars on my arm, seeking out signs in the night sky.

For now, I keep the tattoos for myself, but someday, I’ll shed the long sleeves and show the world what Ian’s left me. Maybe soon, maybe the next time someone asks me how I’m doing, one of the people who hasn’t mentioned Ian’s name in months.

And I won’t answer. Instead, I’ll roll up my sleeves and hold my arms out to them like an offering. I’ll do it slowly, making sure they take everything in. Then they’ll have to look right at him, how he’s written on my skin. And with all of these colors, these stars and mountains and flowers grown from Ian’s fingertips, we will force them to remember, we will demand that they say his name.

Kara Oakleaf’s work has appeared in Booth, Matchbook, SmokeLong Quarterly, Wigleaf, Pithead Chapel, and elsewhere. Her short stories have been selected for Best Small Fictions and the Wigleaf Top 50, and appear in the Bloomsbury anthology Short-Form Creative Writing. She received her MFA at George Mason University, where she now teaches writing and literature, and directs the Fall for the Book literary festival. Find more of her work at karaoakleaf.com or on Twitter @karaoakleaf.