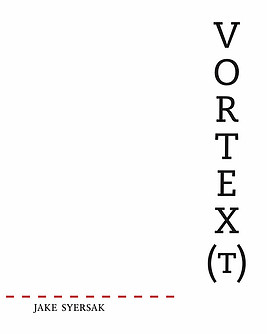 Was William Wordsworth a Terminator sent back to the 18th century by Skynet to induce the self-defeating anthropocentric solipsism? A solipsism inherent in his oft-misquoted statement that good poetry is “a spontaneous overflow of powerful feeling” without the “reflection” and “deep thought” of the equation acknowledged? What does “deep thought” look like in the Anthropocene? And aren’t we all at least a little bit cybernetic now that the internet has reprogrammed our ecological memories?

These are a few of the questions I asked myself upon finishing Jake Syersak’s blistering new chapbook Vortex(t). From the first two poems, Syersak establishes a back-and-forth pattern that is only occasionally deviated from: first, a prose-poem ars-poetica called “Though, Through, Thoroughly,” the title an erasure of a poem found in the Norton Anthology of Romantic Poetry; these poems are then followed by lineated poems called “Verses out of the Vortex(t),” each responding to the title of a news articles about contemporary climate disasters (the California wildfires, the trash heap as big as Texas, the water crisis in Flint Michigan, to name a few). Quotations from poetry of many different schools and time periods are also incorporated in nimble ways throughout.

If thinking the contingent “though” of the Anthropocene through thoroughly is the very problem the speaker is failing to “unseat” in VORTEX(T), it’s the quick movement through image, space, and time that compels the reader into the middle of Syersak’s attempt. Like a vortex-as-clickhole, the everyday detritus, environmental collapse, and  humanitarian atrocities that make up these poems are accessed at a such a feverish pace one can’t deny that “the mouthfeel of a McDonald’s Sausage McMuffin is interstitial” (emphasis mine).

Though what makes this collection feel more catalytic than an affected session of doom scrolling is that it drills and drills deeper into these masses until we aren’t sure which way is up or which problem leads where. Take, for instance, this centipedal sentence from one of the book’s prose poems:

I’ll show you where the needle’s encyclopedic-like end points out an account of anthropocentricism: though somewhat invisible, at times, translucent wings do not make the insect’s body any more interstitial than a drone’s displacement of embodied blame worming its way through a commanding officer’s mouth.

Reading the sentence feels like the poetic equivalent of having a hyperobject dropped on your head (to borrow from Timothy Morton). Or maybe it’s tracing a non-linear food chain: needle → encyclopedia → anthropocentricism → wings → insect → interstitially → drone bomb → blame → commanding officer. I think about the drone bombs for the death of their target, their likelihood to kill civilians, and the half-life of the synthetics they’re made of. Syersak’s stanzas collapse distance, time, and subject just as fast as untethered internet connection brings simultaneity to the experience of disasters.

An elixir for the benefit Skynet may find in the anodyne interpretation of Wordsworth’s preface, VORTEX(T) is a bitter swirling medicine that’ll make you sick. Which is probably how it should be.

Ryan Bollenbach is a writer and musician living in Houston, Texas. He formerly served as Poetry Editor for Black Warrior Review in Tuscaloosa, Alabama. He currently reads for Gulf Coast and Heavy Feather Review. His writing has appeared or is forthcoming in Tarpaulin Sky, Sink Review, Painted Bride Quarterly, Snail Trail Press, and elsewhere. To contact, reach out on Twitter @SilentAsIAm or visit his website his website.