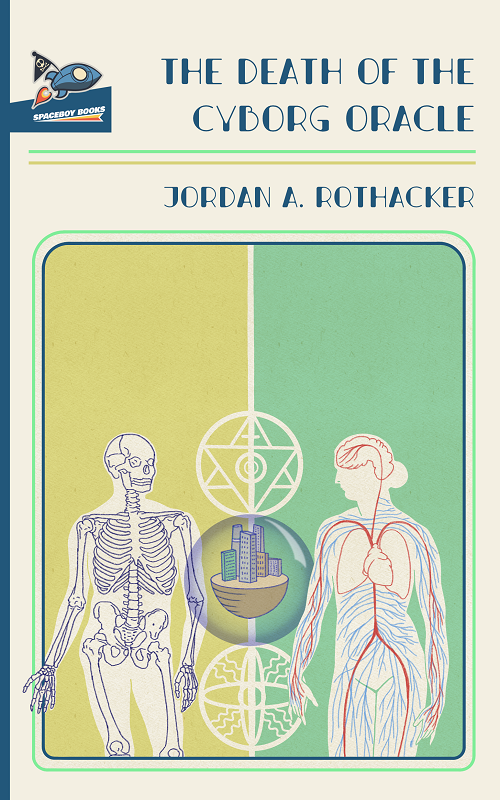 Genre tropes are rarely taken seriously by ivory tower literati, which is to their detriment given the wonderful writing that flows from a variety of pens. Through this work, we come to understand present predicaments and make sense of arbitrary situations, much like myths did for our ancestors. In Jordan A. Rothacker’s latest offering, The Death of the Cyborg Oracle, myth and mystery mingle with philosophy, the future, and much more to create a well-written novel. A domed society two hundred years from our present time is vividly brought to life. Capitalism is dead but at a psychic cost to its survivors. Also discontinued is monotheism. Without capitalism, people needed devotional abstraction so a newfound religious zeal became henotheism, where all gods, goddesses and whatever lies in between coexist. Atlanta remains relatively unchanged, minus the dome protecting the city from the uninhabitable wasteland just beyond its confines.

The city is RESURGA, as is their motto: “Our Domed world, built on and in protection against the hot ash and air of Kapital’s implosion, houses every possible expression of hope; and hope is expressed through belief. Our last single, monolithic, communal, state-endorsed belief almost killed us all. We need to believe. The great god Kapital is dead. No more imperial monotheism. We are all henotheists now. Our minds are as open as our society.” An innate trauma affects the citizens of this future Atlanta where capitalism (Kapital) is dead and gone, secrecy and privacy have been replaced with a more open society bearing a sobering hope. As the story unfolds, more of this not-so-distant future is brought to life with nimble, quick-paced prose that never misses the opportunity to both provoke and amaze. Though much has changed in this world, some remnants of the old system remain. Imagine an elected government where the officials do the required job delegated by their electors! City safety is still a necessity but is divided into two thematic jurisdictions: Profane and Sacred, the latter covering metaphysically suspicious deaths, which is where the two main characters are employed.

This futuristic Atlanta is the setting in which the narrator, Assistant Sacred Detective Edwina Casaubon, is a recent transfer from the Profane Department. Her new partner is Sacred Detective Rabbi Jakob Rabbinowitz, or “Thinkowitz” to those who have earned the privilege. Their first case together is major: someone has murdered Tiresias Pythia. Given that the victim is none other than the famed and respected Oracle of Delphi, the crime falls under the Sacred jurisdiction, despite it being a most profane act. Interviewing suspects, friends, coworkers, even rival prophets, leads the pair through the site-specific city as they gather the information needed to solve the crime. This is where the plot discussion ends … it is a mystery after all.

The breadth of a work or its genre should have no bearing on quality or merit. When a new world is created and done well organically as the story unfolds, it’s impressive. When executed economically, it makes for a better reading experience. In these imagined but acceptable settings, anything is possible, even after the initial story is over. Margaret Atwood’s Gilead or the alternative futures of Philip K. Dick come to mind. There could be more crimes for Detectives Casaubon and Rabbinowitz, (I haven’t earned the honor of familiarity just yet). But to quote Detective Rabbinowitz, “What we do bridges Sacred and Profane. You can’t have one without the other … and there is a necessary distinction in our work between these two types of crimes … we engage mystery … but we never actually solve a mystery. We solve crimes, something inherently more profane.”

The author’s handling of mythologies and philosophy is staggering, and his care with gender, sexuality and identity is equally commendable. There is a knowledge of all the devices in use which makes it easier for them to be subverted. The usual gloom that still skulks about in the dark city alleys at the end of most noir stories is dashed by a seemingly universal desire for a better future, despite the occasional brutal murder. Even the world two hundred years from now is better than most could imagine, or even think could be created with any amount of success.

Central to the accomplishment of this page-turner is the weaving of disparate but connected mythologies seamlessly into the essence of the story. Once dead but rejuvenated cults from ancient Rome and Greece are supported by excessive but equally favored and blessed legends from the world over. Even our nineteenth through twenty-first century prophets like Whitman, Marx, William T. Vollman and very importantly David Bowie, are elevated to their rightful glory among the pantheons. The explosive reveal towards the end of the book even delves into an analytical morass worthy of its own epic. What are fiction writers but present day mythmakers, besides?

And like so much mythology, an anticipated effect is to inspire hope when its needed most, or to give a glimpse of possible, better realities. This desire and achievement is shared with worthy literature. Today’s climate makes this more important than ever. Ideas, leaders and even gods all come and go. An effective book however, while delivering a fantastic yet probable story, can also serve as an example of what is possible with well-written, rousing prose. The novel is often a mirror held up to a society in need of retribution and can offer plausible solutions. Rothacker’s work offers insight to a future most people would find ideal. This book also gives a key insight into how it all might be possible. The generally peaceful coexistence in this futuristic, domed Atlanta between various creeds, genders, races and deities is encouraging and key variables in any equation for a better community, then to a better country until the world is affected and inspired. The seeds have already been planted millennia ago; thankfully work like Rothacker’s further nurtures these noble ideals with a well-crafted book rife with references to old lessons humanity has yet to master. What better vehicle to disseminate these optimistic possibilities than an unassuming science fiction novel?

Jarrod Campbell lives with his boyfriend in the Virginia suburbs of Washington DC. His writing often addresses heteronormativity and the futility of modern life. He is currently working on his second novel.