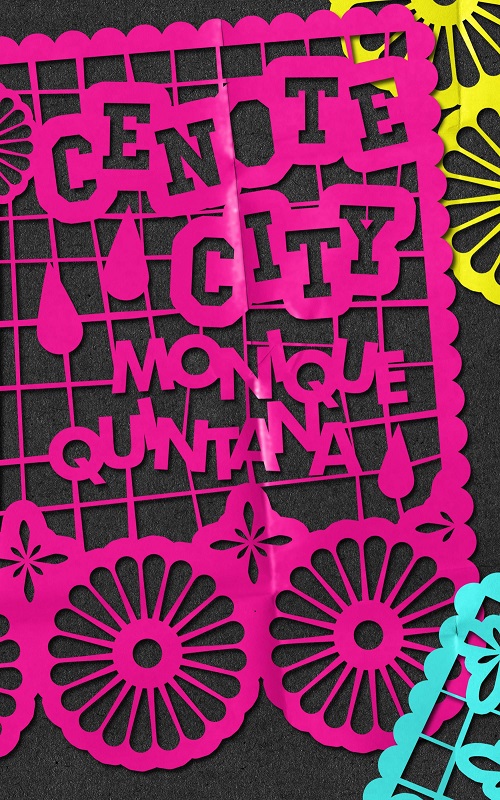 Monique Quintana’s debut novel Cenote City drowns us in a surreal world of magic, folklore, and modern-day characters with their own tales to tell. The men and women in this collection all have their own battles to fight, and Quintana’s craft of spinning ancient ritual mixed with the present-day creates a vulnerable, fantastic tragedy that far surpasses any fairy tale any of us will ever encounter.

Lune Lopez is hired to run Storylandia, a place within the town’s local park where parents take their children to learn about fantastical things (before they stop believing). Lune’s mother, Marcrina, delivers dead babies at the local hospital, and at the pregnant women’s homes, performs rituals for the dead. Marcrina lives in the cenote, a natural pit or sinkhole, because of the tears she can’t stop crying. Although this story has many central characters, all connected within the town, the root of this book revolves around Marcrina and her daughter Lune. This book speaks of a generation of women and their sorrows, handed down from mother to daughter within a sinking house that Lune is desperate to rescue her mother from:

All the families came to the cenote until one day they begun to lose their faith in old ways and then the cenote was just a waterhole with no purpose. The trees began to sway as my father told me these stories, and I reached up and grabbed a branch and pulled it to the earth like it was a quill pen and gently wrote my name in the dirt.

Along the way, Lune must be wary of “The Generales” (the people that oppress her people) and the havoc they cause on the town and its inhabitants. Underlying the cenote and the Generales, Lune must go about her daily life and interactions with various relatable and odd friends, including The Clown of Everything, who makes children disappear as a party trick, sometimes with terrifying results. Lune is surrounded by a town, neighbors, friends, and family—including an absent father—while protecting her young son and trying to save her mother. The weight of her world is always threatening to suffocate, yet she is fiercely strong despite the underlying threat of evil and oppression. The modern aspect of this novel never overrides the vein of ancient traditions and rituals that pump into the heart of these stories or its characters:

My father kissed my mother’s lips and tasted the animal’s blood and it tasted like one thousand little starts in his mouth. He didn’t like the taste of it because it reminded him that she would never be his.

Each character has their own chapter to speak of their own tale, yet all these people are connected either by the town or family or friendship. As much as this collection is heavy with folklore, the characters still maintain the present day with relatable issues, such as love, death, fashion, and even a nerve-wracking sex scene in a dressing room. Quintana delivers it all, but never in a manner where we are left questioning her direction. The familiar feeling of friendship, sorrow, death, and magic all seem comfortable in its dark roots, enough for any of us, from any background, to have a sense of connection with its characters and their tragedies:

The spring after Lune’s father left them, she found her mother in the backyard of their house, floating in a plastic baby pool, her dress blooming around her body like a daffodil. Lune had been to a birthday party in Storylandia. She began to scream and tried to pull her mother out of the water. The warmth of the water was a shock to her hands and it soaked her party dress, making the skin on her legs burn and itch. She clawed at her own skin with her nails, painted pink by her mother with care. If the clouds could bear witness to that afternoon, they would say that Lune was a swirl of ribbons and brown skin, her kneecaps scraped by the sea of grass, bluish green and bleating, not willing to give up their secrets.

We who love imagery and language so beautiful it hurts to read will love this collection. The layering of folktales woven with modern characters and cultures, magic and rituals, will have us lost in a world full of the impossible, yet, still relatable and with a strong sense of connection to loss and heartbreak, it sometimes catches you off guard. Quintana is a voice to be both reckoned with as well as absorbed. Both the beauty and trauma of her writing come from experience driven by an instinct for language and images that will leave us breathless, feeling like they are drowning in the power of Cenote City and all its terrible wonder.

Hillary Leftwich earned her MFA in fiction and poetry from the Mile High MFA at Regis University in Denver. She is co-host for At the Inkwell Denver, a monthly reading series. Her first book, Ghosts Are Just Strangers Who Know How to Knock, was published by Civil Coping Mechanisms in October 2019. Find her online at hillaryleftwich.com.