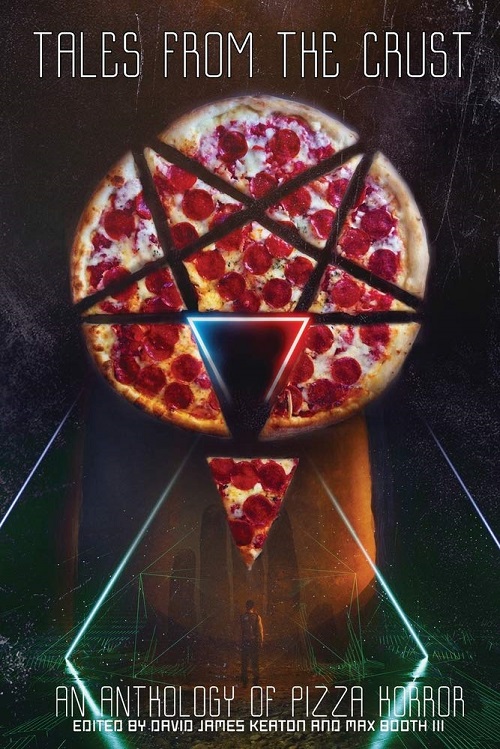 I love pizza. I could eat it at least every day, perhaps even every meal. So when I had the opportunity to review Tales from the Curst: An Anthology of Pizza Horror, edited by David James Keaton and Max Booth III, I was stoked! But also, admittedly, a little concerned—what if these stories turned me off to the best food ever?

Like any good horror heroine, I ran straight into the kitchen, instead of out the front door. There, I found that the twenty-eight slices of this pizza have toppings for everyone, whether your tastes run to classic horror, sci-fi, or speculative fiction.

The collection starts off with fairly expected flavors. The titular pie of Cody Goodfellow’s “The Vegan Wendigo” has toppings too good to be vegan. As our narrator happily limps down a soylent green-tinted rabbit hole, we are off to fraternal college hijinks in “When the Moon Hits Your Eye” by novelist and playwright Jessica McHugh. In this story, things really start to get weird—much like the girls the hapless pledge-slash-pizza delivery boy attempts to seduce.

“Rosemary and Time” by Craig Wallwork, the third piece, really whetted my appetite. I particularly appreciated how it begins with a gruesome description of a burn—and how it’s so bad “all you can do is think of something else. Distraction. Memories.”—and then it jumps to something that may or may not be a memory. Who is telling this story? Does the story’s power lie in the hitman, in his mysterious client, or in the time-space continuum? Despite the incongruity of an American phone number while the story takes place in England, I was intrigued. There were more questions than answers, and I wanted to keep eating.

One of my favorites selections was Rob Hart’s “Last Request,” where a prison secretary’s involvement with a death-row inmate helps her learn who the real monsters are. And what a really great pizza tastes like. Hart has also authored a food-noir collection called Take-Out, and this deliciousness of this story made me go on the hunt to order it in.

“Upper Crust,” by Michael Paul Gonzalez, probably gave me the most indigestion of the entire collection. Where “The Vegan Wendigo” showed us how the sausage got made literally, here we see it figuratively—as we learn just how low some men will go in order to rise in society. Gonzalez’s narrator, Tanner Steed, oozes pretension like pepperoni grease, interrupting himself with braggadocian asides and pearls of wisdom like “here’s a little secret. If everyone’s sitting, you stand. If everyone’s standing, you sit.”

“Elude the Snood” by Tony McMillen, introduces us to a gentleman who feels his life was ruined by a pizza chain’s marketing technique—but when he confronts them, he learns more than he bargained for… or does he? The book’s afterword by Nathan Rabin also harkens back to Domino’s classic “avoid the Noid” commercials—only with more sex, drugs, and vigilante justice.

Smack in the middle of the collection is “Cenobio Pizzeria” by Joshua Chaplinsky, which is not a narrative story, but a menu—the menu for a pizza parlor with no address or phone number and offering “catering to boundary pushing appetites since 2002.” Cenobio’s offerings include The Lecter (covered in fava beans and pan-fried liver), The Day of the Locust (crunchy locusts baptized in wild honey; a favorite of itinerant preachers), force feeding, and home invasions.

Another non-traditional story is found in “Introduction to ‘Let’s Kill the Pizza Guy’: The Love Poems of Yael Friedman concerning Hadassa Herz.” Here, in the style of an academic foreword, Tim Lieder creates the deep-dish history of a poet whose former lover, well, killed pizza guys. I found myself very sad that this book of poetry does not actually exist.

In yet another format, the tale in Pearse Anderson’s “Crucifixions in the Garden of Garlic Bread” is taken from “a partially burned hard drive” that previously belonged to a journalist who found a much deeper mystery when he began looking into pizza parlors that survived being fronts for the Mafia. The parlors survived. The victims, however, want their stories told.

As much as I enjoyed the non-traditional stories included in this anthology, I would be remiss to not mention some of the others that were particularly tasty. Though to call anecdotes about life after a supposed nuclear blast (“Mickey and the Pizza Girls”), aliens using subliminal advertising to take over the earth (“The Black Cheese”), and two zombie outbreaks—one involving priests as the front line of defense (“Body of Crust”)—“traditional” feels a bit misleading.

From the introduction—where we learn just now this anthology was baked… and how much one of the editors hates it—Tales from the Crust delivers a delicious collection of all the pizza horror you never knew you needed, cheesy and greasy in all the right ways. After devouring all the stories, I have a whole batch of new-to-me authors to enjoy and am still in love with the perfect NY-style slice.

Ann Davis-Rowe loves stories and organization. Both of these are most evident in the fact that she holds a master’s degree in Library Science, but she’s better known as a frequent performer, sometimes writer, and darn good secretary. When not at a theatre, she can usually be found trying to find the perfect hair color, pretending to exercise, and avoiding cilantro. The rest of the time she’s watching TV and/or eating, cooking, or researching (cilantro-free) recipes with her husband, Hampton, and their helpful four-legged tastetesters, George and Val.