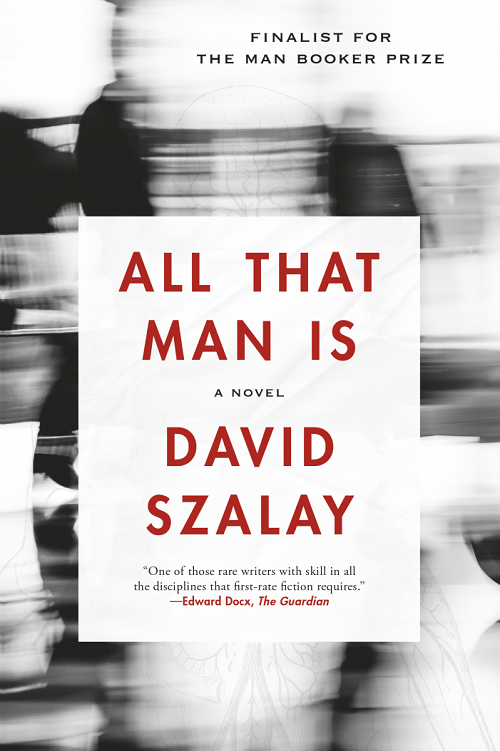 British author David Szalay’s latest novel—a term which doesn’t capture Szalay’s unique approach to the genre—is a restless, schizophrenic thing. Divided into nine sections featuring nine different men of at least six nationalities, set in approximately thirteen countries, the canvas Szalay covers is impressively wide. The men range in age from seven to seventy-three, and in an odd chronology, each central male figure is older than the one in the section that precedes it. Szalay efficiently dips into and out of each episodic section with ease and grace. Due to its impressive scope, what should seem too ambitious, its narrative fragmented and scattered, is so thoughtfully arranged one is compelled to focus on its construction alone.

Because these stories are compressed, it allows the author to explore and meditate on lofty and profound ideas throughout: familiar tropes like the meaning of life, the value of relationships, the complexities of love, the ineffable passage of time, and time lost.

But the insights gained are never hackneyed or unearned. Szalay’s writing style—precise and efficient, with an understated, intimate tone—conveys these meditations authentically.

The popular Ecclesiastes quote (you know the one: To everything there is a season …) establishes one of the main themes: the subtle passage of time. But let’s be clear: Szalay is issuing a serious warning also—modern man is in a state of crisis. Loneliness, sadness, depression, and physical and emotional isolation litter the lives of each of these guys, regardless of age, nationality, or status.

Take the first story, where Simon and Ferdinand, two English teenagers with plenty of  time to burn, are on a European jaunt, traveling in Berlin. Simon privately longs for a female acquaintance at school who is unaware of his feelings. He suffers waning enthusiasm for their European adventures, leading to unexpected exhaustion: “It is the tiredness, maybe, that makes him feel like crying. What am I doing here?” And later, the sadness pervades his physical environment: “The hum of the extractor fan sounds more and more like sobbing.”

They stay in the home of a man and his lonely Serbian wife, whose sustained advances towards Simon leave him even more depressed: “‘Stay with me,’ she says quietly, her face serious now, her hand moving round to the front of his thigh. ‘Please,’ he says, seeming nearly tearful. ‘I’m tired.’”

The episode ends with Ferdinand consummating the relationship Simon could not, or did not want. Both this relationship and the imagined one with the girl back home remain frustratingly unrealized for him.

Another theme is stated explicitly with Simon reading Henry James’s 1903 novel The Ambassadors, a carpe diem-ish exclamation, a passage which Szalay quotes from intentionally:

Live all you can; it’s a mistake not to. It doesn’t matter what you do in particular so long as you have your life. If you haven’t had that what have you had? I’m too old—too old at any rate for what I see. What one loses one loses; make no mistake about that. Still, we have the illusion of freedom; therefore don’t, like me today, be without the memory of that illusion. I was either, at the right time, too stupid or too intelligent to have it, and now I’m a case of reaction against the mistake. Do what you like so long as you don’t make it. For it was a mistake. Live, live!

In the second story, the notion of living life to its fullest is distorted to a comic-tragic degree, as Bernard, a Frenchman in his twenties, is left to take a solo trip to Cyprus after his friend backs out at the last minute. Bernard quickly befriends an obese mother, Sandra, and  her exceptionally plain, and grotesquely overweight daughter Charmian. Both are tourists as well, staying in the same semi-squalid hotel as him. Through their mutual if unexpressed loneliness, they quickly become physically  intimate. Upon first seeing Charmian unclothed:

For a moment she stands there, in the veiled light, naked, looking like a huge melted candle, all drips and slumps of round-shaped waxy flesh. Pendulous surrenders. Those pale pink nipples the size of his face. There is just so much of her …

His need for her is so strong, “… it seems that there is nothing else to him, that that is all he is.” His identity is subsumed and consumed all at once.

The idea of freedom is explored throughout: the joy, the independence, the “inviolable solitude” the main character in section four doesn’t distinguish from freedom, and the consequences—for better or worse—of decisions made that freedom allows.

A man in his thirties is departing London, in “… silence. Not quite silence, of course. Never true silence here. The sublimated rumble of a plane. The burble of pigeons courting on a cornice.” Szalay’s eye for detail and ear for the poetic sound merging as one. The character previews his past as he drives to Brussels, followed by a review of his more recent romantic endeavors, and then one in particular as he arrives at an airport in Frankfurt, where the subject of abortion for an unwanted pregnancy is considered, discussed, and avoided by the couple. The decision to proceed with the procedure is reached mutually, however, bringing him relief:

“Okay,” he says, now taking her hand. “Okay.” It would not do to seem too happy. And in fact, to his surprise, there is a trace of sadness now, somewhere inside him—a sort of vapour trail of sadness on the otherwise blue sky of his mind,” his internalized pain expressed uniquely in the abstract.

An easy analogy to the stylistic narrative Szalay employs is to a TV viewer with a remote control flipping through a series of dramas on a fictitious Emotionally Damaged Men’s Network (or daisy chain of YouTube clips), dropping into a story mid-stream. The viewer follows the plot until they’ve reached a satisfactory exiting point, to flip to the next channel and do the same. Maybe Szalay is commenting on an assumed lack of focus and attention in today’s readers here—as if they are navigating a literary version of a Netflix series, stories  streamed and ingested in a binge of seamless episodes, with no real beginning or end?

Or maybe not. In a recent interview Szalay said he was bored with the conventions of the traditional novel with a single narrative, and sought a different approach. (With three previously published novels, and All That Man Is a finalist for the Man Booker Prize, perhaps that’s where a writer finds oneself.) If this novel approach kept the idea of the “novel” fresh for Szalay, that curiosity successfully transfers to the reader as each excerpted story unfolds—the rewards are singular to each section, but become cumulative as one moves further  through the book.

The twin notions of time passing, and a gradual awareness of mortality, is even more pronounced in section six. The setting is Geneva. James is on a business trip to meet Paulette. His feelings appear without much notice as a simple afterthought: “He feels sad.” Later, as he is reviewing properties for potential development, thoughts enter his consciousness as if by accident: “He felt mortal, this morning … Time is slipping away. He is not young now. I am not young, he had thought. When did that happen?”

And those observations persist without much effort: “He has started lately, to have the depressing feeling that he is able to see all the way to the end of his life—that he already knows everything that is going to happen, that it is all now entirely predictable.” And at the end of the section, when considering leaving his wife and a son he has neglected, a sobering observation occurs: “The day is windless. It’s not a joke. Life is not a joke.”

The final section of the book ends in an elegiac tone, as Tony, age seventy-three, living in Argenta, Italy, becomes acutely aware of his mortality: “He thinks about death quite a lot now. It is hard not to think about it,” and “It still seems incredible to him that he is actually going to die. That this is just going to stop. This. Him.” The ruminations continue; some are conveyed as Tony’s private thoughts as if an interior monologue: “All these people you know in a lifetime. What happens to them all?” and another observation followed by a question: “He was fading away. Fading away. Do we all end up just fading away?” While the story is mostly without incident, it is filled with aphoristic asides Tony lights upon as his thoughts turn over, seemingly on their own. One chapter states clearly on a single page, “Let us love what is eternal and not what is transient.” Another chapter ends with a mirrored response to that, as if in a dialogue with itself:

So what is eternal?

Nothing, that’s the problem. Nothing on earth. Not the earth itself. Not the sun. Not the stars in the night sky.

Everything has an end.

We know that now.

And this private insight then, maybe, is a sufficient stay against death’s inevitable arrival.

Ray Barker is an Archivist in the Special Collections department at the Martin Luther King Jr. Memorial Library, in Washington, D.C. His work has appeared or is forthcoming in Music & Literature, The Collagist, Vol. 1 Brooklyn, Gulf Coast, Full-Stop, Rain Taxi, Cider Press Review, The Southeast Review, The DC Line, and elsewhere. He is a regular contributor to the Library’s podcast, DCPL Radio, and is currently working on a book on Washington, D.C. defunct art and music venues. He lives with his wife and daughter in Washington, D.C.