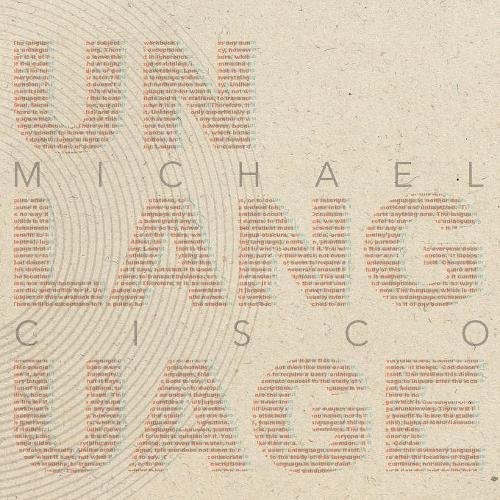 I am not going to assume you’re here because you received the workbook in some innocuous way that in retrospect seems increasingly mysterious—say, a stranger handed it to you on a busy train platform or an unknown colleague stuffed it into your department mailbox. I acknowledge plenty of such stories are circulating on social media platforms for which I do not have an account, but I actually paid for mine—at an estate sale in Wichita.

The workbook presents itself as Michael Cisco’s new novel Unlanguage published in April by Eraserhead Press, and I guess it really is both, its lessons on the parts and syntax of a language called unlanguage supported by readings that tell a story. That narrative contains an accessible plot despite its entanglement with the ineffable strangeness of the “undead language”—still evolving but never spoken—which it describes. In fact, the publishers were able to stamp a fairly accurate slugline on the back: “a suicide survivor trying in vain to write himself back into existence.”

He, speaking in various persons and appearing in various personas, does, indeed, emerge from a cult’s ghastly mass suicide, but that’s only the beginning. He meets a shadowy informant in dive bar, travels through a portal in a brownstone manifested from an old man’s memory, and serves as a librarian in an abandoned city, among other scenes, some of which feature encounters with a shapeshifting woman named Mycelia, all of which, it turns out, involve a foreboding figure known as The Magus. The episodic structure of the readings resembles the various excerpts in Italo Calvino’s If on a Winter’s Night a Traveler if Calvino had been on acid.

What may make or break the success of both the workbook and the novel is the extent to which the two comment on one another. Presumably, the spectacular goings-on of the readings evince unlanguage’s lexical structures, such as void nouns, antitense, and negative voice. The reading for Unit Twenty-Five, for instance, dramatizes the protagonist’s not-so-chance meeting with a Frenchman on a train and subsequent intrigue concerning an attempted assassination at a remote estate. This unit’s grammar lesson covers unlanguage’s mundial system in passages such as the following:

The digressive is among the most important mundials; this is an inflective category that affects all tenses, as it shows whether or not the event in question takes place during regimented mortal time or unregimented demonic, digressive, time. Where the digressive achieves its superlative state it leaves and never returns, this is known as the embarkative or disapparition.

I am left pondering how mundials apply to strangers on the train even as I get it that the disappearance of the Frenchman into a painting at the end of the passage serves as an example of disapparition, and overall, the linguistics and the narratives are both informed on every page by death.

More specifically, the unifying concept might be termed the composition of decomposition, of organic matter in general but specifically of the corpse. In Unlanguage, the dead don’t just walk, they fall apart all over the place, and their doing so is at the same time repugnant and resplendent. There is a classroom scene early in the novel in which a female student, maybe Mycelia, exits the room, returns sans her clothes, then dies in her chair. A half dozen paragraphs ensue depicting her body’s transformation, involving “filaments of black,” “inky fluids,” “black stalks,” and from her pelvis “coral-like growths with cavities that produce long thick tufts of black fibers” until by nightfall “[t]he jungle of her rotting fills the room.”

In The Powers of Horror, Julia Kristeva identifies “[t]he corpse, seen without God and outside of science” as “the utmost of abjection.” In that sense, Unlanguage is the dead body of a novel revealing the limitations of literary devices like plot by displaying possibilities made evident amidst the ooze of their decay. The workbook, however, is harder to define. Now that I have learned unlanguage at least as well as I did French in college, with whom may I now communicate anew? My guess is you, as much as I am assuming you got the workbook too.

Paul Dee Fecteau holds an MFA in Fiction from Wichita State and serves as the sole proprietor of Hieroglyphica Research Consultants, which offers tarot-based oppo research and background checks via gematria.