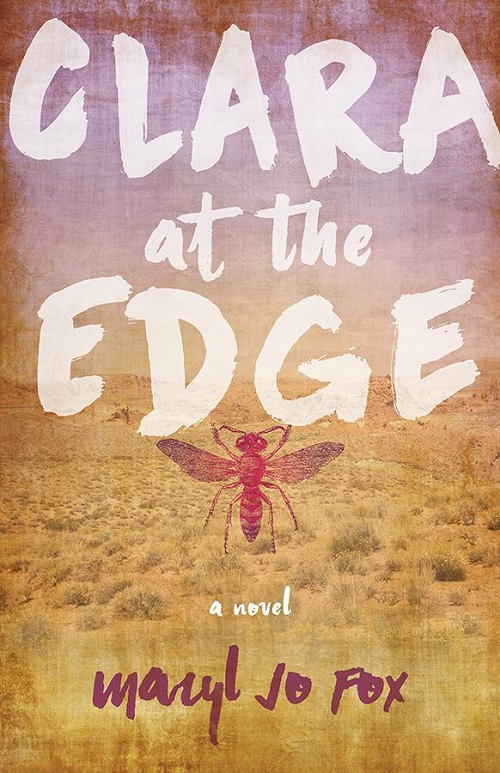 The story of Clara Breckenridge is the story of a woman who uproots her whole life, moving her house to Jackpot, Nevada, in an effort to reunite with an emotionally distant son, Frank, and to come to terms with the loss of her husband and daughter, after years of cordoning it off in her brain. This is not a story for those who don’t care to feel. Clara, seventy-three and struggling with deep losses, has just uprooted her house to save it from a demolition crew, and enlisted the help of her estranged son Frank to drive the house to Jackpot, and settle down. She makes this journey with her spirit guide, a lavender-colored wasp, and two jerky jars filled with the rest of her wasps, which push her to new emotional revelations, struggles, and adventures.

With a roving point of view, Fox gives us insight into all the characters’ lives, showing us truly how each decision, caused by the characters’ own thoughts and fears, can lead to unimaginable consequences. Clara, the woman with “the floating house that came down from the sky,” touches the lives of strangers along the way, making emotional connections that alter the course of one another’s lives. Each thought, word, action, and difficulty holds emotional weight. In one scene, Frank, Clara’s estranged son, works on carving a burl into something beautiful, and even this handiwork holds strong emotional real estate on the page: “He’s never worked on a burl before. Curdled deformed wood. Finally a rough form emerges—a gnarled pair of eyes, branching heavy eyebrows—something like the top half of a bulging skull.” This action transforms the world of Clara at the Edge, so that every moment, every thought holds untold treasures to discover. It is difficult to identify simply one strong point of the writing style, but this careful plotting of each moment is certainly one of the most exciting, as every moment of the narrative feels intentional.

The writing is just like Clara. Unpredictable and powerful. Reading this novel is like walking through Clara’s house, new discoveries in the motifs peppered about the chapters, as she reveals more about her history in bursts. The story unfurls in small acts, as the rooms Clara has built in her mind to separate her past terrors and sorrow swing open with the help of her purple wasps, and she is forced to meet the emotional territory she had sectioned off all her life:

Each thing Clara experiences builds its own little room in her brain and wires itself into memory, the central screening room. Some rooms are more walled off than others. A few are fortresses. The day of Samantha’s death, for instance, is so upsetting that she can’t fully revisits it. It’s locked up tight, and that’s her problem. It’s getting moldy and infected.

This direct, honest style can lead to some overstatements, or repetition that may have intended to drive the point home, but just becomes exacting on the reader. The character’s struggles are, in essence, the same struggle. While this gives a unifying theme to the narrative, it runs the risk of giving the reader too many similar revelations. When everyone’s problems can be reduced to simply not getting enough love when they were younger, it’s as if we have watched the same episode resolve itself three or four times. The direct language is one of the many strong suits of the novel, yet it runs the danger of unravelling the characters.

Overstated characters are not necessarily all bad, as when we look at the sheer amount of characters, it is impossible to give the page space to each character that their personal trauma deserves. The story is not necessarily only about personal issues, but also about the way the characters collide, often in more and more catastrophic ways. However, it is impossible to speak for any length on this book and not mention the care, and detail, Fox takes with the elements of surreal. The wasps are characters in themselves, often the most interesting thing in the familiar landscape. From the first moment the wasps are mentioned, it’s impossible to resist their fascinating influence. They come in to save Clara “when she’s old enough to know her father can do something far worse than just beat on her,” and they stay with her for her life, the purple wasp working against its lifespan to try and bring Clara an emotional resolution with her struggles.

This novel is a beautiful story of how someone can still find emotional freedom after years of repressing everything in their head, how grief doesn’t have a timeline, and how each person finds their way through life down different paths. We aren’t all that different in the end, and this novel is an exploration of how the smallest actions by one person can affect many lives.

Buy directly from She Writes Press

Laura-Gray Lovelace is a junior English major at Winthrop University. Her most recent piece, “Me Too,” was featured in Winthrop’s Anthology Literary Magazine.