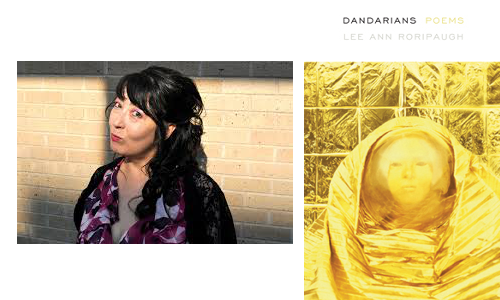 When you come across a poetry collection with a word you’re not familiar with as the title, and a picture of some sort of cocooned humanoid on the sun-yellow cover, you’re bound to be intrigued. Buy that book. That book is Lee Ann Roripaugh’s fourth collection, Dandarians (Milkweed Editions, 2014), and is as mysterious and intriguing as the cover image (“The Astronaut Bride.” Self-portrait, 2002. By Kimiko Yoshida).

Roripaugh utilizes fresh imagery and masterful musicality to invite the reader to experience a personal metamorphosis from child to adult. The book’s title is a reference to the speaker’s mother in the collection’s first poem, “The Planet of Dandar.” Because the woman’s first language is Japanese, she often mispronounces English words, in this case, “dandelion.” This is a theme Roripaugh returns to throughout the collection, and it only serves to invite the reader in more. One becomes the child struggling to fit into American society—and it’s a cruel one when you’re a conflicted child—while trying not to be embarrassed by the person who gave her life.

There is discomfort in Dandarians, a sense that everything is temporary because we are constantly evolving. You cannot help love the transformations. The way Roripaugh bends language to her whim is nothing short of spectacular. Utilizing a prose form, she manages to create a dreamlike flow from one point to another that a poet can’t always achieve with more formal structures.

Luckily, Lee Ann Roripaugh was kind enough to engage in an interview about Dandarians so I could ask her about her choice of form and her insane talent for simile and metaphor. There are so many subtle techniques at work in her poems that I just had to ask about their usage. A reader must pay attention when reading Dandarians in order to enjoy it fully. I’ll admit, there times I had to read poems more than once to make sure I got it all. In crafting these interview questions, I wanted to be sure to ask about those small moments, those motifs I picked up so carefully.

There is a theme of metamorphosis—butterflies, moths, flowers. Was this a conscious choice to reflect the metamorphosis of language that comes up so often in these poems? (Specifically: “Dandarians,” “Dee Aster,” “Femanint.”) How does this change in word pronunciation affect your writing as a whole?

I’m attracted to the possibilities of metamorphosis and transformation, and so this is a theme that recurs in a number of my books in various incarnations, but here, too, it’s definitely a backdrop to the idea of linguistic metamorphosis or linguistic transformation as an expression of the fluidity or even the arbitrariness of language, of hybrid/mixed-race identities as expressed through hybrid/mixed-race language, or the pressures of obligatory immigrant assimilation as exerted through linguistic control.

I love, love, love color and I’m very easily visually stimulated, so visual impressions are perhaps the first (although not the only) sensory input that I take in. Colors seem to stimulate my brain in a way that makes my neurons very happy, and I suppose I like to try and use language to make these same neurons light up in my readers’ brains as well.

Morning’s rupture of snow. Everything disintegrates, flakes away like dried
flecks of sour milk.

Your similes and metaphors are so new, yet, as a reader, I think to myself, “Of course, that’s the way to describe that thing. It’s always been that way.” When using metaphor, how much of the process is emotional versus analytical?

Metaphor, for me, creates this interesting conundrum of yoking together two incongruous elements associationally in a way that first completely defamiliarizes then ultimately refamiliarizes—creating an association that’s completely unlikely and unexpected, yet whose components, when struck together, function like two chips of flint creating a spark of surprising recognition. At the same time, yes, I want the metaphor to remain true, tonally, to the emotional and psychological landscape of the poem. For me, this process seems to start with an image that I find compelling—either something that I notice and want to burnish with the veneer of my attention, and by extension the attention of my reader, or something that impresses itself upon me in a way that calls my notice/attention. The way my brain works, I naturally seem to process this isolation of image, this calling of attention to image, through defamiliarizing/refamiliarizing it with metaphor, and the metaphor is also the process by which I understand the emotional or psychological function of the image—either within the context of the lived/observed moment, or within the context of the poem toward which the image is magnetically drawn.

We must discuss sound. There is heavy use of consonance and assonance, especially in “Griots’ Signposts,” that gives so many of these poems a musicality. Most poets I’ve read rely on meter, repetition, or even the shape of the poem to define the parameters and location of musical moments. The poems in Dandarians use a freeform/prose structure. Does this form make it easier for you to have these musical moments, or do you find it to be more of a struggle, an organic development versus a conscious decision.

Well, that’s definitely one of the intriguing formal challenges of the prose poem, right? How to take advantage of the extra breathing room afforded by the space of wraparound lines, but without letting the lines flatten/smooth out completely into a standard prose line. I feel like, yes, line breaks create a sense of pacing, phrasing, and measure in a lineated poem which define a poem’s musicality in crucial and exciting ways, but they can also contain a poem’s musicality as well. And so, for me, there’s a certain liberation (as well as a formal challenge) in attempting to create musicality/musical effects within a poem without the measurement of lineation. I wouldn’t say that one form is musically easier than another, just that they foreground different possibilities or priorities of music-making.

Flecked, freckled, riddled, marred, bruised: there is a sense of being marked in many of these poems. If the speaker in the poem is marked/scarred, is the poem a reflection of that marking or a casting off of the scar, a healing?

That’s a great question! Both things, actually. In certain respects, this is a book about vulnerability: vulnerability of children, vulnerability of the female-gendered body, vulnerability of abuse and sexual trauma, and vulnerability of disclosing or speaking out about abuse and sexual trauma. Additionally, this is a book, too, about the healing aspects of vulnerability: the power of making oneself vulnerable and the casting off of shame through emotional risk-taking and speaking out, the rejection of silence or silencing and recuperation of a traumatic narrative through revealing what is bruised, or marred, or vulnerable. But this is also a book that is very much about the possibilities and impossibilities of language, too, and the ways in which we are emotionally and physically inscribed or marked by language, as well as the ways which we attempt to inscribe ourselves or leave our mark upon the world through language.

As a reader, one of my favorite things to see is a noun converted into a verb, as in “Sleepless Graffiti”: “moonlight juke-boxing its twangy lobotomy.” What are some of your favorite ways to play with words when writing poems?

I love to challenge the assumed stability of language as utilitarian, as taken-for-granted, through rendering it unfamiliar, shiny, and surprising—through virtuosic metaphors, or verbing nouns, or kaleidoscoping adjectives, or foregrounding sound/music, or revealing the slipperiness of signifiers, I want language to emerge as a fluid, shimmering, rapidly transforming, performative, and shape-shifting, jellyfish-like organism—material, living, fluid, sometimes opaque, sometimes transparent.

Roripaugh accomplishes exactly what she says she set out to do. The language is musical and fluid. One poem slides into the next, a smooth metamorphosis of thought. While remaining utterly vulnerable to the intensity of emotion and language, the reader is enveloped in each poem’s cocoon like the astronaut’s bride on the cover. This is poetry that invites exploration, both of its contents and the reader. Dandarians is worth every moment spent reading it (and reading it and reading it).

Jillian M. Phillips is a feminist poet and writer from Northwestern Wisconsin. Her work has appeared in The Manifest Station, NonBinary Review, Heavy Feather Review, and others. Her chapbook, Pretty the Ugly, was a finalist in the Emerge Literary Journal Chapbook Contest in 2013 and was published by ELJ Publications. Jillian holds an MFA from the University of Nebraska’s MFA-in-Writing program. She is currently editing an anthology of body poetry with Matthew Silverman, Parts of the Whole.