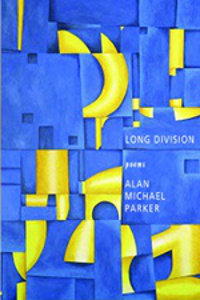 The title of Alan Michael Parker’s most recent collection, Long Division, reveals a dialogic tension that the twenty-first century poet can’t help but consider—if not in his poems, then certainly in his heart. Parker’s recurring discussion of simple mathematical concepts, in poems such as “The Biologist from Pennsylvania” and “Family Math,” takes on the surprisingly quintessential counterpoint between those forces which we call “the practical” and “the poetic.”

The poems are more ruminative than, say, O’Hara or Halliday, with whom Parker shares a conversational style. “Twenty-six years ago,” Parker tells us in “Family Math,” he “studied abstract thought,” and you might believe he’s given it up, owing to his unpretentious style, but it’s in there, hiding behind that simply poetic guise.

While the language of Long Division is candid and conversational, the poems have a smoothly loping, considerate force. Parker is a master at coaxing the enormous from his misleadingly uncomplicated conceits. He “scouts” images (and concepts) for their poetic potential—and the way they bloom is proof to the reader of poetry’s inherent possibility everywhere—surprising us, and revealing a certain love of the imagistic “trinket” with “The Take-out Menus in the Lobby,” a year in the life of—what else? The titular menus are

forgotten by the Super in the military light.

When the doors spin and the wind blows in,
the take-out menus in the lobby lift and settle

softly as a sight, astonished as the moon.

There is a keen postmodern nervousness in poems such as “A Fable for the Persistence of a Dream,” but rather than letting the work sink into despair, he reveals his preoccupations in shimmering details and conceptual recalculations so swift and effortless we might call them a sort of sleight-of-hand.

I go to work, to the 27th floor,
to keen all day—
What has become of us?
How shall we know? Where has it gone?
Love, come home—
at the useless moon, the stupendous moon,
the vagabond, bewildering, unfaithful moon.

These poems exist in an accelerating contemporary America and Parker acknowledges it—but almost in passing. His aim in the writing of his “fables” (of which there are four) is not to reject the contemporary, but to find the timeless and personal within its midst. It’s a consideration familiar to anyone with a pressing concern about “the times,” but culture is not imposed by some unjust Other in Parker’s poems. Nor is economy. Rather, they arise of their own volition.

Where he rues the imposition of the “zoomburb,” or burgeoning suburban tract, on nature, and the weird, revisionary attempt at re-instilling the latter via the “park-like-park,” Parker betrays a certain respect for the practical imposed upon impractical conceits and the way these opposing forces coalesce. Scattered throughout the collection are a series of lists, a literary format ostensibly more “realistic” than the poem, with each numbered item landing haphazardly along the functionality spectrum. “Eighteen Ways to Consider A Neighbor Whose Holiday Lights Stay Up All Year,” begins as a full-throated poetic exercise with the possibility that “1. He’s hopeful.” Further items dance from enchanting (“3. This is how he treats his body.”) to the humorous (“8. He knows my father-in-law, and they’ve conferred.”) to the curious (“12. When in Rome, burn.”), before ultimately ending it with a winking jeremiad on presumptuousness: “18. I, with my little words that always go out.”

These are not, at their heart missives. Instead they are accounts of the preoccupations of the good-natured poetical sort.

In “Fable for Our Anniversary,” Parker creates an entire fairy tale economy, trading a sack of rice for a knife, candlesticks for a goose, a pink bonnet for a sheaf of wheat, the smell of linen for some show tickets; and alerting us to the unexpected equivalencies of the ephemeral and fantastical.

There is a certain playful wariness regarding the aging process. In “Night Bus in Vegas,” Parker defamiliarizes a common image, a fellow passenger with “hip-hop muffled in his earbuds, / the backbeat big enough / to feel.” His attention to the precision of his sentiments is enviable: the image works across generational gaps. And so too does anyone who’s taken a long Greyhound trip—man or woman, young or old—recognize that “[t]he bus at night / is a place in space with different rules.” In “Down Winding, Cobbled Streets to the Sea,” Parker regrets the helplessness of entropy (“The boardwalk lies in splinters/as the summer bikes await dismissal//where the town meets the sea/on the tip of the tongue”), before negating the thought with the recognition of its cyclical position (“and turning around and tumbling/the shells polish their history.”)

Though the images tend to resolve themselves by way of humor or bright-eyed gratitude, there is a political undergirding to it all. Indeed, the intellectual heart of this book might be found in “My New American Lawn,” a poem in which Parker discusses a good-natured incredulousness at the classic American sport of keeping up with the Joneses.

men like Fredrick Law Olmsted
or Robert Moses, or let us blame
football once, again,

or excoriate television
(I love television)
for the year-round daydreams

we exercise as acts of competition.

He follows this with a deceptively tender interjection of poetic anxiety.

I blame me, for it’s true
what I want to believe

about ryegrass or zoysia or thermal blue
isn’t what I feel.

Perhaps, then, Parker’s most salient preoccupation is revealed by the koan he offers two errant rabbits he’s found in his garden. “Hop away,” he implores them,

hop, hop…
free of the human need to name, or our crude ambitions
to see whatever light we hope to see,
and hop up and down as we shout the light! the light!
before we’re devoured by mystery.

Joshua Kleinberg lives in Ohio with his wife Nicolle and central heat.