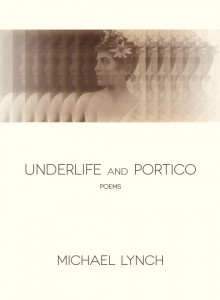 As I read Michael Lynch’s Underlife and Portico, I kept thinking about what another poet once told me: “Seamus Heaney’s poetry comes as close to pure sound as you can get and still make sense.” During the first read, I didn’t care what the poems were about; I simply reveled in the lush soundscape. However, when I returned to the collection, I found poems that “costume / everything and reveal it again slowly.”

The speaker of “Small Thanks,” the collection’s first poem, addresses the skyline, calling it a “voluptuary of every morning / frotteur of horizontal pink vastness.” The rest of the poems echo in the shadow of this charged skyline, which frames “peri-urban / houses candy-hued between the dawn- / damp hedgerows & the prim / march of garden snails creeping / to unknowable victories or failures.” Basking in what he calls “daywhelm,” the speaker concludes, “I am small & grateful & among.”

“Song of Suburbia” recalls Whitman and Koch in form and tone, but something slightly grayer than nostalgia lists in the humorously ecstatic cataloguing of middle-class miscellany. Directly addressing sock drawers, the speaker says, “May you be spiked forever with rogue golf tees, the ubiquitous Playboy/ secreted always in your depths.” Continuing through the house, the speaker praises, among other objects, “cut-glass decanters,” the “green glow of banker’s lamp,” a “furbished stereo console,” “corrugated carport overhang,” and a “Fair Lady still jacketed and unmolested,” which he implores “Endure beneath the sunburst / clock and the swirled plaster of the ceiling spangled / with flecks of light!” In the penultimate stanza, the irony dissipates, and a bitterness emerges: “O soft, skylit corridors and childhoods murdered in each room / remain, remain!” Lynch ends the poem: “Remain unchanged as the dioramas forgotten in library storerooms, pristine, / delicate as embryos, dazzling as miniature scenes jeweled / into enamel eggs.” Here, the decorative becomes beautiful, and the poem sinks beneath the gaudy surfaces of suburbia, revealing a true luminescence.

A loneliness akin to the loneliness that haunts many of Hopper’s paintings and Cheever’s stories suffuses Lynch’s poems. In “What the Letter Said,” a poem suggestive of either a suicide note or a “Dear Jane” letter, he writes, “That the morning was delinquent, / embarrassed with lingering stars,” and later, “That the house was empty. / That the tide had deserted / hundreds of tiny sea stars in shallow pools—/ their soft limbs shrinking / from fingertips, to be scropped / into the beaks of gulls.” “Substantial Factors” begins, “That year we all wore flowers in our hair. / You, your plaited halo of daisies / and me, my gushing exitwound of ivy / ringing a suggestive central orchid.” At the end of “Lost,” the speaker says, “In our defense, shouldering paths through doorways, excuse me / can sound like kiss me—bridled, desirous tones.” The ekphrastic poems “Afterword: Oil on Canvas” and “Afterword: Pen and Ink” describe a couple making out in a parked car. The latter poem ends:

The scene aches for intervention—chariots
hoisted into the flyspace, a flight of doves
bursting from the glovebox, but there is no relief. Only whiteness
bunching in the blacks of his pupils: flecks of moon, or dashboard
glow, or some distant source
we are left to imagine.

Disorienting and disquieting, this ambiguous light shines on both the portico and the underworld.

Sensual and visceral, Lynch’s poems are “heavy near bursting.” They recognize but see through the ennui of suburban life, and they unveil a natural world in which we see “[t]he rhyming color of lip and areole,” “night’s starred cartwheel,” and “alleys of sunlight.”

Jordan Sanderson earned a PhD from the Center for Writers at the University of Southern Mississippi in 2007. His poems have appeared in several journals, including Caketrain, Double Room, The Fiddleback, Phantom Limb, and Spectrum, and his reviews and criticism have appeared in The Hollins Critic, Rain Taxi, and other journals. He currently lives on the Mississippi Gulf Coast, where he teaches English.