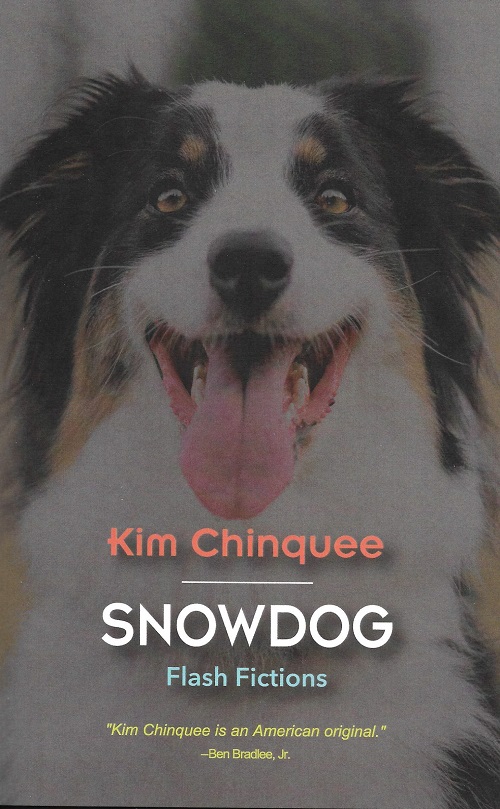 At the crux of many people living in the humdrum of isolation and taking in stories quickly through social media, the “queen” of flash fiction Kim Chinquee’s new collection SNOWDOG satisfies taking in the brief and wandering details of everyday life.

Oddly enough, the connecting factor isn’t solely people. Nearly every story within SNOWDOG features dogs people own, used to own, were shared between couples, or exist in memories of some sort. Dog themes and associations are even worked within the titles such as “Companion,” “Walking the Dog,” “Sit,” “Rescue,” and more.

SNOWDOG begins with a welcoming introductory story, entitled “Snowmaker.” Written in a clean, friendly tone about Kim, who is the narrator in most of the stories, she describes herself as a woman in her fifties on a ski-trip with her boyfriend. Kim shares mulling thoughts about her son and his wife, also named Kim, therefore coincidentally sharing the same first and last name as the author. Throughout the first few stories of SNOWDOG, each about a page length in average, humor is similarly nestled in parallels and nostalgia. Take, for instance, a set of twins named Mick and Dick whom Chinquee recalls growing up with, who also had a set of dogs with the same names.

While the language in SNOWDOG is simple and sweet, the connections become more complex as the collection continues. The slice-of-life elements have all the detail they need to be relatable, while still showing a window into a mind of continuous thoughts. This is accomplished through Chinquee’s ability to write succinctly, transport the reader, and allow them to draw their own conclusions. An example of this is in “Dogfight,” in which Kim arrives home during the aftermath of her dogs fighting. Although there is no explicit scene where the dogs fight, it is implied by their guilt, and the blood on one of her dog’s ears. Prior to catching the residuals of the fight, Chinquee writes, “I’ve just gotten a haircut, a massage, and my body feels like butter.” Chinquee’s observations, although fleeting, are all important, while simultaneously being besides the point of the main event. But the suspension of the moment Chinquee briefly captures on the page is poignant and necessary.

In fact, none of the stories in SNOWDOG are particularly eventful. Chinquee’s micro-stories tend to follow a trail of mundane ruminations—yet they are far from banal. In some ways it feels like Chinquee is taking field notes on her observations as a fly on the wall, while other thoughts feel contrastingly connected, complex, full of thoughts and details from memories, but often not the full memory itself.

Despite the ease of reading, Chinquee writes smart, minute details; some stories take the form of chunks of prose, while others are poetry. In “Snow the Blow” the phrases are concise and cutting:

He’s better than a paycheck.

Here, the wordplay is delicious, with fluid rhyme, alliteration, and reference to pumpkin and cheesecake.

In “Habitual,” the narrator Kim gives seemingly random details about her therapist that combine to give us an understanding of the character’s life: “Her son is eight, borderline autistic. She went on leave last year because of migraines, then got in a car accident, and had to learn how to write again.” In addition to the jolting ending of a therapist unraveling, “Habitual” may be the strongest story within the collection.

In more story-like pieces like “Goldendoodle” the focus is on the small, precise relationships between people. Instead of the story focusing on Kim, it discusses characters Jim, his girlfriend Elle, and the dogs they share through their occasional long distance relationship, as peculiar details of neighbors weave throughout less than a page and a half.

The presence of dogs as a recurring theme in SNOWDOG brings innocent awareness to memories of social interactions. Incorporating dogs is a seemingly simple element of companionship and relativity. On the other hand, it inadvertently highlights our social animal nature and how our animals are sometimes at the forefront, and other times the periphery, of these interactions.

Evan as a collection, each individual short story in SNOWDOG is satisfying and made for attention spans looking for something more without the burdensome commitment. Chinquee’s writing is a prime example that a story doesn’t need to be lengthy to be thoroughly visceral and bubble up feelings of nostalgia. The lesson of SNOWDOG is that there is something inherently impactful about memories, particularly when connected by micro-details.

Naya Clark is an Atlanta-based freelance arts and culture writer. She has a BFA in Journalism from Georgia State University and is an assistant editor at Urban Ivy. Her interviews largely focus on literature or the legacies of underground, DIY arts communities. Her work has been published in Southern Humanities Review, The Rumpus, Split/Lip, The Literary Review, Plasma, and others. She tweets often from @NayaPhilosophy.