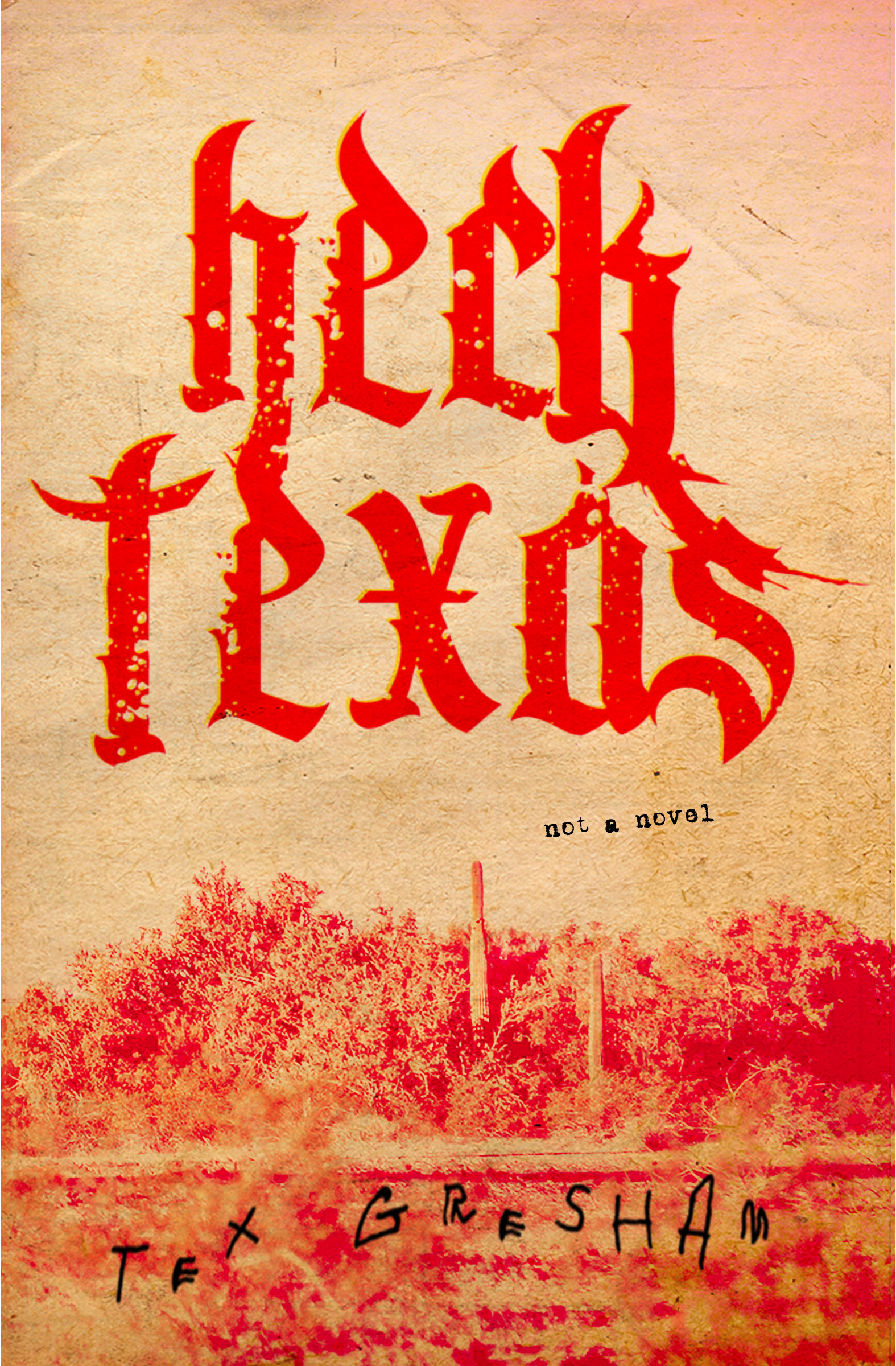 “I’ll start my review of Tex Gresham’s Heck, Texas with a contrast,” I thought. “I’ll look up some wholesome facts about Jasper, Texas, the community profiled in the book, and then highlight ways the town’s officially-projected personality differed from Gresham’s caricature of it.” This was the idea, but it took nothing more than Wikipedia to discern that Jasper, Texas, is a truly a shithole of monumental proportions. A town of 7,500 people shouldn’t gather national attention for being a dump, but that seems like Jasper’s claim to fame, even before Gresham decided to flick bits of it onto the page.

A few facts about Jasper I will share that align with Gresham’s depiction, rather than wholesome facts for a contrast:

Heck, Texas (which is specifically called “not a novel” on the cover) offers glimpses into Jasper and nearby locales through overheard conversations, found notes, sharply described scenes, scrawled drawings, and hazy photos.  Each chunk of Heck, Texas consists of a line to a few pages of print and/or mixed media. You might say it’s a work of flash. I wouldn’t call it a poetry collection, though it clearly contains poems.

Creatively imagined, the glimpses build into an uneasy familiarity with a mythical-redneck hillbilly-whisky/tango vortex of confusion where time and history are subjugated to clarity of image. For example, one section states:

“Dab on him before you kill him.”
This was something overheard at a Klan rally in the Wal-Mart parking lot in Tomball, Texas (1993).
This was the origin of the term dab.

Everything in this history is mixed up. “Dab,” current term from black culture is attributed to white supremacists almost three decades ago. It seems absurd because “dab” is still in the current consciousness (though perhaps fading), but is this appropriation really that far from the types of historical revisionism proliferating in rural, white places? Having grown up in in a rural white place, I will confirm shit gets ridiculous. Did you know the Civil War wasn’t about slavery?

So, too, can I relate to the mystique of tennis shoes tied together and tossed over a powerline, and the urban legend that the shoes denote the location of a meth house (or crack house, depending on your region). How obvious displays of widely known symbolism have alluded the police, I cannot say. Under a picture of sneakers on a wire, Gresham includes the lines:

children grow up knowing that this means a meth house is near.
some children have sleepovers at these houses.
after the kids go to sleep, the parents get high
and swing at each other with cleavers.
they make eggs and bacon the next morning, still high.
they never mistake the sea salt for more meth.
but sometimes they mistake the meth for sea salt.

In Heck, Texas, children grow up around drugs and violence, then they draw pictures of drugs and violence at school. Residents swap fucked-up stories from childhood, knowing that many of them are true, stories of abuse, neglect, addiction, loss, dementia, incest, and more. What Gresham gets right is the way people in the community learn about one another’s shit-filled closets. People overhear neighbors speaking in a line at a store or talking on the phone. They might read an anonymous plea on a message board, maybe Craiglist, for a lost lover, or a loved one. These fragments reveal the ups, downs, ins, and outs of rural Texas, and rural America.

There’s one scene in part two printed in tiny font that takes up an entire page. “You take your time getting ready,” it begins. I have to admit that, as a reader, I am often not stoked on the second person POV craze going on for a bit now (I don’t need to be interpolated as the character to empathize with the character), but it works in this piece. That’s why it’s important to keep an open mind about things, even overused things, like second person. Because sometimes it’s a good idea and you don’t want to miss it.

In this scene, a person prepares for a date before a mirror. They squeeze a zit and it pops. Like Monty Python’s Mr. Creosote and his torrential vomiting, the whitehead gushes pus until it fills the room, drowning the protagonist and spoiling their upcoming date: “Your date will always remember you as that person with the zit pus.” Seems likely. Pus is an apt placeholder for self-hatred, for anxiety, for the disgusting doubt we carry around, the kind that, if you pick at it before a date or an interview, overwhelms you.

The zit scene could be gross—is gross—but with pus, Gresham reminds us why we need abject imagery to convey abject aspects of life. The abject is often what is most common among us and for us to trust and empathize with literature, writing must offer them depictions of the abject. There are times when the abject cannot be reached by realism, times when realism would make something unreadable or exploitative. When the abject is absurd, we relate to it because, often, the abject aspects of our own lives are absurd, too.

As a practical note here near the end, Heck, Texas has Harmony Korine’s Gummo meets Nick Pizzolatto’s Galveston aesthetic. Fans of Trailer Park Boys would dig it, too. If you’ve read Steven Dunn’s Potted Meat and you enjoyed it, I strongly suggest checking out Heck, Texas, and vice versa. All these titles here explore rural white America’s unhealthy psyche through a combination of absurdity and unflinching realism presented through flash.

In closing, how guilty you feel about the classist jouissance of laughing at how fucked up rural people are correlates to how much of a fucked up rural person you are. If you’ve lived an private school and Ivy League life from day one, you may want to listen to Gresham’s characters more than laugh at them, but those of us who grew up in rural America will recognize our families and neighbors in Heck, Texas. Every town has their Ishmael Dick, who is Gresham’s murderous local pseudo-bum. We know someone from our high school who’s a meth head. We’ve heard racist, homophobic ideology from the same people who preach Christian ideology. And we all know someone who holds in their shit until they injure themselves, right?