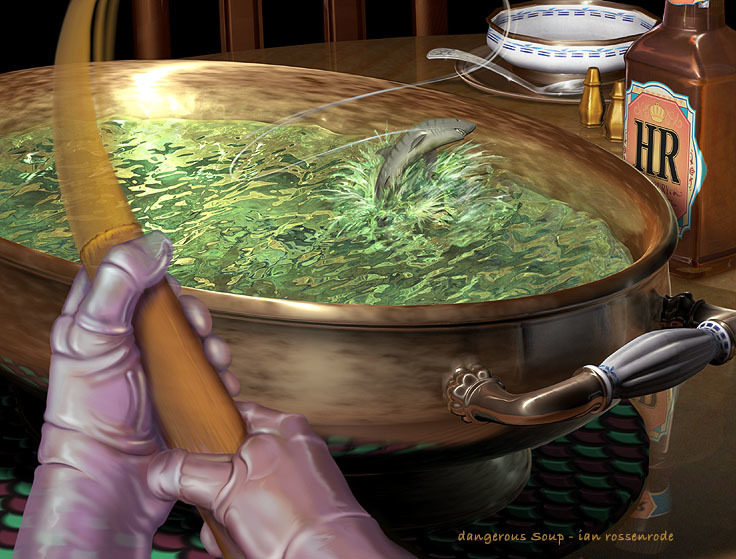 “It’s fabulous. He’s outdone himself. This is the best soup we’ve ever had!” —The Johnsons

“My friend used to work here and he was like, you know what they use in that soup? It’s human sweat. It’s human tears. And I’m like, bullshit, Rodney, he’s always been such a liar. But he’s like, I’m serious. They locked me in a room and tied me down and made me watch the thing I’m most afraid of. He goes, they showed me a tiny me, a miniature, and I was in this cubicle wearing a cheap watch and surrounded by a bunch of other drones. Hell yeah, it made me sweat, he said. He quit not that long after but I don’t think he’s recovered.” —Tina

“I know what scares you.” —Chef Vink

“What have you done to me … I wake up every morning and there is … despair … I feel my insides moving around inside me now … have they flipped flopped? … is that what you put in the soup? My guts?” —Rodney

“I ordered the soup. Tasted like soup you know but better. Wife said she would have used more pepper but IDK. I was like, good soup, but where’s the meat? But then it was like wham, knock my teeth out, cuckoo birdy around my head. The soup made me have what I can only describe as a religious experience. If I believed in Jesus I would say the soup made me look in his eyes, like I flashed out of the restaurant somewhere pure and bright and glowing, and after it was like where the fuck am I and how the fuck can I go back there again?” —Gordon

“Did you ever consider that before great clarity comes a moment of absolute terror?” —Chef Vink

“You knew what scared me. Goddamn it, nobody knows that.” —Amy

“I heard y’all paid better than any other restaurant in town and you didn’t even need references to work here. Seriously, I’m thinking, seriously?! I’m thinking it’s going to be easy to make good money. But then I had to go in that room! Oh man, that room! It was like you knew exactly what wakes me up in the middle of the night every night – my mortality, the yawning, gaping void that I know follows this life. I even saw shifting oblivion! You want to tell me how you knew that, Chef Vink?” —Terrence

“We know what scares them.” —Chef Vink

“The soup was good and all but everyone’s been telling me it’ll change your life and not just your eating life but everything else so I’m going in here and I’m thinking I’m going to eat it and BOOM get a new girlfriend and BOOM get a new job and BOOM jolt out of my depression and for days none of that happens and it’s the same old thing but then BOOM here comes Liesl and at the telephone company they’re like hey Micah, want a job? and then, here’s the weirdest part of all, I’m enjoying seeing the sun rise. But I didn’t like Liesl as much this morning and my coffee tasted real bitter so I’m thinking I better get in here and eat another bowl of that soup. Shit, this is my last $100 so it better work again” —Micah

“I’m gonna find a way to sue you you asshole I’m going to find a way to do it. I think about it every night how I could do it, how I could make it happen. I think about that room you put me in, that room with my dead grandfather, and I see his face slopping around, the skin swinging from the jaw, and what am I gonna tell them I’m suing you for? Not for that obviously, I’m not delusional. I might sue for OSHA noncompliance, I guess. I mean, shit you always left those knives out.” —Mary

“My mother has always been a frigid woman, too cold to give her children hugs after school. I believe she has never wanted to behave as she does; yet, she had no alternative. Indeed, perhaps that was the very reason that she wanted to eat the soup here. She wanted to be different. Let me cut to the chase and suggest your soup helped her make a remarkable change. A week ago, she patted my knee warmly. Yesterday, she made me a birthday cake with shaky-handed icing, and even invited me to the zoo. All the things I ever wanted – and your soup was what helped change her life. And mine.” —Danica T.

“You love what scares them.” —Chef Vink

“They’ve cut me off. One bowl per customer per day. Shit man!!! A person cannot exist on soup alone and I’ve found that I can’t eat anything but what you’re serving here. It’s a better high than I’ve ever felt before, like that soup is flowing through my veins and giving me the fatherlove and motherload and existential realization that I never got from drugs. I can’t eat anything else man. I drink water and it makes me want to cry. I eat bread but it sits like a stone in my stomach. You’ve gotta up your limit, you’ve gotta let me have more. What’s in the soup, Vink, what’s in it?” —Archie

Alicia Bones is a Seattle-based writer and college instructor. Her work has been published in Vol. 1 Brooklyn, Paper Darts, Fairy Tale Review, Pidgeonholes, Necessary Fiction, Jellyfish Review, and elsewhere. She spent a lot of time watching Are You Afraid of the Dark? as a kid.