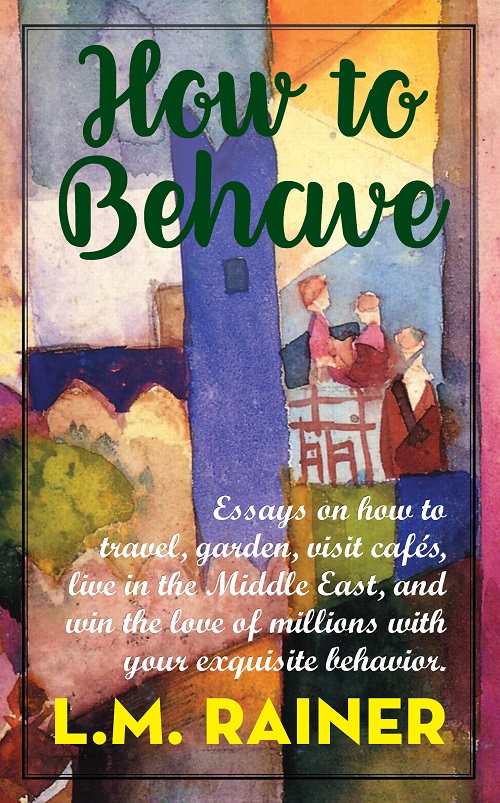 There’s an exchange at the end of Flannery O’Connor’s “Good Country People” that encapsulates L.M. Rainer’s style in her collection of essays, How to Behave:

Mrs. Hopewell: He was so simple, but I guess the world would be better off if we were all that simple.

Mrs. Freeman: Some can’t be that simple. I know I never could.

Simplicity isn’t for L.M. Rainer either. Instead, she argues for what I’ll call Ethical Diva-ism (and all humans, according to her, can be divas if they so choose), a philosophy that celebrates good manners, sure, but also complexity and intrigue.

The good manners are codified up front in essays with names like “The How to Behave Edicts,” “How to Behave Like a Diva,” “How to Behave at Your Spa,” and “How to Choose a Café,” where we learn lessons like, “Good intentions will not suffice. Act properly or stay home;” and “Every action is complicated and requires much thought;” and “One can do a lot of good in the world if you aren’t concerned about who gets the credit;” and “Divas are always interested. Always curious. Never nosy,” along with plenty more.

If the collection were only rules like the above, I’d’ve checked out right quick. But this is a book with a familiar, or a Muppet, I should say, and it’s Miss Piggy (who is listed as a being we all should emulate, though I personally would choose either Statler or Waldorf). This is where the complexity comes in. So along with the ethical edicts (which we can see as Miss Piggy talking in her sweet voice), we get lines like this: “Occasionally over-act, it gets the blood going and if you can’t stand a little attention, live in Nebraska;” and “Don’t talk about a subject you don’t know anything about if there is a good chance you will get caught out;” and, after encouraging us to lie in various situations, Rainer says, “Oh no, you did not just say ‘Lying is wrong …’ I am not related to Puritans,” which we can hear in the voice Miss Piggy uses while delivering a karate chop.

If it isn’t obvious yet, this book, especially in the early going, is, thankfully, ironic to the extreme. The introduction tells us that we should read How to Behave in public, and that when we do, “Be assured that you are looking quite fabulous today.” In the essay, “How to Be a Bad Example Auntie,” Rainer says that her actions come from the fact that the people in her family are entirely too nice, and there must be balance: “Do you have any idea how difficult it is to be around people who don’t nurse grudges, don’t resort to irony, who are honest and kind to strangers? Utterly exhausting.”

But just when you might think that Rainer is some kind of monster (a fantastically sarcastic, Muppet-like monster, but a monster just the same), perhaps one of those who believes in American exceptionalism, who acts like the jerks on reality TV, she floods her collection with humanity when she moves to the Middle East. Don’t get me wrong, though. She doesn’t change her personality. Instead, she shows you how Ethical Diva-ism works.

With the help of a man she sometimes calls her butler, sometimes calls her gardener, but always calls Luxchman, Rainer manages to plant a garden and erect a canvas tent around her rental villa (a cement block house with industrial carpet). If she would’ve done nothing but boss Luxchman around, then we could all dismiss her and go on with our lives. But that’s not Rainer’s style. Instead, the two work so well together, even though they do not share a language, even though Luxchman does not always understand what she wants him to do, that by the end of their time together, they are not employer and employee, they’re friends.

From there, Rainer continues to travel around the world (Italy, Malta, Zurich, Vegas, even Vermont) showing you how her version of a diva goes about living. Earlier in the collection, though, Rainer says, “Simply because you have stated that you want something doesn’t mean you will, in fact, receive it.” This, of course, doesn’t sound like something a diva would say at all (everyone’s favorite diva line: “I said no green M&M’s!”). Yet for Rainer, a diva is someone who does like attention, who is interested in intrigue of all sorts, who doesn’t mind causing intrigue, who loves people watching, who is most certainly judgmental, but is only malicious when someone else throws the gauntlet down first: “Although all correct thinking people are nonviolent by creed, Miss Piggy instructs us that some people do not need sympathy or understanding, they need to be karate-chopped. Do your chopping with flair, finesse, and good sound effects.”