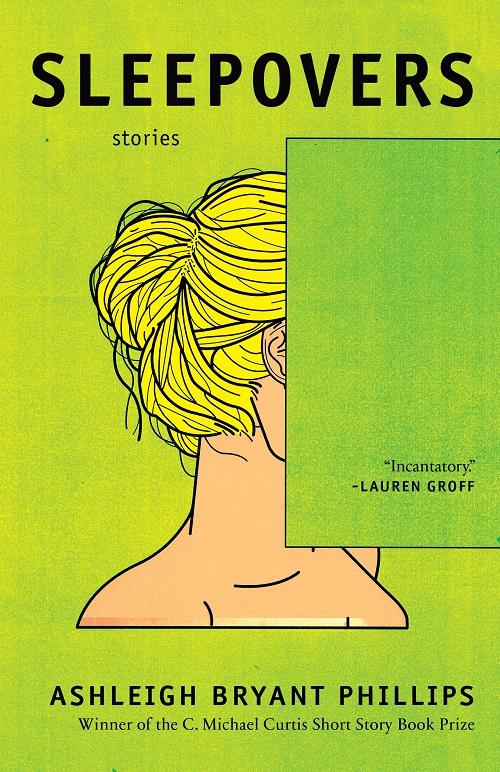 I first read Ashleigh Bryant Phillips’ work online a year or so ago. I was taken by the narrator, the kinds of characters she wrote about, by her obvious tender affinity for her characters as well as her razor sharp determination to stare truth in the eye, to refuse to blink.

Phillips’ debut, Sleepovers, in its display of rural, small town folks, is a quietly radical book of short stories giving voice to people often overlooked in literature. Being from a small town in western Pennsylvania that’s been ravaged by drug addiction and unemployment, I can’t explain how good it feels and how rare it is to find good work about those kinds of places that displays life honestly. It is such a rare treat to read good literature that is taken seriously about these kinds of places and folks, often, I believe, because those who craft it have no idea what they are talking about. It either quickly veers into parody or is overly dramatic.

In Sleepovers, the individual stories in this collection sing out wildly and beautifully on their own, but also, importantly, deftly cohere. Rooted in a sense of place and voice that feels natural and not labored. It is an exciting and refreshing book and marks Phillips a unique voice in a sea of contemporary posture-core writers. She cares not for the trappings of the surreal or postmodern—there are no tricks here, no clever in-jokes, characters do not stare out their Brooklyn apartment windows in medicated detachment, there’s no ironic stabs at our modern condition (thank God thank God). Phillips writes from a place of radical honesty, of true human compassion. She is writing to share and invite people in, to create a space to engage with the reader.

In Sleepovers, Phillips writes about her rural hometown of Woodland, North Carolina. With an almost hypnotic perfection, she crafts her character’s voices and often, like the best fiction, the text feels as if it is vibrating off the page, is being read too you, like some kind of secret transmission. Her attention to detail regarding voice in the predominantly first-person collection is uncanny, and like the best magicians, she keeps the hard work hidden, makes it look easy.

First-person narrators are oft-employed for their trickery, their ability to toy with a reader, to get them to question the veracity of the events of the plot. Here, however, Phillips employs it to draw you close, to fully absorb you in her characters’ lives. In this act, there is an implicit question being asked by her characters, do you see me?

Phillips’ stories are equal parts tender and razor sharp, but one-hundred percent sincere. The bravery of the collection and Phillips lies in this equation, in her complete commitment to showing us her characters, their lives, and the truth about them. To not take the easy or even more understandable way out.

In one story, a grade schoolteacher acts as a role model to a young girl, but in the tale’s final moments, the young girl hears her teacher talking on the phone about how she hates being at the school in rural North Carolina, how she misses the city and culture. It wrecks the girl, and us, by proxy. A lesser committed writer would have simply allowed this teacher to be a savior for the girl, a salve in her otherwise harsh life.

In another, a woman sees her less fortunate neighbor fucking his dog, but still chooses to bring him food in an act of kindness, despite his transgression.

The focus of all the stories in Sleepovers is equally devastating and beautiful, fully and completely committed to the beauty and complexity of life and giving a cast of characters who are often denied these displays their fair due. She doesn’t use them because she has a bone to pick, but simply allows them to be. What’s clear, through all their tough moments, is that Phillips loves these people and is asking us if we can love them, too. She is a cinematographer filming her characters in beautiful close ups, like movie stars.

In one story, a woman has returned home for a college break. She attends school in a city some miles away. The reader can feel a tension in the woman narrator, between her life at school, and her life with the folks from her hometown. I asked Phillips if she could speak to that feeling at all. She told me, “From the time I left Woodland to go to college I started oscillating between two worlds. It’s a lonely space to inhabit because you know you’ll never be fully satisfied in having both your worlds together. It makes me sad and restless knowing that neither one of my worlds will really understand the other. But as someone in this position, it’s my responsibility to at least try, in my own way, to create some sort of balance.”

Sleepovers won this year’s C. Michael Curtis Short Story Book Prize with Hub City Press and recent stories from the collection have appeared in Oxford American and The Paris Review. A celebratory prelude to what will surely be an exciting launch of one of the best story collections I’ve read in years.

Nicholas Rys is a writer and writing instructor living in Syracuse, New York. His fiction has appeared or is forthcoming in Hobart, BULL, Lake Effect, The Antioch Review, and others. he holds an MFA in fiction from Bowling Green State University.