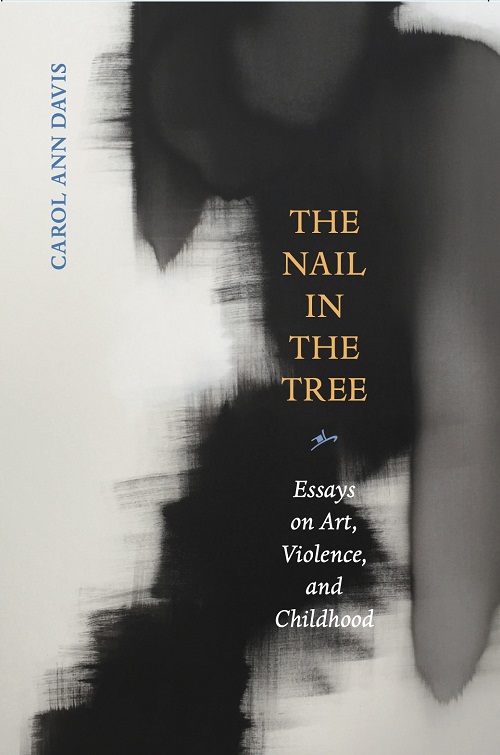 About twenty years ago, I felt buried under the usual family problems that most people face. I complained to my sister that while I didn’t expect anything miraculous, I would appreciate it if life would just get a little easier. Her short response was, “But life isn’t easy. And it’s not hard. It just is.”

I thought about how life just is while reading The Nail in the Tree: Essays on Art, Violence, and Childhood ​by Carol Ann Davis. The book is a reflection on how her family and community were affected by the mass school shooting in Sandy Hook Elementary School. Since her older son was enrolled at nearby Hawley Elementary, and his younger brother was home, this is not a collection that contains details about the shooting itself. Davis expertly controls the narrative threads of their day-to-day reality while explaining what inspires her to write. Further into the book, these intimate details open up into a wider scope of the connection between life and art. She accomplishes this without appropriating the grief of the families with murdered children, instead The Nail in the Tree ​tells how Davis’ life became what it is.

Davis’ unique perspective allows her both the insider’s and outsider’s viewpoint. Her family moved into the area about a year before the shooting, so they don’t personally know the victims. But she witnesses the effects of living this/close to a tragedy. Weeks afterward she’s at a park looking at the children running and playing. While the adults watch over them she wonders “how are they not scared all the time? But that’s us, not them. It’s we who look upward brokenly, not them. We forget we are the scared ones twenty times a day, and not before we have said with too much force: You will stay near me. You will​​.” The quiet honesty of this passage describes how each family remains together, but there is a space separating the parents from the children. Davis explores the existence of this emerging chasm while navigating how to continue living with, but apart from, the normal her children’s lives became.

The idea of before and after is the first hole Davis encounters. During her workday at her school, when she’s given the news, but few details, about a lockdown at a grammar school, she goes “back into the classroom without knees and elbows, without joints of any kind. Minus them it is all I can do to make myself sit upright. I am forty minutes away by car and it is all I can do to sit upright enough to tell my students, end early, go and sit in my quiet office to collect my things—the things of before that will come with me to after.” She heads into her unknown by hanging on to the comfort of something familiar. Students are dismissed. Items that were needed before, that might  be needed again are collected. She finds strength following a routine based on the life before to help her find something recognizable in the life that will continue after. The essays expand and clearly describe how and what after​ means in Davis’ life. She makes an early point about the violence that didn’t touch them: “[T]his is what it is not​ ​to suffer that day. This is the not-suffering, happy-ending story.” She has a different story to tell than the Sandy Hook Elementary parents, and she respectfully doesn’t  use their vocabulary of grief to tell hers. Any details of the mass shooting in the book are there specifically to tell her own story of what came after.

The Nail in the Tree ​becomes more than a happy ending. Davis learns to live in a life that is. The idea of having control over the safety and protection of her family is gone. But it was interesting to learn how and what she pulled from her before and brought it into the life which she still thinks of as after. The same instinct that drives Davis to pick up certain items at work in The One I Get and Other Artifacts ​compels her back to work in Before I Get Back to My Desk.​ Read together, the essays describe the two-year move from physical trauma to the longer lasting emotional trauma. In Before I Get Back to My Desk, Davis lingers over how her son’s spine looks in the light “and understood for the first time that is the image [she has] been dreaming of after working the ‘I’ entirely out of a poem that had nothing to do with [her] and everything to do with the cataract over a saint’s eye as Fra Angelico finished painting it in fresco five hundred years ago.” These few sentences describe the past/present components of inspiration in a writer’s life. Looking at today in the light shining on her son’s spine and connecting it to a five-hundred year old painting gave Davis the answer she needed to complete a poem.

Her creative process also helps her to understand what her older son Willem tries to communicate when he answers one of her inquiries with, “I’m not traumatized. Why are you making me feel something I don’t feel?” He understands the violence of the shooting. He tried to shield his younger brother from any knowledge of the events from that day. It’s obvious to her the shooting has affected him, but unlike her there is no before/after for him. He has few memories of before the shooting. Removing “I” from her reaction to his statement allows them to connect because she accepts that his needs are different from hers. Together they learn to “hold your own inside the enormous unimaginable, to dive deep and come up far from where you started.” I enjoyed reading how Davis pulls inspiration from many sources to create the vocabulary of her own voice. But the aspect of her story that remains with me is how she ​​uses this process to understand and connect to a life that just is.

Buy The Nail in the Tree at Bookshop

Buy The Nail in the Tree at Amazon

Buy The Nail in the Tree at Small Press Distribution

Buy The Nail in the Tree at Tupelo Press

Noreen Hernandez is a teacher’s aide and writer with deep life long ties to Chicago. She is a fairly recent graduate of Northeastern Illinois University English and Creative Writing Dept.