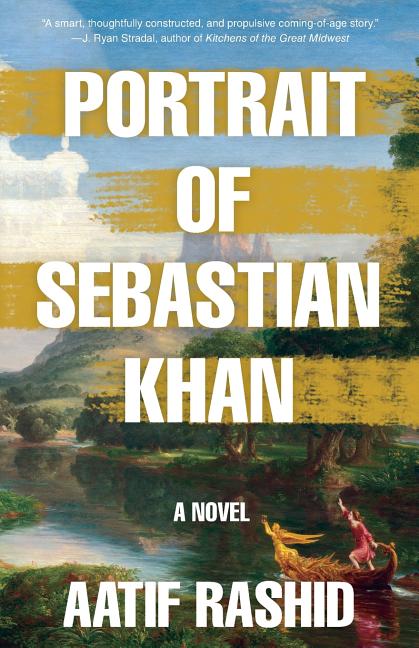 Portrait of Sebastian Khan is a coming-of-age novel of great intrigue by Aatif Rashid. Sebastian, a mixed ethnicity Muslim, is a college senior who is troubled by the time remaining until his upcoming graduation. To complicate matters, he is also a free-spirited, womanizing soul when it comes to his commitments. The novel takes place in 2011, with art history major Sebastian soon to turn twenty-two and in his final year at the University of California, Berkeley.

From the get-go we are introduced to Sebastian’s love for art and women. In these pages, the descriptions of both are vivid and vibrant—and very real to the twenty-two-year-old. Art might even be more “real” than the girls he sleeps with because he thinks of them in reference to the art. For instance: one of the girls, Lorelie, becomes a siren because of a painting they are both looking at. Here, Sebastian instantly thinks “the profile … looks so much like Lorelie.” This observation is probably untrue because he is very, very drunk at that moment, but he always ends up falling for girls because he only sees them from this skewed perception. He falls in love numerous times this way until it becomes a toxic cycle.

For the most part, Sebastian’s struggle with women seems to stem from his mother’s death and his parents’ relationship. His parents’ marriage was an estranged one. We learn about the relationship mostly from his various flashbacks, but also his conversations with his father. It turns out that his father was not a loyal husband to his wife. Nor is he a practicing Muslim. As Sebastian is supported for the most part by this wealthy father, his apartment is expensively furnished, and he has ample money for the daily parties held at his studio. The parties are where we see him spend the majority of his time with his friends from Model United Nations, a club that travels the country under the pretense of global dialogue—when underneath the comradery is all about partying and having sex.

But Sebastian’s relationship with Fatima pushes him to his limit. Firstly, because she is a practicing Muslim, unlike he, who stopped praying after his mother died. Secondly, because she is a practicing Muslim, she does not drink or is hesitant about sex outside of marriage. However, such limitations are non-existent for Sebastian. He ends up cheating on Fatima multiple times. And the one time he does hold back, he is called out for his resistance. This scene is yet another moment where Sebastian and his two of his friends are going to a party, this time at a theater converted into a club. Earlier in the day, Sebastian and Harry had met two girls from Kyrgyzstan. Viola, Sebastian’s friend and later probably his only love, predicts that he will sleep with one of them by the end of the night, though Sebastian denies it. But later, when the girl in question is informed that Sebastian is “behaving himself tonight—because ‘he has a girlfriend,’” she remarks, “Is she here?” Sebastian says no. To which she answers, “[T]hen what’s the problem?”

Fatima also differs from him in a practical sense. She is focused, ambitious, and ready to face her future—all quite the opposite of Sebastian’s purposeful aimlessness, who is opaque about his present, fearful of the future. He has no economic plan for himself. He also becomes afraid of his faith in art, and questions whether art can be everlasting. In another moment when Sebastian is avoiding the Model UN with a new girl, Helena, he finds out Helena is a lover of modern art. He imagines that the word “beautiful” sums up everything he has felt in the past year: “He’d been afraid of the end of college and what lay ahead of him, and he tried for nine months to quell that fear with Fatima simply because she offered him stable future.” He further reckons that even if college ends and becomes a distant memory, the paintings that “had stirred his heart” will still make him feel alive. But in the next Model UN meeting, Helena abruptly destroys this reality:

I feel like people only like the Pre-Raphaelites because they are so easy to like, beauty that ignores any possibly ideological complication, history airbrushed of everything but maidens in castles. It’s just nostalgia of people on the verge of growing up who want to rush back to a comforting and idealized version of childhood.

Needless to say, this describes Sebastian’s obsession with the Pre-Raphaelites in a nutshell and also cuts to the core of his character. Suddenly having everything he thought he understood shattered, he struggles to argue about what makes art real, what makes art worthy, because he can’t feel it in his heart anymore.

After a quarter of the way in the book, it can be irritating how Sebastian views women through conquest, and how quickly he moves on from one fling to the next. Though he is written in a very compelling way, it ultimately helps that he is very smart. The repetition of his detailed romances becomes somewhat redundant, and it is difficult to read them with much enthusiasm after being overwhelmed by rushes of color and sensation. Being very fitting for an art student, moreover, this narrative technique significantly highlights his flawed character and provides tension for growth. However, at the same time, I could not help but wonder if having him meet so many girls was absolutely necessary. Although Rashid, to his credit, tries to balance this frenzy of sensuality with undertones of humor and even subtler splendor.

The book wraps up after this dynamic struggle of hoping for something to finally happen for Sebastian. In the end, Sebastian’s Berkeley days become, for the most part, last strokes on a canvas of grandeur and surplus. And after the ordeals with Fatima and Viola, the palate of post-graduate life is a very somber one. Yet even here there seems to be hope that he will venture beyond the troublesome portrait and change his outlook for a better future.

Mahnoor Khan loves to read and write and is always in hunt of the next book or story. But in her free time, she is either cooking or learning to illustrate. She currently lives in New York City.