PROVIDENCE, FROM TWILIGHT TO THE hour of the wolf. The hill, the river, the secret stairs behind the clock tower. Night walks, filled with nostalgia. Lantern-lined streets, haunted streets, and the sound of rain falling darkly into a storm drain. The song of the sewers. When it is night, and night again, and waiting for the night to end. The streets washed in lamplight. In silence. Unrequited love. Monumental time. Contemplation, introspection and the wisdom of the young. The sound of ice breaking in the river. Night traffic sweeping by on a distant highway. The secret city. The blue city. The city of sleep without dreams. The face of the clock tower, luminous, resplendent, a second moon in the sky. 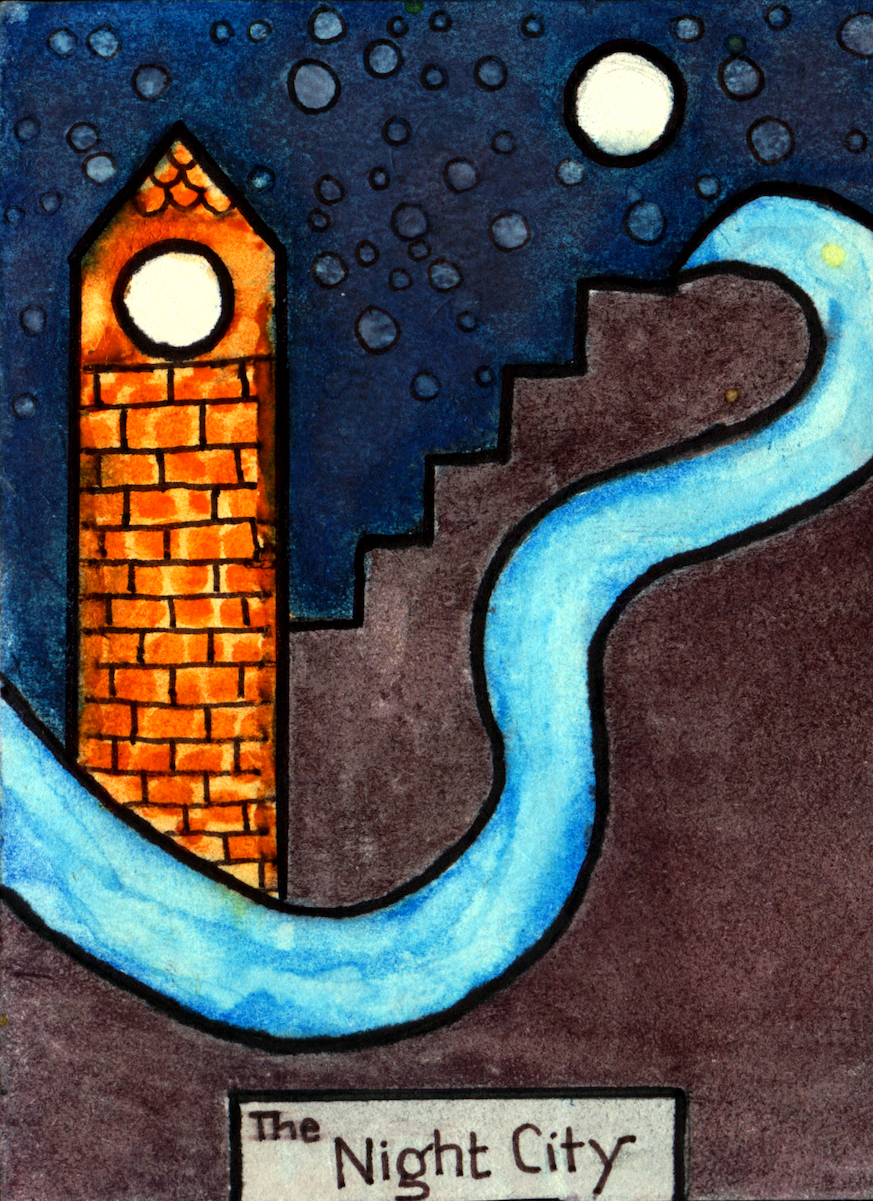 Miracles revealed inside a cave. Mirror pools, echo chambers, and the infinite reflection. A prayer that returns. A threshold where two worlds touch and touch again. Under the veil of falling water. The ice palace melted in the spring. A thicket of green. Brambles, moss, and lichen. The life-giving water buried underground. Where the dying go to die and the unborn to be born. In the damp earth. The cool shadow. The wet walls of stone. The divine voice or the voice of madness asks for what is hardest to give. Exchange, renewal, beginnings and endings. Where the sunlight does not reach grows another kind of life.

It is easier to arrive at the Magic Mountain than to return from it. The mountain can be reached on foot, by bus, by train, by cable car, and in dreams, but at sundown all of these paths are closed. The traveler must find her own way back. At the top of the mountain there is a monastery and inside the mountain lies the holy grail. Choose an angel card. Lie face down in the earth. Watch the clouds change into fractals. Love does not have to be reproductive to be love. The three points of a triangle make a star. Home is a sphere suspended in darkness. The mountain is a site, and a place of strange sightings. Magic, like stone, is eroded by linear time. 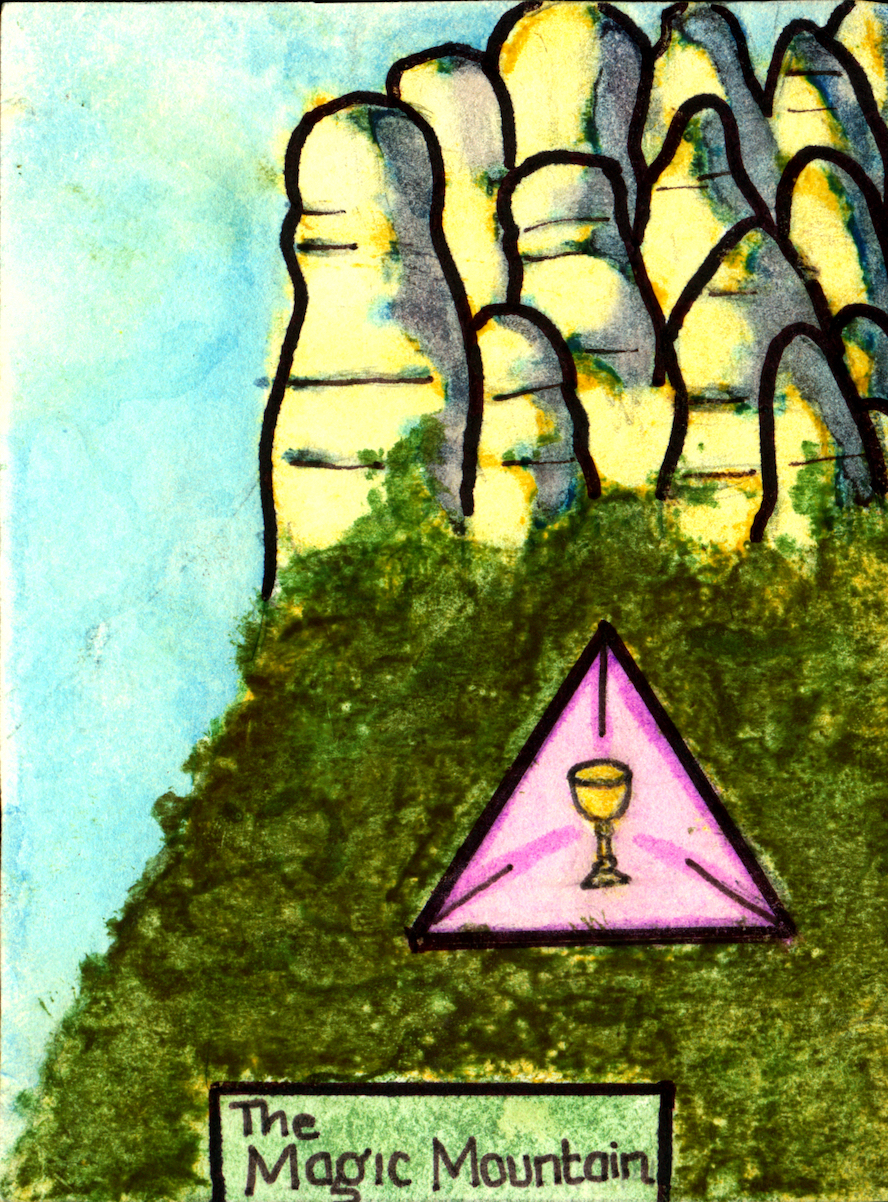 The Palace of Crystal in the park of rest. A mirage at the approach of spring. Air reflected in water and sky caught in the trees. A shimmering landmark in the distance. Departure, exile, and irretrievable loss. The remnants of kings. A relic that haunts the old city. When the wind blows, the image breaks on the water’s surface. Time seeps through the lacuna. A palimpsest of deserted palaces. Empty thrones. Melted ice and the secrets of winter washed away. When the sun shines the glass catches the many colors of light. Chambers of past and future, illuminated, crystalline.

Double Bluff Beach on a rare, sunny day. Low tide, when the pebbles are exposed along the water’s edge. At the foot of the bluff, the sand turns grey. Driftwood lies bone white on the beach. The water is blue, the mountains are purple, the sky is blue again. No one lived on the island before. The natives from the mainland rowed out in spring to harvest clams and bury their dead. A place of exchange. Something yielded for something buried. From the shore, the city is visible on a clear day, the snowcapped mountains. The last ferry blows its horn. In the heart of the island, tall trees block the light. Pockets of darkness. Enter a thick grove and the air changes. What will be buried? What will be given in return?

The Charles Bridge in winter and the Charles River in winter, at night. Memory softens the outlines of space and time. The bridge is always crossed alone, when the first snow begins to fall, or when the river turns to ice. The saints glow in their places. Pigeons alight. The city is old and grows older with each step. Five fingers touching five stars above the cross. To make a wish come true. To return to the city. To be reunited with an old friend. On the other side of the bridge is the hill and the palace, the past. Writing in the snow that will be covered by more snow. In solitude, one is not alone, but one with the self. Reflection, before atonement. A crossing that changes the traveler and the destination.

A symbol of peace in the wake of the atomic bomb. Built thousands of years ago and just following the last world war. The shrine of wonders. Eight strands of hair from the enlightened head. When the casket is opened, the blind can see, the deaf can hear, the dumb can speak, the earth shakes and gemstones rain down from the sky. The pagoda in the city center and the pagoda on the lonely hill. Both require a pilgrimage. At the cusp of spring, in the heart of the rainy season. The old queen gazes upon the stupa from her deathbed. In the shade of the pagoda, the heart and mind are rested. Each breath is a glass of cool water. It is natural to bow down and pay homage. 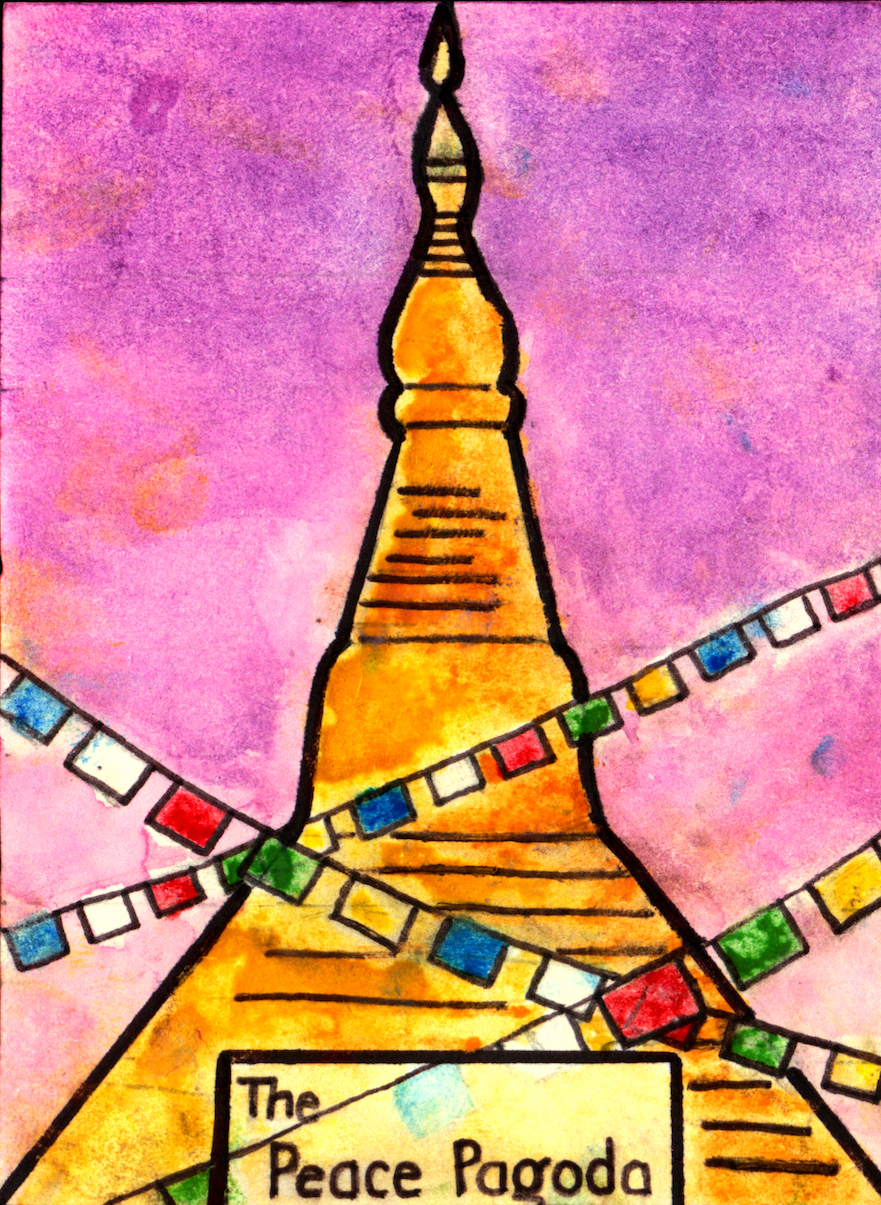 The Gemini energy of the two lakes, Saint Joseph and Saint Mary. Unconsummated marriage, immaculate reproduction. To walk the lakes in a figure eight is to knot two fates together. The blue of the lakes a mirror for the blue of the sky. A resting place for the eyes. A footpath in the woods leads to the last station of the cross. Beyond it, a twin Jesus crucified in a small graveyard. The lake and the graveyard adjacent, the life giving waters and the dead consuming earth. Past the gated boathouse, the old parish, across the street, the seminary, the basketball courts. Where the two lakes almost touch, lovers make promises and the celibate take vows.

Thirii Myo Kyaw Myint was born in Yangon, Myanmar, and grew up in Bangkok, Thailand, and San José, California. She is the author of the lyric novel The End of Peril, the End of Enmity, the End of Strife, a Haven (Noemi Press, 2018) and the family history project Zat Lun, which won the 2018 Graywolf Press Nonfiction Prize. She is the recipient of a Fulbright grant to Spain, residencies at Hedgebrook and Millay Colony, and fellowships from Tin House and Summer Literary Seminars. She holds a BA in literary arts from Brown University and an MFA in prose from the University of Notre Dame. She received her PhD in creative writing at the University of Denver, where she was the associate editor of the Denver Quarterly, and an instructor at Lighthouse Writer’s Workshop.