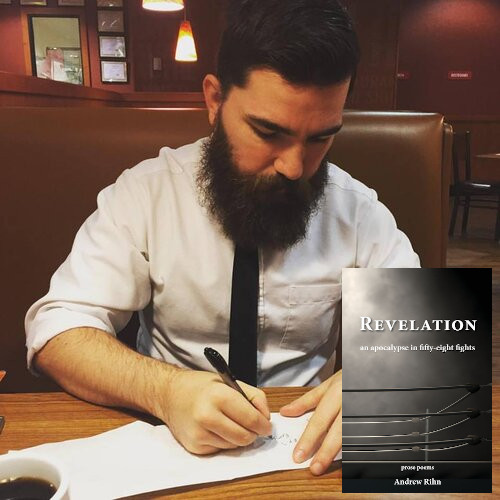 My book Revelation: An Apocalypse in Fifty-Eight Fights has the honor of being the first book released through Press 53’s new Immersion Poetry Series. The series aims to highlight writing that immerses its readers in the unfamiliar, providing entrance to subcultures, niches, and other unconventional spaces. The series editor, Christopher Forrest, likens the Series to a curiosity shop—you don’t know what you’ll expect to find next, but you can expect that it will be interesting, unusual, curious.

On its surface, my book is about the professional fights of Mike Tyson. That is the world it is immersed in—those boxing rings that Mike Tyson dominated in the twenty years between 1985 and 2005. Like any book of poetry, there are of course layers. An epigraph from Salman Rushdie’s novel The Satanic Verses establishes a theme of “newness” entering the world. An extended analogy connects Mike Tyson to the Old Testament prophet Elijah. Mr. Dream, the boss character who replaced Mike Tyson after his removal from the video game Punch-Out!!, haunts several poems.

So yes, Revelation: An Apocalypse in Fifty-Eight Fights is “about” many things: I would say that at its core, it is a book about how we deal with obstacles—physical and spiritual—how we transform those obstacles and how they transform us. That said, it is also without a doubt a book about boxing. The sweet science of bruising. Pugilism. The hurt business. Every one of Revelation‘s fifty-eight poems, each exactly 100 words long, corresponds to one of Mike Tyson’s fights; they are immersed within the squared circle, circumscribed by its ropes.

So please, dig in, have a listen, and immerse yourself in the music.

All they see is black venom
then my silhouette

I’m opening with this track for six simple reasons. 1) It’s a banger but 2) it’s not terribly well-known, 3) it’s referenced in my book because 4) Tyson used it as walk-out music to his 1996 fight against Bruce Seldon, and given that 5) Tupac recorded the song just for that fight, which he also attended, 6) it may be the last song Tupac ever performed, as he was shot later that night after the Tyson fight (which makes his reference to partying after the fight all the more impactful).

on the corner, slash my heart for fun
I’m not alive for anyone
I think you realize what I’ve done

This song isn’t explicitly referenced in Revelation, but the way that bodies knocked unconscious by Tyson’s devastating combinations drop to the canvas brought to mind the aesthetics of the Misfits, and so one poem does reference the musical genres deathrock and horrorpunk, as well the album title Legacy of Brutality.

those that know are real quiet
When you think you wanna try it, fuck around and start a riot

Another Tyson walk out song, used for his 1999 fight against Francois Botha. Also, nomination for best album title of all time: It’s Dark and Hell Is Hot (I reference this title in one poem).

Given my age at the time, I was begging my parents to spend their hard-earned money on Nintendo games, not pay-per-view heavyweight title fights. And I doubt I’m alone in having encountered first Mike Tyson through his presence in the video game Punch-Out!!.

Released just a few months before Tyson’s first defeat, this track captures something of the zeitgeist: the repackaging of hip-hop as palatable to white suburban youth, the branding of Tyson as unbeatable, and Will Smith taking second billing to Jazzy Jeff.

Bright lights is enticin’, but look what it did to Tyson
All that money in one night, thirty mil’ for one fight
But soon as all the money blows, all the pigeons take flight

Jay-Z featuring Justin Timberlake, sampling Kurt Cobain, and referencing Mike Tyson? Yeah, I’m in. And while it is difficult to find reliable and verifiable numbers for Mike Tyson’s fight purses, I’ve seen the number $30 million attached to his second fight with Evander Holyfield in 1997 (the so-called “bite fight”) quite a few times. Also, the line about pigeons is accurate: Mike Tyson is a life-long lover of pigeons.

This song centers on Tyson’s first loss, the upset of the century. Douglas was a 42:1 underdog when he faced Tyson in Tokyo on February 11, 1990.

This track opens on a famous sample of Mike Tyson. After his win over Lou Savarese in a blinding 38 seconds, Tyson spoke to the sportscaster Jim Gray, comparing himself to Alexander the Great before threatening to eat Lennox Lewis’s children. Lewis did not, at the time, have any children.

I give a fuck if that crown heavy, put it on my head

This song relies heavily on the Phil Collins track “In the Air Tonight,” the same song that Mike Tyson sings along with in The Hangover, the unexpected pop culture moment that went a long way to rehabilitating Tyson’s public image. Meek’s track was used by heavyweight champion Deontay Wilder for his 2019 walkout against Dominic Brezeale. I like to imagine that Wilder, a knockout artist himself, may have used it at least partially in tribute to Iron Mike.

Halo, I’m complete
Halo with me underneath
Halo, I’m reborn

I don’t listen to music when I write (I find it distracting), but I often play music when revising and editing. I was listening to a lot of Audioslave following Chris Cornell’s 2017 death by suicide, and most of the edits to Revelation were done to the sounds of Tom Morello’s unearthly howling guitar riffs and Cornell’s growling apocalyptic vocals.

I’m not sure if this can be correctly counted as a “song,” but Tyson’s walkout music against Michael Spinks in 1988 was the stuff of nightmares. Tyson would come out wearing only black shoes and black trunk—no socks, no robes—pure gladiator.

The image of Mike Tyson as “the baddest man on the planet” is perhaps what he will be most remembered for in the collective memory of the sporting public, but it isn’t where Revelation: An Apocalypse in Fifty-Eight Fights leaves him.

It’s a book about a prophet who, unsatisfied with the ground he walks upon, climbs a mountain looking for God. And there, in the face of divine revelation, he remains unsatisfied. It’s a book about climbing back down, about watching the mountaintop crumble behind him, about moving on.

It’s a book that views “newness” as something more than a one-time affair. Transformation as a dynamic, poetic process.

If Revelation is “about” anything, it’s that the “dark night of the soul” can lead to newness and transformation, the kind of stories we need now more than ever.

Andrew Rihn is the author of numerous scholarly articles and chapbooks of poetry, including Revelation: An Apocalypse in Fifty-Eight Fights (Press 53, 2020), Song of the Rescue (EMP Books, 2019), and America Plops and Fizzes (sunnyoutside press, 2010). He writes a boxing column, “The Pugilist,” for Into the Void magazine. He was born in Canton, Ohio, where he still lives.