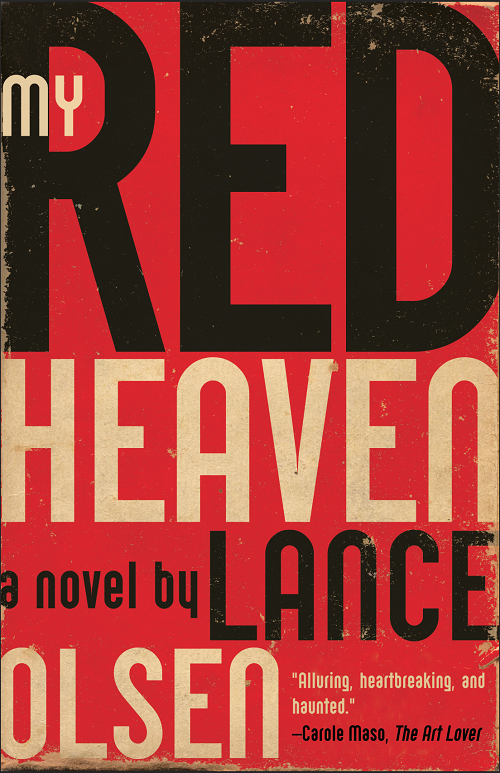 Set on a single day in 1927, My Red Heaven imagines a host of characters—some historic, some invented—crossing paths on the streets of Berlin. The subjects include Robert Musil, Otto Dix, Werner Heisenberg, Anita Berber, Vladimir Nabokov, Käthe Kollwitz, Ludwig Mies van der Rohe, and Rosa Luxemburg—as well as others history has forgotten: a sommelier, a murderer, a prostitute, a pickpocket, and several ghosts. Drawing inspiration from Otto Freundlich’s painting by the same name, My Red Heaven explores a complex moment in history: the rise of deadly populism at a time when everything seemed possible and the future unimaginable.

You raise your head from your tidy work desk in your nearly empty studio and spot a taxi two floors below rumpling over the cobblestones on Weissenburgerstraße.

The profile of the passenger balloons up succinctly — jowly, fleshy nosed, protruding lower lip — perhaps smoking a cigar stub, perhaps picking at his thumb nail — and the taxi enters a flickering perplexity of sun and shaggy branches and the passenger elapses and then the cinnabar-and-black car itself. There is the sharp amazement of it, the sense you might have passed that man on the street yesterday, pass him on the street tomorrow, yet would never know it, never have an inkling about what he does or why, and, that notion dissolving into the sun-and-shade dazzle quickly as the taxi itself, you lower your head and return to the limestone slab before you.

This afternoon you are making a lithograph of a mother and child.

In the far corner one of Beethoven’s piano sonatas plays on your gramophone, birthday present from Karl.

Your subject — late twenties, hair pulled back into an already-graying bun, purple veins cobwebbing her cheeks and forehead — stepped out of the main gates of the Schultheiss-Patzenhofer Brewery two blocks over. It was the end of the day shift. You often stroll by about that time searching for all the ways grace can reveal itself. Most of the men and many of the women in your tenement, in many of the tenements that make up Prenzlauer Berg, work in that brick building the color of stoneground mustard. Mid-summer, when the breezes stop, the factory’s hot yeasty fumes accumulate in the streets, cling to everything — bedding, towels, clothes, furniture, hair.

You often recognize your neighbors among those coming through the gates, people you nod to every day in the stairwell that smells like the inside of a cardboard box, queue with for the toilet on the dark landing, the locals with whom you chat in the waiting room of Karl’s medical practice around the corner.

This woman’s face caught you because of the stubbornness and tenderness and fatigue in it. You approached her, asked if she might be interested in posing. Just fifteen or twenty minutes, you promised. Just a few drawings.

Rather than slowing down, over her shoulder she asked how much.

Last Sunday afternoon you met her in the small park across the street. You didn’t expect her to turn up with her three-year-old son, chubby cheeked, mussed hair, wearing miniature overalls. You told her your name was Käthe. She told you hers was Helga.

Helga took a seat, her boy leaning into her. You carried most of the conversation, squatting before her, trying to get her to relax. Her boy loosened into sleep while Helga replied in monosyllables. She seemed both defiant and suspicious of you and your peculiar undertaking. Why would someone fritter away her time like this when there was so much honest work to be done?

You made several hasty sketches in your pad and thanked her.

The second your money touched her palm, you could make out some part of her click off and begin gaining distance from you even before her body moved.

Draping her groggy son over her shoulder like a lazy cat, she turned and left without saying goodbye.

Somehow you always find yourself making lithographs of mothers and children. You keep circling around the theme, returning to it as though someday you could get it right if you just kept at it long enough.

Over the years you have learned you work the way a cow grazes.

Rush, and all you do is make mistakes faster.

The stickiness of your grease crayon, tang of your black ink, smooth movements of your hand: that’s it; that’s all; that has to be enough.

Once you had the audacity to believe you were some kind of revolutionary. In your childhood dreams, you died a hero on barricades. Perhaps you believed too long that humans were heading somewhere. But when your son. When Peter. When only three months after the war had. That’s when old age commenced flourishing inside you. The news from Flanders crashing in. You were forty-six. No. Forty-seven. You finally recognized all armies were simply postponing the end of the world from one day to the next. Every war carried within itself the war that would become its answer.

Karl Kollwitz was a teenage medical student when you met him. He wore his dark Van Dyke and silver pince-nez with elegance, was a committed socialist, a member in good standing with the S.P.D. You were Käthe Schmidt, a person you have come to consider a sister from whom you have slowly drifted apart over the decades. It proved easy to admire Karl, and next adore him. He proposed and you said yes and he asked what he could give you, how he could help your art. You started to love him when you moved to Prenzlauer Berg and he decided to dedicate his practice to the needy. You did, too, in a way, documenting those who lived around you. Karl built a studio for you, the one you are sitting in. He hired Sonya, your live-in housekeeper. You loved him even more when you found yourself pregnant with Hans, and four years later Peter, and instead of your production slowing down as you eased out of your twenties with two boys and a husband in tow, it sped up. But when something. When Peter. When it storms back at you, you feel all your strength scraped out. It was the news from Flanders. It was the hours. It was —

You can make another lithograph of a mother and child, a thousand of them, yet you will never get any closer to your dead son, your progressively distant husband, those absurd barricades, your youth. Art doesn’t help. That’s the hardest lesson you’ve had to learn. People say it does. People insist art makes things better. You prove them wrong every day. Art doesn’t make life more bearable or longer or impervious to anguish. Its real goal is the opposite: to teach you nobody can be saved in the end.

Excerpt from My Red Heaven

Lance Olsen is author of more than 25 books of and about innovative writing, including, most recently, the novel My Red Heaven. His short stories, essays, and reviews have appeared in hundreds of journals and anthologies, such as Conjunctions, Black Warrior Review, Fiction International, BOMB, McSweeney’s, and Best American Non-Required Reading. A Guggenheim, Berlin Prize, D.A.A.D. Artist-in-Berlin Residency, N.E.A. Fellowship, and Pushcart Prize recipient, as well as a Fulbright Scholar, he teaches experimental narrative theory and practice at the University of Utah, where he directs the creative writing program.