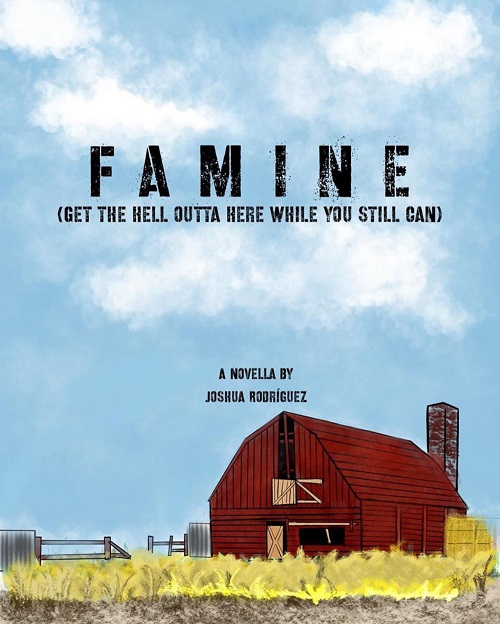 In Famine (Get the hell outta here while you still can) by Joshua Rodriguez, the narrator begins at what must be his lowest point, alcoholic and estranged from his wife and children, but then his brother comes to him with the news that their father had died. They set off together and while the narrator drives and his brother drinks, they get angry at where they are and who they became. In a way, this novella is a booze-fueled march through a graveyard to find the American Dream’s headstone. The narrator looks at the factories falling in on themselves and sees “rust addled pipes and shattered windows. Slumped over chain link fences circumscribing what was once a source of meaning and happiness for a people forgotten. Industry whisked away.” The narrator sees himself as one of the many who was left to die when the once mighty fortresses of the factories fell.

Rodriguez approaches narrative unconventionally for this story. Rather than showing the actions, such as driving drunk on backroads, he begins the chapters the morning after when the narrator and his brother wake up with a hangover and fill the reader in on the night before through dialogue. Naturally, this means the novella isn’t action packed but rather focuses on reflection. The narrator spends his time driving thinking about what drove his father to abuse, but he’s not trying to absolve his father. All he wants to say is “I get it. I guess.”

The novella is written on the line between poetry and prose, opting for short, choppy sentence fragments stringing together long extended metaphors that bring the reader from hangovers to the death of factories to the loneliness that lurks in empty beer bottles. The beauty of his language draws us in so that he can earn these twisting rants about the failure of America in handling disenfranchised workers:

Sometimes all people can pass down is pain. It’s what happens when the world despoils you of anything of value. When the factories shut down and jobs go extinct and no one gives a flying fuck. The world keeps spinning on its nauseating axis. And you’re left in its wake. Like road kill. When you have mouths to feed and no means to do so. When this insatiable wanting hijacks your sensibilities. When everything manufactured is devoid of any real meaning. When authenticity and hope and heart are annexed somewhere out of reach. And everything starts feeling like static. Flat and vapid and insubstantial.

When everything manufactured is designed to be discarded and replaced in shorter and shorter interims. When heirlooms become obsolete. When the only heirloom a person has to bequeath is a collocation of cultural traumas. Abandonment. Abasement. And that’s all we ever got from dad I suppose. A whole lot of trauma and hurt. And not much else. But it ain’t like he had much else to offer.

Some readers may find these sections to be preachy. If one approaches with an open mind, then these rants open a door into the characters and story that makes it feel whole and gives reason to the chaos. Without them, it’s a story of beautiful metaphors to tell the tale of two brothers burying their father, but Rodriguez uses these rants to explode the piece into an exploration of those left behind by the system and how the abandonment tears away what made those workers people and what it leaves behind. Husks of factories and husks of humans:

The sky is steely grey. The pallor of someone dead or dying. Color decanted. Syphoned. Like heaven was bleeding out. I see Ken stumble out of the bus. I recognize him immediately among the crowd of cross-country marauders who spill out. They look disoriented. Like they’d just been wrung out of the womb. Bleary eyed and astonished. But Ken is easy to spot. He still exudes the same thing he did as a kid. The watermark of our family. Our inveterate blight. What dad passed down to us. Maladjustment.

He’s bloated with pallid skin. Hollows rest beneath blood-shot his eyes. Dark and prominent. Like two black holes. He looks like he’s been crying. But it’s best to not inquire at this juncture. He’s practically a stranger. Maybe he’s broken up about dad. But I doubt it.

This is not a long book. At 118 pages, it can be knocked out in an afternoon, which may be the best way to read it. The narrator wanders down childhood memories with an adult’s insight into not just what happened but why it happened, and through this insight, he tries to better understand his father. All the while, he screams to the reader, filling us with his own bitterness and his own aloneness. This is a scream that demands to be heard, so let yourself hear it and read Famine.

Joaquin Macias was born in Sumter, South Carolina, to a surrealist and a communist. He is an aspiring writer and student of English and Theater at Winthrop University. His work has previously appeared in Crack the Spine and Riggwelter.