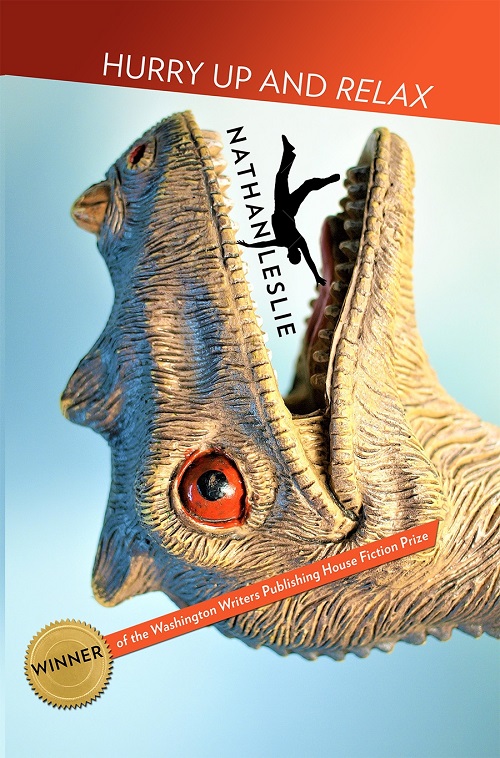 I’m a big fan of Nathan Leslie’s short story collections. Over the years, he’s published nine, as well as a novella collection, an excellent novel, and a poetry collection. His stories are often funny, often poignant, and always try to get at an understanding of how to live in this sometimes unsatisfying but usually surprising world.

Leslie’s Washington Writers’ Publishing House Fiction Prize winning newest collection opens with a humorous story about a writer catching someone on the Metro reading—and apparently not impressed by—one of his stories. It’s a funny premise, but Leslie enriches it by playing with the main character’s relationship with his in-process-of-being-gentrified neighborhood, which ties in to his view of his own identity. Is this who I am? A failed writer in a hipster neighborhood? he ponders. Leslie further ups the ante by delivering the story in second person, which gives it a meta tone. Leslie undercuts any potential pretentiousness with humor; he centers himself, “the writer,” only to laugh at himself and shift the focus to the idea of human connection, instead.

Those ideas—not only human connection, but the questions of Who am I? and What am I doing with my life? are at the heart of this collection. The collection kicks in, in earnest, with the second story, “Courting the Un-Bob,” which is about a man whose life is full of Bobs. What better metaphor for a midlife crisis could there be than a man whose life is full of Bobs? They’re all individuals, sure, but they all seem to be the same. His saving grace is that he’s not a Bob. He’s a Frank. He considers himself better than the common Bobs, and that’s pretty much his identity. It’s a telling commentary on middle class identity and American exceptionalism. Who’s to say all the Bobs don’t think the same way about him? And, ultimately, there’s very little difference between him and the Bobs.

The title story is about Paulie, a man who works too hard. He decides to take a staycation and take advantage of the time to catch up with some things he’s meant to do around the house. To do this, he takes out an ad for a handyman. The person he hires, of course, turns out to have lied about his ability. More than that, he seems to be completely incompetent. He doesn’t have tools. He doesn’t know how to do anything. Paulie has it in his mind how things should go, so he digs in and tries to force that to happen. The thing about Paulie is, since he works all the time, he doesn’t really know what to do with himself when he’s not working. These projects aren’t particularly interesting to him—he’s fixing up a house he mostly just sleeps at. But connecting with this incompetent handyman is much more engaging to him. They become friends. In less skilled hands, a story like this would be a farce, the author simply pointing and laughing at these damaged people, but Leslie crafts his characters with empathy.

Many of these stories include an absurd element, which doesn’t make them at all unbelievable. Have you looked around, lately? “It Can’t Hurt, Can it?” follows a character who practices “remote Reiki,” which is “a cutting edge slash alternative form of Reiki.” She clings to this technique, even though everything else in her life is falling apart. When her husband balks, she dives into this practice, at the expense of her former life. This alternative Reiki is the thing that defines her, much as the idea of being a writer defined the character in the first story, or NOT being Bob defines our narrator of that story. Characters in these stories cling to all sorts of things to set them apart from the common schlock. Some live alternative lifestyles. Some follow unorthodox religious beliefs. They’re looking for something they haven’t found through the “normal” experiences, something that will give them a peace of mind they chase but can’t find. Ultimately, many of these characters seem profoundly lonely. They’re searching for that connection. And isn’t that all any of us truly want? To be valued? For someone to see us in the crowd and think this one is special?

What appeals to me about Leslie’s writing is the fact that he keeps writing short stories. It’s like no one told him that most people want novels or nonfiction, but he keeps plugging away at it. And he keeps publishing collections—that’s a feat, in itself. And I’m glad, because I really like his stories. I think of short stories like little songs. Sure, we all want a solid album, but it’s that one song we’re going to listen to over and over again, because the band just lets loose on it, or it’s so profoundly emotional, or whatever. Leslie’s stories are like a bunch of 45’s. Each one offers an opportunity for a totally different vignette, and Leslie is a skilled performer on the page.

CL Bledsoe is the author of seventeen books, most recently the poetry collection King of Loneliness and the novel The Funny Thing About… He lives in northern Virginia with his daughter and blogs at medium.com/@howtoeven (with Michael Gushue).