Lunch Quest by Chris Kuzma is a frolicking epic in graphic novel form, one that doesn’t take itself too seriously to have a ton of witty fun.

The adventure begins with a blue bunny rabbit in a tailored suit: 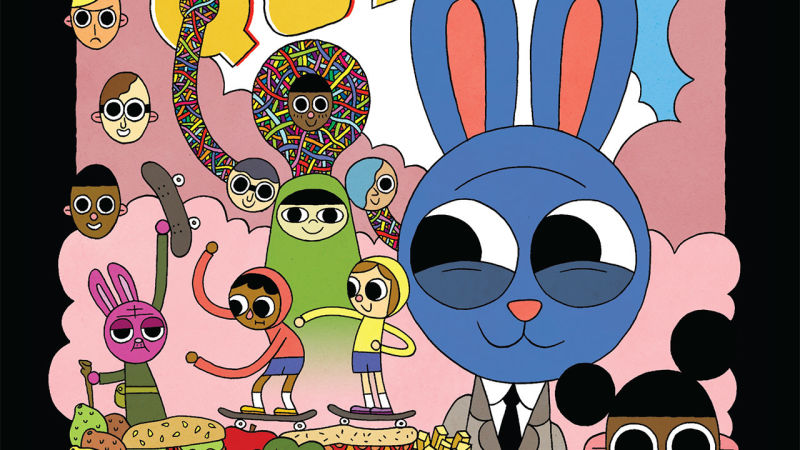 Already we have a protagonist that challenges the reader’s mindset going in, while also establishing a clear tone for the novel. The rabbit is on the prowl for his lunch, as the title expertly suggests, and a trip ensues that will surely tempt the reader into questioning if they haven’t taken a “trip” themselves.

The first thing about this book that captures my attention is the eye-popping visuals. The art here is top-notch and looks like it comes straight from an animated TV show. There’s a certain whimsy in this art style that Kuzma really plays with well, every piece of the scene popping off the page: 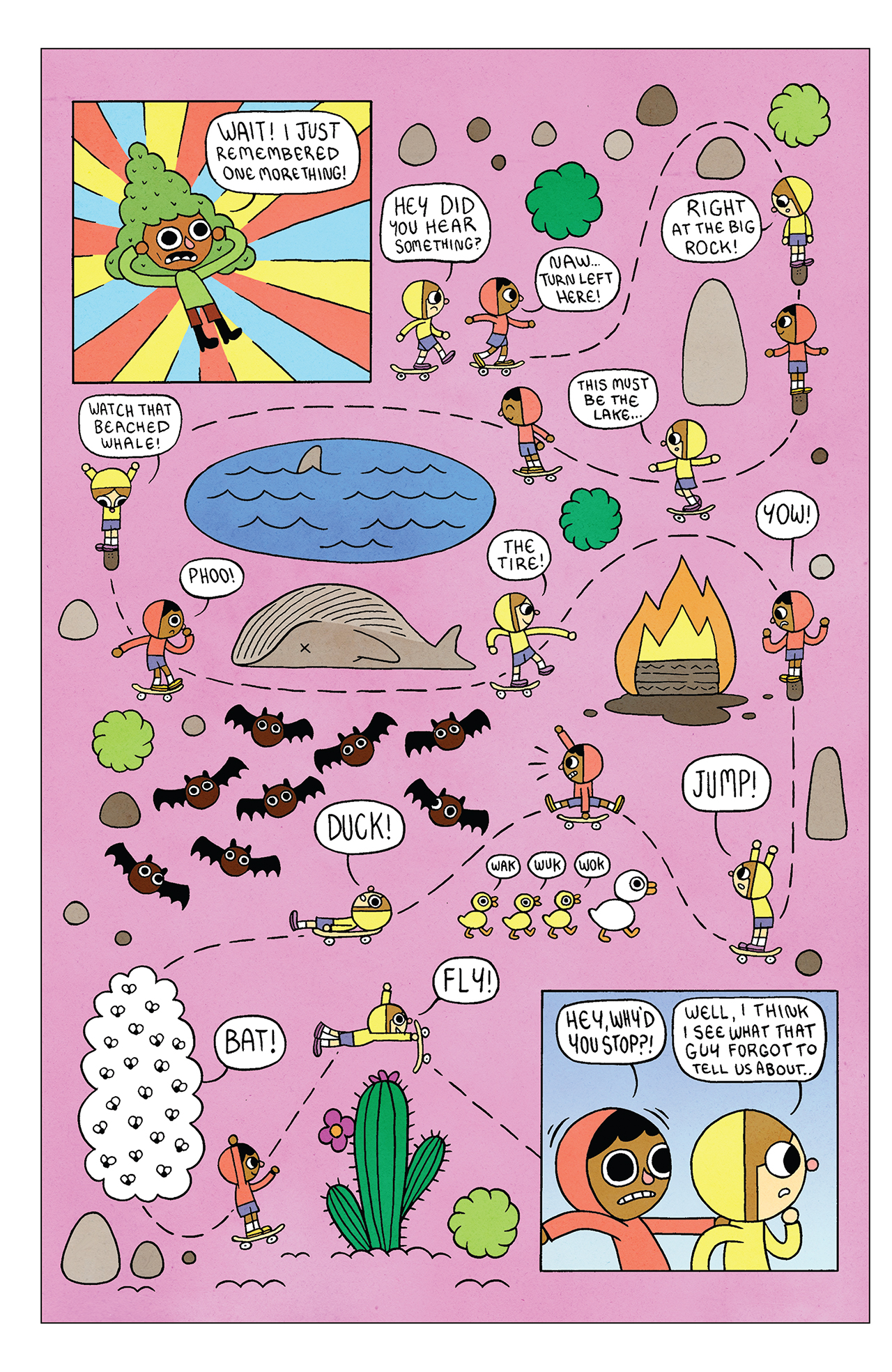 As far as the story goes, Lunch Quest is one that prefers to take readers on a journey of fun as opposed to gripping them in a Game of Thrones style storyline (I promise I don’t watch). The aforementioned tone of the graphic tale is comical and very lighthearted with plenty of epic skateboarding shots and even wilder dance offs: 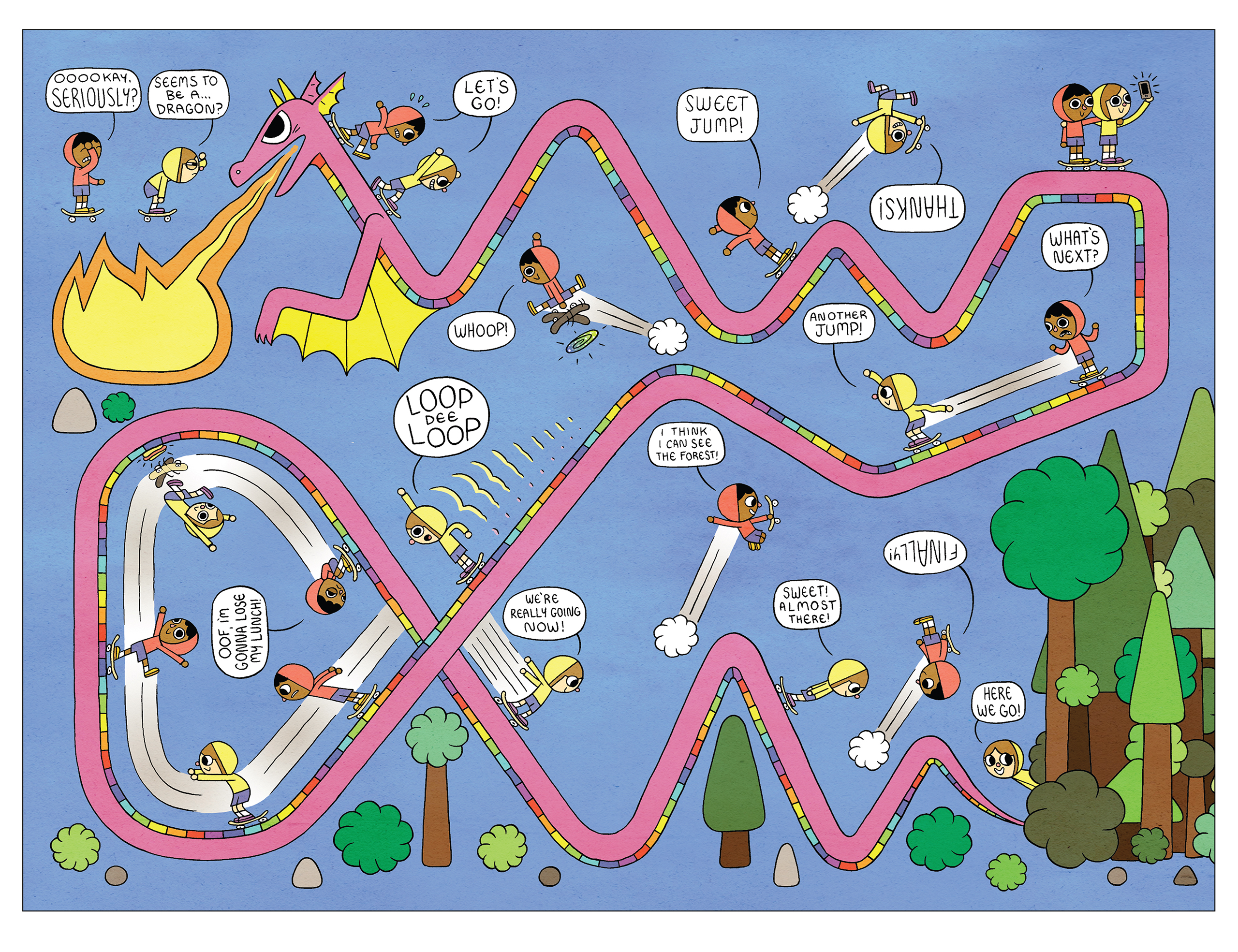 That part of the quest in particular was a standout for me as I read through it for the first time. In those scenes, Kuzma did a great job at establishing a rivalry while also maintaining the tone.

The transitions between the bunny rabbit’s perspective to the skateboarders and so on, were also great. Kuzma handles them like a pro. The first time the rabbit looks in a lettuce cubby he notices a small pocket world that is inhabited by two skateboard prodigies. The reader is then transported to a magical ride of shredded pipes and awesome tricks and flips. 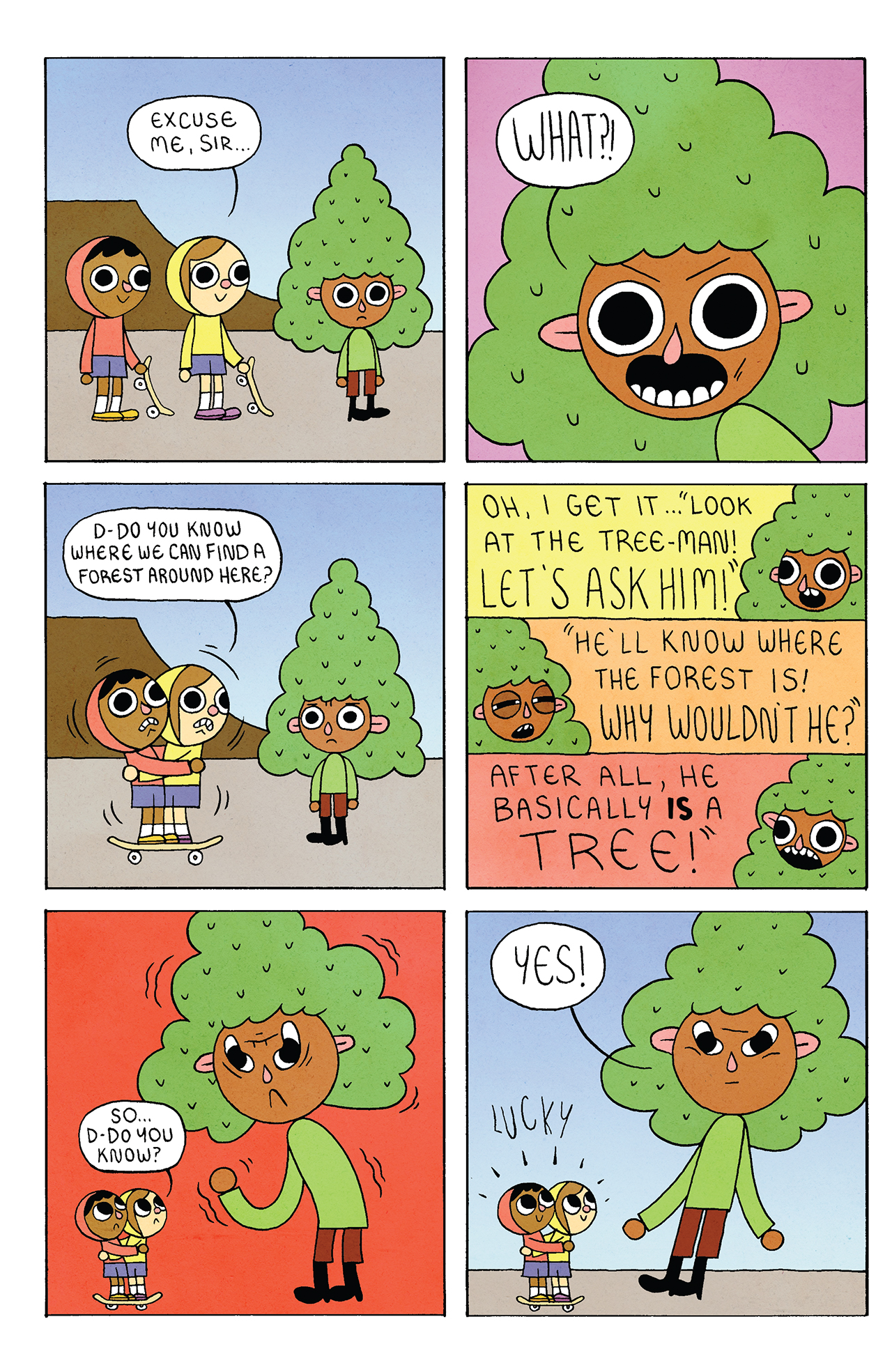 There is then a transition back to the rabbit where a friend appears and offers to help out in the rabbit’s quest. The piano is at the center of the next transition and that is where the reader meets the dancers. These adventures lead up to the rabbit eventually finding lettuce, a long-awaited friend returned.

Lunch Quest offers a large scale for only eighty pages and Kuzma uses the small space well in telling a story that is happy and fun for all types of readers to enjoy and share. A message from the novel that I take away from it is not to be so obsessed with one aspect of our lives so much that we miss so many other parts. This rabbit is hellbent on finding lettuce and along the way he (assuming) learns what skateboarding on the moon looks like, and how synchronized dance really is. The rabbit learns the secrets of the tiny crawl space, and all of these adventures seem to expand his world and the lunch quest seems a little more relative than it did at the start of the novel.

Eventually, the rabbit finds lettuce and it turns out to be, as I said already, a friend. In a twist they are preparing to go eat out somewhere until the rabbit asks where his wallet went. Leaving the novel on a comedic cliffhanger fits well with the tone of the narrative and also gives the reader an extra laugh at the end.

Overall, Lunch Quest provides an avenue of comedic fun and whimsy through the eyes of a blue bunny rabbit on the search for lettuce. Kuzma uses a defined art style to create clear and scenic imagery that leaps off the page and into the minds of readers everywhere. It’s a lighthearted affair and at eighty pages, should be an easy breezy read for all readers.

Trey Brown is a senior at Wright State University majoring in English with a concentration in creative writing. Whether writing fiction, drawing comic books with friends, or crafting movie “reviews” for The Guardian (WSU edition), writing has always been a calming way of expression for him. In his spare time, he plays basketball (go Bulls) and listens to music (indie/r&b).