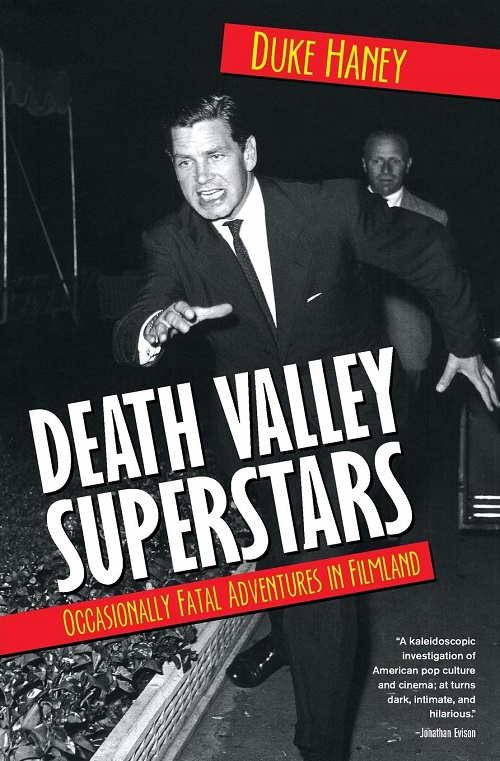 For people … like myself … that take morbid delight in the machinery of Hollywood and its end product … movies – then this book is pure candy – a riotous … and virtuous sugar-hit … a thrill ride … of investigative essays somewhat in the vein of Kenneth Anger … or the more Tinsel Town-centric pieces from Joan Didion – although to align this book with those writers … would be to do Duke Haney a disservice.

In this septic age of alternative facts … hot takes and Twitter shitstorms … Duke Haney talks like a Shamus … researches like a Gumshoe … and comes up with a rollicking journey through the cool frailty of the Californian entertainment industry … albeit with side excursions to Haney’s time in Manhattan.

There are some actors and topics here that … in 2019 … we probably never need to have another word written about again (Marilyn Monroe … Elizabeth Taylor … Hugh Heffner … Jim Morrison) … or so I thought … until Duke Haney puts his personal and thoughtful take on them. For instance … there is an essay on Elizabeth Taylor … but from the perspective of Duke Haney … as a child … seeking to get her autograph when she comes to Haney’s hometown. There is a moment when Haney and Taylor’s eyes meet … and what is enthralling about this article is the subsequent reflection from Haney … decades later … on what this all meant … what he … as someone who once aspired to be an actor … could make of all this.

Part of this book deals with Haney’s contemplations of a childhood spent amongst movies. The complexity … as Haney discusses … of him not liking modern Hollywood fare … but liking more vintage Hollywood lore … the complexity … as Haney sees it … is that he now is … as an adult … a dinosaur. If Iron Man is rightly called shit … and if Haney doesn’t watch ‘baby movies’ … what exactly is he? This is the existential crisis he might be in. In this dog-eared and dirt-clothed Earth … what are celluloid dreams anymore? The trick that Haney attempts … is to juxtapose those ancient Hollywood worlds with modern technology internet meme-worlds. There is no message anymore … no standard book of aesthetics … just the same medium. Are we lost within it … just floating … bubbling along?

Some of the blither essays detail Haney waking up in Jim Morrison’s motel room after a seance covered in his own piss … as well as Haney and his cohorts rolling around South-Central Los Angeles looking for Sly Stone’s RV. However … the adventure isn’t just the action … the action … the wisdom after the adventure … is what Haney discovers. If the hollowness of Los Angeles is dreadful … then Haney needs to get out amongst it and reflect and discover. The intention (finding a suitable psychic who talks to the dead … tracking down Stone’s whereabouts) is the starting point … the end point delivers the reader to the wisdom that Haney discovers.

There is an essay … perhaps one of the most poignant things I have recently read … that essentially details Haney just walking around Westlake … downtown Los Angeles … near the Alvarado Court Apartments where the film director and former actor William Desmond Taylor was murdered. What follows is Haney’s reverie on the real-life situation that plays out before him. But Haney … always has one eye on the past … the Hollywood past … he is a casual tour guide walking with no one … the people he guides are the readers. He is a wayward oracle who attracts incidents (in this case someone who seems to have escaped from the local psyche ward … and the subsequent cop-action that occurs) so that he can reflect on all manner of filmlike things.

Every topic in this book revolves around cinema. Every topic … and this is the beauty of the book … doesn’t seem to have anything to do with cinema. Lee Harvey Oswald for instance. But scratch the surface … and Haney doesn’t have to scratch too hard … and there are numerous links and intrigues to Oswald and his relationship to cinema: the Zapruder film … the films that Oswald watched while he was living in the Soviet Union … the films that Oswald was watching in the movie house prior to the post-assassination shootout and his subsequent arrest. Haney believes that every subject has clues and patterns that can be traced back to cinema.

The book is brilliantly sequenced. For every tale … such as the ones in the previous paragraph … there’s some heavy longform work that is in-depth and investigative … that is drenched with facts … recollections and heartache. There’s a centrepiece essay on the desolate and irrational life of Mark Frechette … there’s the understanding that Haney finds from investigating his subjects … for instance … Haney mentions that he wanted to write a book on the actor Steve Cochran … but wanted to call it Steve Cochran: Bad Motherfucker. Haney … upon viewing Cochran’s FBI file … realises that Cochran might have just been a massive asshole.

Anyway … this book is a cracker. There’s a lot here that I’ve subsequently thought about since turning the last page. There’s a lot to contemplate. On a base level … one could judge a book on how quick the reader turns the page. This was a real page-turner. People who write reviews should probably offer more. People who read reviews … perhaps … would like more. But let’s strip this back to brass-tacks … I really enjoyed this book. I couldn’t wait to get back to it when I was away doing mundane things – like life.

If you’ve ever wanted to hear scalpel slices of backlot dreams … perhaps nightmares … or Gnosis remarks that refer to Las Vegas and Hollywood … then Duke Haney … with sly wit burning … with unknown and known old-school celebrities … certainly delivers.

Read it before you become your own pentobarbital casualty …