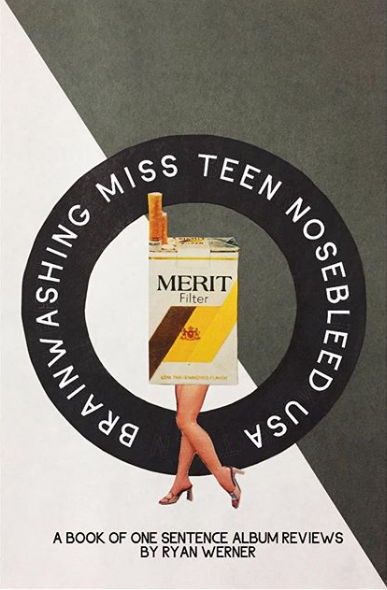 I was introduced to Ryan Werner’s work when I read and reviewed his novella Soft (Passenger Side Books, 2015) a few years ago. The novella is composed of two hundred fifty-eight micro-chapters, some as short as one sentence, so it made sense that for his new book, Brainwashing Miss Teen Nosebleed USA, Werner decided to write an album of one-sentence album reviews. Even in Soft’s longer chapters and Werner’s other writing, it’s often in that one last sentence that he completely wins you over, ending his songs with a flawless final note. The short album reviews in Brainwashing Miss Teen Nosebleed USA are those pitch-perfect sentences over and over again.

Werner describes the project behind the book in the introduction. He was tracking every album he listened to and then started to review each album in one sentence. These are not, however, traditional reviews; Werner started “inventing situations where the music would fit or describing the sort of person who would listen to that album or building up an equivalent sound from non-music.” He also describes the reviews like this:

I work at a preschool and had a little girl ask me what “orange” is once. She said she didn’t know what a carrot or a tabby cat or an orange was, so I had to tell her something else, something like, “It’s what you see when the sun is so bright that you have to look at it with your eyes closed.” That’s the kind of sense I wanted to make with these little reviews.

The form of the book could have worked to its disadvantage, as even Werner acknowledges the reviews “can be a bit draining and turn into static if consuming more than a couple dozen at a time, especially if you’re thinking too much about them”; however, Brainwashing Miss Teen Nosebleed USA simply requires a different reading experience. The author writes, “So, don’t read this book straight through and, for your own well-being and general enjoyment of this book and your life, don’t think too hard.” Readers should follow Werner’s recommendation, especially because the book can easily fit into a reading routine with another book, but don’t be surprised if you get lost in the music and read months of reviews in one sitting.

Werner’s taste in music is eclectic, and he listens to everything from local bands (one act is referred to as “local dicks”) to classic rock to contemporary indie rock to the ambient music of Japanese composer Hiroshi Yoshimura’s Music for Nine Postcards (1982). The reviews zigzag from one genre to the next, inevitably including both artists with which readers are familiar and those they are not. This is the fun of it. Werner reviews albums you’ve listened to on repeat and you just get it, or he reviews albums you’ve never heard and his language entertains you or inspires you to search for the album on Spotify.

The reviews are generally irreverent, incredibly esoteric, and written in the second person. There are even reviews that could be considered magical realism. Werner occasionally writes more “traditional” albums review, like this one for Jim O’Rourke’s The Visitor (2009): “I listened to this fucker like three times—really beautiful stuff that weaves in and out of American primitive and drone and soundscapes and twin leads and all sort of other passion genres for O’Rourke and, what do you know, me.” This is also one of several reviews in which Werner references himself, a mini-memoir. He also re-listens to albums and re-views them, and the different reviews he writes for the same album highlight the breadth of the reviews throughout the book. For example, here are a few of his reviews for Mitski’s Be the Cowboy (2018), which he listens to and reviews seven times:

You find a time capsule you buried when you were a kid but you just dig the hole even deeper and put it back in without opening it.

You keep your autobiography spread across the entire world in the form of length replies to Craigslist ads for pre-owned-but-unused wedding dresses.

The book itself does not have an arc, and the weeks could be read in any order, but some reviews reference other reviews from that week (Frank Zappa’s Hot Rats (1969) is described as “Your drug dealer’s favorite band’s favorite comparative literature professor” and then King Crimson’s Starless & Bible Black (1974) is “Your favorite comparative literature professor’s drug dealer’s favorite band”), and occasionally Werner listens to several albums by the same artist and writes a narrative through the reviews, like when the first eight ZZ Top albums are reviewed as a “great” barbecue with “the best BBQ you’ve ever had,” in fact.

Werner has written nonfiction about music before, and Brainwashing Miss Teen Nosebleed USA complements his book of music essays, Maybe Don’t Drown Everything You’ve Ever Wanted in a Mop Bucket That Isn’t Yours (Passenger Side Books, 2016). That book is both memoir and music criticism, as Werner uses the more traditional essay form to explore personal relationships and their connections with music, including several artists reviewed in his new book. For example, while Brainwashing Miss Teen Nosebleed USA reviews several Neko Case albums, one album Werner does not review, Middle Cyclone (2008), is featured prominently in his previous book in an essay that reflects on the author’s life at the time of its release.

Werner’s new book is the perfect confluence of fun and form. He jokes that the book “combines two of [his] favorite things to do: talk about music instead of listen to it and be completely exhausting when I try to be clever,” but Brainwashing Miss Teen Nosebleed USA couldn’t have succeeded through the power of music alone. It’s the precision of his language, demonstrated in his previous books and constrained to the form he chose for this project, that makes the book work. He whittles the overblown braininess of a full-length Pitchfork review into a single sentence that actually makes you feel something.

Zachary Kocanda holds an MA in creative writing from Ball State University. His reviews have been published in Heavy Feather Review and Mid-American Review. He lives in Illinois, where he works as an editor.