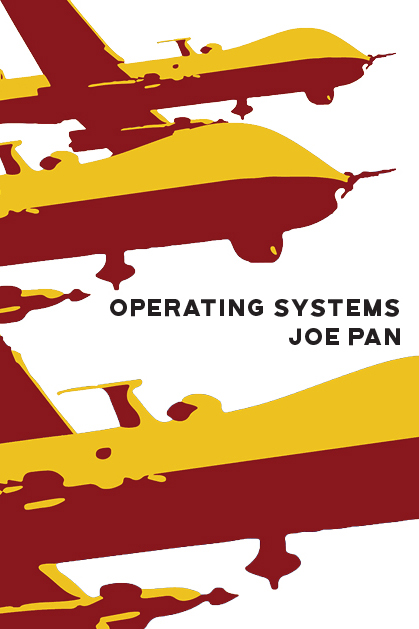 The title of the Joe Pan’s poetry collection, Operating Systems, refers to the operating systems underpinning society, from the interpersonal to the international, as well as the operating systems of poetry. The collection is divided into four sections of five to seven poems each, and a long prose poem that constitutes all of section five. Because the collection is so diverse and hard to pin down, this review focuses primarily on the long poem, “Ode to the MQ-9 Reaper,” and then briefly comments on several others. While Pan’s eerily beautiful presentation of ethical dilemmas in “Ode to the MQ-9 Reaper” is not necessarily stylistically representative of the collection, it exemplifies the thematic exploration of operating systems.

The MQ-9 Reaper is the US military drone in service today and the machine that replaced the famous Predator. The poem takes on many aspects of the drone; its history, its use in conflict, its disturbing capabilities. By personifying the Reaper, the poem holds the object to account for the decisions of its creators and controllers. We quickly see that the poem is not about the drone, really, but about us; the speaker observes, “Dear Reaper, I interrogate to better know aspects of myself, it seems.” We learn about ourselves by examining how we come to terms with a flying robot that kills in our names. By dividing “Ode to the MQ-9 Reaper” into fifteen parts, Pan executes this examination from different angles.

The poem begins in childhood fantasy with the line: “(I dreamt you up in the third grade.)” Like a true ode, the first stanza elevates the engineering marvel of the drone, emphasizing its radicalness (in the Ninja Turtle sense). With humor, the poem demonstrates that our awe at destructive engineering grows from childish roots, fertilized by juvenile inability to understand. Pan writes, “& my uncle’s waking battle dreams (of the Vietnam variety) that go unmentioned in advertisements peddling the mastery of thumb-numbing single-shooter POV games for Xbox & Playstation as a skillset” and “O to be gamers, with each ethereal tick a countdown aria to roadside decimation, or the anticipated signal of microwave pizza.” The irony that the drone is both like and unlike a video game complicates the adolescent mindset that the poem places at the Reaper’s origin.

The Reaper is not just James Bond style cool; efficacy is also an elevated property of the drone. Part IV begins, “The case made for your creation was utilitarian, with a catch. As an instrument sacrificing nothing of itself, you are a tool, Reaper—a dumb bucket of brimstone & nothing more.” This observation is closely followed with the question, “To deprive war of warfare’s casualties (on our side, of course) … [i]s reiterated as your goal, & yet civilian casualties excluded from military updates discount the lives of victims whose freedom we’re told is in part the reason why we fight, no?” The paradox lays bare a contradiction—should we preserve military casualties as a deterrent to war, or should we keep our servicemen and women, our friends and family, alive and safe? If we accept the drones as protection of US troops, how do we justify the drone’s civilian casualties abroad?

It’s uncomfortable to struggle with the poem’s ethical dilemmas. Pan reminds us we are complicit in the Reaper’s exploits without shying away from the barriers to avoiding culpability. In its entirety, Part XII reads, “To realize the air purifier I’ve recently purchased to cleanse my house of dust particles comes from the same company (Honeywell) that designed your turboprop engine: Factory 1: Remotely piloted hunter/killer weapon. Factory 2: Relief of asthmatics.” If the same corporations engineer the drones and household electronics, can we avoid subsidizing war? The poem does not answer because there is no satisfactory resolution and because it’s something each person must grapple with themselves.

Pan ends “Ode to the MQ-9 Reaper” with a call for obsolescence, both for the drone and for the poem: “If poetry is news that stays news, I would rather this poem follow you headlong into obscurity, where you as the transfixed object & my words as what-will-suffice greet each other at a point of detonation above a thin, horizontal path to yield culturally & historically all the raw accumulative power of a hiccup.” It’s an optimistic ending, perhaps too optimistic following how unresolved the poem leaves the dilemmas it poses, and sentimental opposition is not resistance. And yet, the poem needs resolution even if the problems that inhabit it cannot be resolved within its lines. Readers leave the poem tired, having wrestled with what the Reaper means in their own lives. The poem’s virtue is reflection and if resistance follows, it will feel deeply considered.

Other poems in Operating Systems also take readers to introspective places, like “Bedford Ave” that dissects a train striking someone and “Prisoner” which deals with addiction.  “Cheerios” depicts a social gathering. Someone responds to the speaker’s recollection of his mother’s suffering with the cliché, “Whatever doesn’t kill you—.” But the mother is dead, killed by overwork and social abandonment, and the speaker’s rage over her suffering spills onto the page:

Like “Ode to the MQ-9 Reaper,” “Cheerios” takes our culture to task for beliefs—operating systems—that lead to the victimization of vulnerable people. In this case, it’s the useless virtue we assign to needless suffering that allows that suffering to be accepted and perpetuated.

A review of Operating Systems would be remiss not to point out the collection’s inconsistency. For example, “Shadowman,” a poem about women from a man’s perspective, feels thin when read alongside “Cheerios,” which grapples with a similar subject much more powerfully. The diverse subject matters and stylistic approaches mean that reading Operating Systems is somewhat akin to listening to a band like, say, Ween, who range from country to metal to pop all on one album. You dig it overall and respect the diversity even if some moments don’t resonate as with you as strongly as others. Of course, the collection’s diversity is also a strength and most readers will find something to challenge or surprise them. Finally, it’s worth pointing out letterpress and block print design will look cool as hell on your bookshelf.

Eric Aldrich is a writer and an English professor at Pima Community College in Tucson, Arizona. He’s had short fiction in various publications, most recently the Manifest West anthology from Western Press Books and The Worcester Review, as well as work forthcoming in Weber: The Contemporary West.