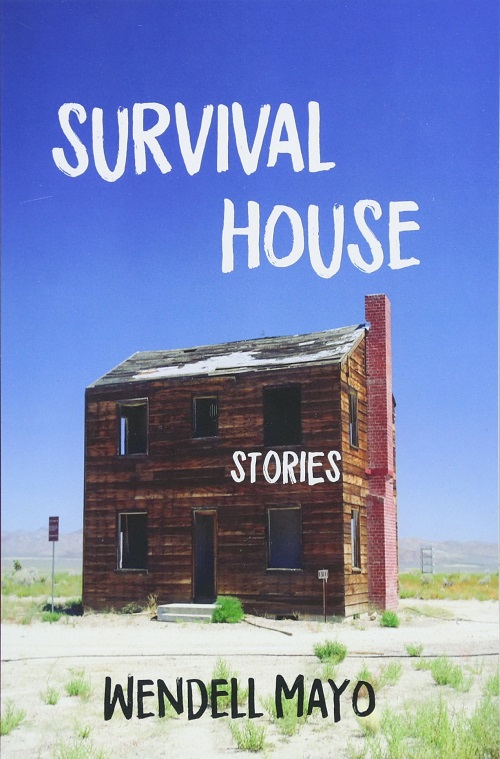 Survival House, a new collection of short fiction by Wendell Mayo, invites readers to experience the ironic fetishization of the Cold War in America. The collection blends compelling characters with borderline absurd imaginings of the Nuclear Age ethos. Mutually assured destruction hovers in the background as atomic diction is repurposed into dad jokes with a dark side. The dark humor that permeates many of the stories sometimes dissolves into laugh-out-loud slapstick; at other points, it fades until we are left to face what we’ve been laughing at, our own complicated relationships to the devices and policies that pose our greatest existential threat.

The characters in Survival House have learned to stop worrying and, if they don’t love the bomb, they appreciate the potential energy. In the opening story, “Doom Town,” the narrator, who is a newcomer to the recently unincorporated small town of Luckey, Ohio, finds himself responsible for Corporal Pig, the porcine leader of the Doom Town Parade. During the era of nuclear testing, pigs were nuked to show the destructive power of the bomb; after the parade, Corporal Pig’s charred remains feed all the revelers. The parade, a yearly event in which the townspeople dress up like nuclear notables including J. Robert Oppenheimer, Madame Curie, and Ethel Rosenberg, recalls Civil War reenactments and other themed, costumed municipal reincarnations of history. The absurdity, highlighted by the narrator’s reluctance to tend to Corporal Pig, is really funny. The story hits us with poignant moments, too, such as when Madame Curie scolds a man dressed as the Fat Man bomb (his attire noting the 21 kilotons) for reminding revelers of the destruction of Hiroshima and Nagasaki and bringing bad vibes to the parade.

In “The Trans-Siberian Railway Comes to Whitehouse,” a local bar, down on its luck, turns to a Bolshevik theme, adopts the name Trotsky’s, shuts off the heat in winter, and serves nothing but Stoli. Mayo mocks our nostalgic feelings for our good ol’ enemies.  Kruchev and Trotsky and Putin become club sandwiches. The owners masquerade as Trotsky and Frida Kahlo, the Communists of yesterday who have become woven into our culture as caricatures.

Mayo’s characters range from communist cosplayers to kids. In “Commie Christmas,” for example, a young man tries to convince his kid brother that Santa Claus is a communist who redistributes toys. The protagonist secretly hopes the Cuban Missile Crisis will pose enough of an existential threat that his parents will despair and buy him what he wants for Christmas, a nine-transistor radio. “The Big Healy” follows poor thirteen-year-old Maude, master of the patented roller eyes goofy face, who is mortified when her father, a math teacher at her school, busts into her English class moments after Oswald’s bullet has split JFK’s skull and says in front of his daughter’s class, “Well, it’s about time someone shot that commie bastard.” Maude’s reputation takes a nose dive and even her best efforts to show her love of Kennedy through a scrapbook assignment can’t reinstate her to grace. Mayo makes us laugh at Kennedy’s subsequent canonization more than the assassination.

The titular story, “Survival House,” takes place in an exact replica a house from Survival Town, the nuclear test site in Nevada, recreated in, where else, but rural Ohio. Like us, the characters are living in the remnants of the Cold War. The narrator’s wife, Cassie, a young scholar of the nuclear age, grows infatuated with their landlord, Quart, an elderly architect who designed the plans for Survival Town, stole the blueprints, and recreated his long since eviscerated structure, right down to the 1950s décor and menacing bomb-drop tower.

Mayo works in this nuclear space for much of the collection, but there are enough breaks from the Cold War thread to add ample variety to Survival House. For example, in “We Wandered Ourselves Back to One,” a manager from Luckey, Ohio’s department of public works has a very literalistic interpretation of the Daoist concept of wu-wei, a sort of fatalistic version, and one that relieves him from responsibilities to others in hilarious ways. The story begins as he passively allows a valve on a septic truck to burst and spray his workers with excrement. While they clean it up, the narrator visits his hobo friend for a free burger. When asked to flip the burgers so his friend can continue playing hobo tunes on his accordion, the narrator says, “I went over and rattled the lid of the grill so he can hear it. But I didn’t lift it up. I just pretended to flip his burgers, and served him right, sitting there, plugged into the nineteen-thirties while someone else took care of the here and now.” It’s a slapstick story, and, if I may play favorites, one I particularly enjoyed.

The final story in the collection, “The World Is Ending Yesterday,” sees an American man, a son of a nuclear scientist, visiting missile sites in Lithuania. Mayo’s humor is here, of course, but the story showcases another tone, too, one that reminds us of the somber realities of our lives, nuclear war among them. The story explores boundaries and barriers between people, between generations, cultures, individuals.

While reading Mayo’s stories, we face a paradox. The Cold War was, of course, a standoff between two nuclear powers. It involve the USSR parking a missile miles from Miami, it invoked terrible fear, hatred, misunderstanding, propaganda, apocalyptic nightmares, and more. But it also corresponded with an age of economic advantage for many people in the United States that has since been taken away from us. The children of the 1950s, now our retirement population, feel nostalgic for their formative years, and they have handed that nostalgia down to subsequent generations. They grew up in the long shadow of FDR, the New Deal, and the Greatest Generation. The irony is that, in spite of the economic advantages they enjoyed, they were the first generation to live under the conditions of mutually assured destruction. Over the years since perestroika, glasnost, and a supposed Reagan/Gorbechev lovefest that freed us from imminent doom, Cold War imagery has been interpolated into a quirky memory, something campy, something that reminds us we didn’t blast the Russians off the face of the planet, they didn’t melt New York and L.A. That the Doomsday Clock currently hovers minutes before midnight does little to return us to a Cold War mindset. It is, in our collective cultural narrative, a thing of the past. In Wendell Mayo’s satire, we get to keep on laughing in at our doom, and we get to laugh at how silly we all are for laughing.

Eric Aldrich is a writer and an English professor at Pima Community College in Tucson, Arizona. He’s had short fiction in various publications, most recently the Manifest West anthology from Western Press Books and The Worcester Review, as well as work forthcoming in Weber: The Contemporary West.