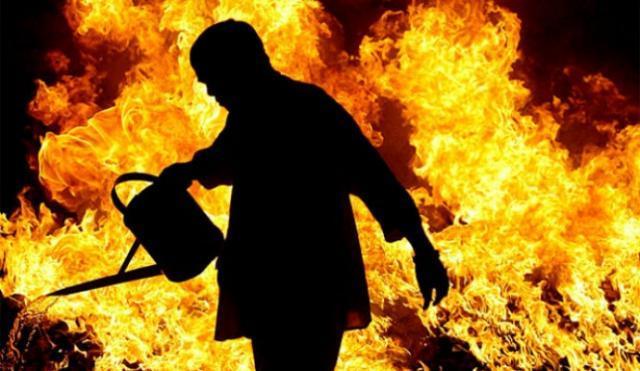 A Night, Like Any Other, or Ooh, That Smell

Gasoline is poured on the dead face. The body, entirely saturated. Drying blood charges with the illusion of new life as the gas sweeps across the body. There is a match, torn from its book with two trembling fingers, struck and placed. It lands on the chest, a ring of blue bursting magically forth around it, like a ripple from a pebble in a still pond. And there is a flame—five feet eleven inches head to toe, a wall of seething heat, arching and whipping high into the already humid Georgia night. There is a smoke—stirred and swollen, grand and dirty, thick and pungent. And there is a smell—gas fire, then singed cloth and hair, then putrid bitter bite of burnt flesh. Open eyes, stung red with smoke from red flesh and flame. A gray smoke plays among yellow teeth as a smile slowly and wickedly forms. His scrotum tightens up to match his anxious stomach. Bathed with satisfaction, in the scarring air, fostering memory, Jimmy Red walks back to his mother’s truck. It is a night unlike any other.

A door stands with one side bearing a stolen metal “No Trespassing” sign facing out to the main hall of a small two-bedroom ranch-style house while the other side, bearing a Baywatch poster of three swim-suited women, faces in on Jimmy. Naked from the waist down, he holds his penis in his left hand. Young Master Red uses his right hand to slowly turn the pages of a magazine, from back to front.

The left hand loses its grip on its shrinking prisoner. A wet tongue searches a dry mouth. A loose tooth. The tongue pushes the tooth in a slow grinding groove as Jimmy bites his lip.

“Where were you last night, Jimmy?”

“Are you alright? You didn’t hit a skunk or anything did you?” “Nah.”

“There some clothes soaking in the sink. You want me to wash ‘em?”

“If they been soakin’ all night, how come they still smell so bad? What happened anyway?”

Through the door Jimmy is heard to tremble, yet still she walks away.

Jimmy’s father was a pig trucker. “Big Red’s Hog Haulin’” read the sign on the truck. He hauled swine all over the southeast. When Jimmy was eleven years old, his father steered a load of pigs towards Kentucky and never came back. Over the last five years Jimmy hasn’t eaten pork once.

7:30 brought many sounds: Wheel of Fortune on the TV; the sigh of the recliner giving of itself to support a tired woman’s large weight; the opening of Jimmy’s window so he wouldn’t have to see her as he left. He denied her dinner already and he knew she would leave him alone.

Down at the Citgo station, the regular group of kids mulled about. Jimmy passed about them slowly, stiffly. His baseball hat, low, shadowed his twittering, flittering eyes. Darryl was the first to notice the smell.

“Shit, Jimmy, you been bathin’ in your barbecue again? You smell like burnt meat, boy. Gawd Damn!” That was Darryl.

Like rats, they circled in. The smell was thick enough to attract the whole crowd. The ridicule was easy and the weakness was pungent. Darryl wasn’t the biggest. Lennrd was the biggest, his size saved him from the difficulties of the missing vowel, and he naturally assumed his place directly in front of Jimmy.

“So Bastard Jimmy is now Stinky Bastard Jimmy.” Awkward laughter. Lennrd is always right. If Jimmy is uncool, Lennrd let them know, and they should act accordingly.

“I ain’t no bastard.” He seemed to spit a little as he spoke. “Then where’s your daddy, bastard?” The crowd waits with a secret fearful joy.

“He’s out haulin’ pigs, tha’s all.” The lie came out like a whimper. “He should be at home haulin’ that pig of a mother of yours.” Lennrd peppered his words with a poke of the pelvis. The crowd let loose. The pelvis kept poking as the face made pig snorts. Fist clenched, face red, Jimmy’s eyes swelled. He stammered. He spit. Lennrd punched him in the face. Jimmy went down with blood on his lip and another loose tooth. The space around Jimmy became denser. Eyes widened. Kicks connected with his ribs and face-defending forearms.

His right t-shirt sleeve thickened and stiffened as more snot, blood, and tears were wiped on it. Both sleeves were beginning to have the rough guilty texture his shorts have when he wakes up from those “dirty, dirty dreams,” as his mother calls them. Jimmy sat on the steps to the back door of his dark, quiet house. He wished there were somewhere else to go and slowly rubbed his sore gums through his cheek, staring hard at the dense wall of Georgia pine trees that trapped his view.

A sloppy, old golden retriever loped from the left to the right of Jimmy’s field of vision home to the next door neighbor’s house.

“She mus’ smell that mighty smoke on me, jus’ like all of them. They don’t un’erstan’ I earned it an’ I’d do it again.” Jimmy spoke out loud to himself.

“I’d burn you too, you … you … you bitch-dog.” As he stuttered, he lifted a handful of rocks and released them like a spreading buckshot all about the now distant dog who trotted and whimpered, but did not look back, familiar with the ways of man.

“If they only knew. If they only knew what I could do.” Through the tears, Jimmy began to soliloquize. “I’d show ‘em. Yes, I would. If only they knew. There is someone who knows. Oh yes. But he ain’t talkin’, no he ain’t, but boy does he know. He ain’t got nothin’ left to talk with, I saw to that.” The tears fell away. “Shit. If only they’d see him jus’ like they smelled him they’d be damn sick with knowing. They’ll find out though. It’s got to be on the news or somethin’ soon. They’ll see it on the news and they’ll remember my smell and it’ll be clear who to watch out for.” He rose and began to pace. “An’ they’ll be scared of me an’ of what I might do to ‘em. They’ll know their noses were right. An’ they won’t go thinkin’ I’m no bastard no more ‘cause I ain’t no bastard an’ I’ll burn any body that say so.” He was really hot now. “I might not start shit, but I finish it. Anyone can start somethin’ and leave but not everyone has what it takes to finish shit, like I do. Jus’ like I finished that one last night. I sure finished him. Who knows who started him that way, but they left and I sure finished him. Some other might do the killing, but I do the burning, I do the finishin’. Yep, and I’ll finish them all too, those bastards.” He was getting louder and louder. “They’re bastards, them. I ain’t no bastard. I ain’t no BASTARD!”

A light came on in his house and Jimmy could hear his mother call his name while at the same time the forgetful golden retriever came bobbing back as if bastard was its trained summons.

“Jimmy!” his mother called again, as he hit the dog with a rock just below her left eye, causing her to wink, yelp, and turn away, forgetful no longer. The dog, homeward bound and pitiful again, was almost struck by another spite-charged stone when Jimmy’s mother came to the window.

“Jimmy what the hell are you doin’? You have school tomorrow. Get your butt in bed right this minute!”

“Shit, Mah!” Jimmy asserted, and yet went straight into the house to bed.

Jordan A. Rothacker is a poet, novelist, and essayist living in Athens, Georgia, where he earned a Master’s in Religion and a PhD in Comparative Literature at the University of Georgia. His journalism has appeared in periodicals as diverse as Vegetarian Times and International Wristwatch, while his fiction, poetry, reviews, and essays can be found in such illustrious venues as Red River Review, Dark Matter, Dead Flowers, Stone Highway Review, May Day, As It Ought to Be, The Exquisite Corpse, The Believer, Bomb Magazine, and Guernica. For book length work check out Rothacker’s The Pit, and No Other Stories (Black Hill Press, 2015), a novella (or “micro-epic” as he calls it), and his first full-length novel, And Wind Will Wash Away (Deeds Publishing, 2016). He edited Maawaam’s My Shadow Book (Spaceboy Books, 2017), loves sandwiches (a category in which he classifies pizza and tacos), and debating taxonomy almost as much as he loves his wife, his son, his dogs, and his cat, Whiskey. A collection of weird tales, Gristle, in which “Winter Solstice” appears, is forthcoming from Stalking Horse Press.