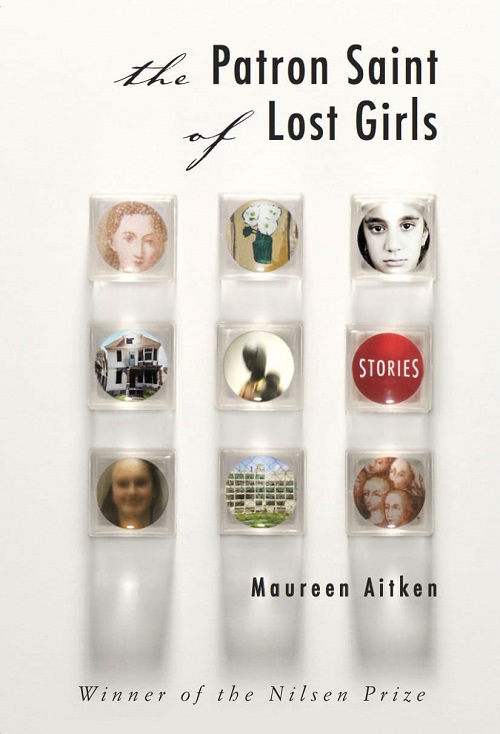 In Maureen Aitken’s collection The Patron Saint of Lost Girls, linked stories sure to compel and move, Mary grows up in Detroit, where poverty, addiction, and death are all parts of her daily life. A story of triumph over violence, poverty, sexism, and more, Mary displays resilience throughout her childhood and young adulthood against the tragedies that life so often ensues.

In these stories, Aitken manages to write prose that sings along the page, leading us through pain, tragedy, and finding oneself in the most beautiful way possible. On top of the wonderfully winding prose that keeps us turning the page, the book contains an abundance of extremely specific images as well as metaphors that serve the point of the text while giving insight to Mary’s lifestyle and character. For instance, in “Roby Burns,” Aitken compares the narrator’s grandfather to the berries she and him picked together, saying, “he was like the berries. You couldn’t pull too much with this question or that question.” Aitken uses these metaphors and images to build up the ultimate image of Detroit in the 1970-80s as well as Mary’s character.

Mary isn’t the only character well-developed throughout the text, as Aitken provides in-depth characterization for nearly every character, no matter how unimportant they seem—even the dogs get characterized and serve a purpose to the narrative! We see a lot of character development in the recurring characters in the novel. Meghan’s and Mary’s perspectives on their life change drastically throughout the collection, often in polarizing ways. We are able to witness the two girls go through life both together and separate, always meeting somewhere in the middle to confide in one another, showing the strength in familial bonds.

In Mary’s character, we watch her grow up while listening to the story from her first-person point of view. Aitken does a wonderful job of transitioning us through Mary’s life, going from the juvenile perspective, thinking things like “My brother was cool and I was a moron. My sister was artistic, and I was still a moron,” to an older version of Mary who thinks things like “Detroiters don’t get hangovers. They have headaches. They have cranky, insolent attitudes. Hangovers are for preppies and wimps.”

The world has been aching for a piece of literature that touches upon the topics that Aitken covers throughout the collection. Poverty is a main form of conflict that finds its way throughout stories. We get to see the nuances of poverty and the way that it follows people from generation to generation. Another focus of Aitken’s work is the idea of rejecting sameness:

Someone else could have the sameness that was out there, down a road, and out past the suburbs, out beyond my wildest belief.

Rejecting sameness is a theme that will tug deep into the soul of many rural or suburban readers who grew up their whole life in the same place doing the same thing. Mary’s need to break out of the box she is confined to is refreshing and inspiring.

Aitken doesn’t shy away from uncovering uncomfortable societal truths and covers a range of women’s issues throughout the collection. Aitken manages to cover these issues in a nuanced way, lacing them into all of the other problems that Mary faces, which is an extremely accurate portrayal of what the female experience is like. With blunt phrasing like, “A woman always had more to lose. A guy could get shot. A woman, well, I’d had friends who’d lived through worse,” we get direct insight into what women go through to feel safe and protect themselves.

This collection of stories takes us through this journey of finding oneself in the midst of all these issues in an honest, sincere, sometimes funny, and often delightfully mundane way. The way that Aitken can take a scenario as simple as picking raspberries, helping a friend clean up after a party got out of hand, or learning how to drive, and make it into a read on society or the deeper meaning of life is truly amazing.

Overall, Aitken’s The Patron Saint of Lost Girls is a moving examination of the complex emotions that come along with womanhood, poverty, and growing up in an unforgiving world. The stories are linked together which allows us to see character growth and a clear timeline of Mary’s life. Each story can stand on its own, but together they paint an unforgettable work of art.

Buy The Patron Saint of Lost Girls at Amazon

Téa Franco is a junior at Winthrop University pursuing her BA in Mass Communication and Political Science with a minor in creative writing. Her main area of interest in literature and writing is those stories that revolve around social issues. You can follow her and read about her journey through college, the writing world, and beyond on twitter @teaAfranco