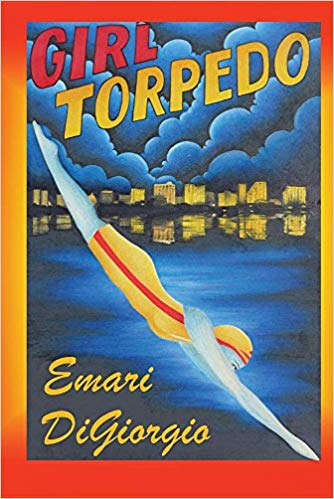 As luminaries Allison Joseph and Natasha Trethewey have already noted, DiGiorgio’s Girl Torpedo is a book that’s needed—needed to remind her readers that this struggle, this deep human yearning to be whole and to share, to recognize and to understand, and to call out is at no truce or ceasefire. Like the ever-present, heavily-armed battleship that is masculinity, Girl Torpedo seeks to punch holes in its hull, to sink, or at least effectively dock, its consistent barrage on women’s political, social, and cultural agencies. DiGiorgio’s work does not stop, nor necessarily begin with women, however, or simply critique dominant ideology for that matter—the effectiveness of this collection is that it addresses broad structures of power and hegemony that consistently seek to undermine and manhandle bodies and positions, the spaces and places that feed this power’s needs. Refreshing, and understood too, in DiGiorgio’s work are notions of complicity, responsibility, and the ways in which privilege operates in the cultural and social milieu illuminated in these resonant, personal, and fiercely political poems. And while the image of the girl torpedo sinking the battleship frames DiGiorgio’s sharp, intensely felt language through the entire work, she certainly does not supply a mere one-trick metaphor throughout her book. The attention to craft and detail is obvious, her larger themes and pointed motifs strike just the right balance between each poem revealing a complete work.

“Where does a girl torpedo strike an old battleship?” asks DiGiorgio in her potent opening salvo from the poem titled “Where Does The Rabbit Go When The Hounds Are Loosed.” Here DiGiorgio deftly plays with a modified sixteen-line sonnet keeping each tight couplet consistent with two enjambed lines with an end-stopped question with nearly every third line. Only slightly altering the pattern toward the middle of the poem, the varying line effect simultaneously creates balance and imbalance with a low-boil tension that serves to strengthen the poem’s multiple fervent questions.  In particular, lines five, eight, eleven, twelve and thirteen, respectively: “Where’s his… ,” “Where are… ,” “Where did she go… ,” and “Where is each he who…”  highlight the power of the interrogative where, is crescendo-like, exudes anticipation, and leads us to a cliff of possible answers. While these lines may not initially seem to depart from the consistency and punch of all of the where questions within this poem, the strength of these particular enjambed lines are full of rhetorical effect, creates just enough of a pause while the readers question his or her own privileged beliefs that these questions evoke. This poem, smartly placed at the beginning of DiGiorgio’s work, underscores and presciently offers what’s to come in these highly revelatory poems.

As much as the rhetorical strength of the interrogatives in “Where Does the Rabbit Go When the Hounds Are Loosed” shakes readers into an uneasy awareness, “The White Horses of Wainui Beach,” offers readers additional depth and insight into DiGiorgio’s important subject matter. At first glance, this poem could be about human vs. nature, about the degradation of what exists beyond our immediate control and exploitation. However, with DiGiorgio’s first full sentence—“I’ve felt the dredging stride, a hoof / upon my chest or back.”—the speaker seems bear the weight of a yet unnamed “thing,” the pressure and the danger. DiGiorgio quickly, yet subtly shifts the focus into the metaphorical body of horse that bucks and rears. This horse takes on simultaneous meaning as it becomes the thing to control, yet too a symbol of defiance and, eventually, rebirth as it runs “aground and vanish[es] in the foam as if / tethered to the plow of the sea.” DiGiorgio adeptly weaves the two lines that begin and end this poem as those calla-white horses become critical commentary.  These last two lines engender conflict and reconciliation simultaneously. We feel “[…] the dredging strike…” and, with poem’s phoenix-like desire, we “wish to know / what it is to shatter and resurface whole.” Notwithstanding the myriad ways with how readers might approach this poem, it’s DiGiorgio’s ability to complicate a single narrative of hierarchy and power by imbuing these images of nature, water, and the horses with complicity and responsibility, with resistance and a hope for rebirth that makes this poem sing loud.

As readers quickly sense, the poems in DiGiorgio’s work are full of energy and momentum, tear open and heal through every word and line. Her deeply personal “When a Fetus Turns to Stone” and “Five Years of Infertility, Ending with a Child” continue to reveal and reinforce an unshakable personal voice. DiGiorgio’s language and craft tether and release and tether and release us again to an experience through the plenty of her richly layered images. With no moderation in tone, style, and imagery, “The Infant Corpses at the Home for Young Girls” and “The Mother” continues to take readers further into the depths of the lost, alone, and unacknowledged. Perhaps that’s the power of these poems—they force an uncomfortable though needed recognition by her audience. Still, it’s DiGiorgio’s “Toddler Pulled from Rubble in Aleppo” that strikes both the personal and political never letting her readers forget that there is a world outside of our own, reminding us that we are responsible for the violence, the what’s next?, and also the responsibility that is the aftermath. That last, devastating couplet is reminder and question enough—“To survive or thrive: the distance / between two buildings, which end of axe in hand.”—of the West’s distance and apparent indifference, our moral culpability hanging on the weight of that “or.” The sentences and line breaks are pitch-perfect in this poem, send us careening faster and abruptly braking on a word or an image that continues to linger even after the we’ve closed the book.

In full motion, DiGiorgio’s graceful trapeze-artist swing from the more personal to the decidedly political is seamless in the remarkable “The Grand Opera of the Boko Haram.” Here DiGiorgio credits Henry Reed’s “Naming of Parts”1 as she too meticulously, though with greater unbridled, graphic imagery, names the parts of this tragic, lethal opera. “Torture” and “rapes, “machete” and “whip” are enough to highlight Boko Haram’s grim performance, but the pellucid juxtaposition of such instruments of violence, both literal and figurative, such as “an eyeless machete” to the “Cheshire grin” and the “whip” to the “voice of the soprano arias” ushers her audience to an untempered gasp and stark reminder that Boko Haram’s terror is not over. Again, DiGiorgio’s delicate hand creates an instrumental metaphor that is harmonious and resonant in its soul-crushing stanza-like acts.  Powerful too is DiGiorgio’s language and the ways in which it leads readers through this contemporary narrative to its pulse-heavy conclusion. Her cutting sentiment consistently maintains its focus and takes aim from our sometimes myopic view of self and sets it on the cultural and societal paradox of our notions of cultural relativity. As much as DiGiorgio asks us to look outward, she forces us, particularly with this poem, to take a critical look inward. Certainly DiGiorgio’s poem “Aleppo” poem shames even the lackadaisical and uniformed, but it’s the casting of Boko Haram as a mad opera that reveals self-awareness in her work, points out and draws attention to much of the critical commentary that underscores this entire collection.

The poems in this book certainly evidence a poet with a skilled hand in both image and line, movement and tension, but DiGiorgio’s triptychs are arguably the most illustrative with regard to those elements of craft. Three triptychs in total, “Un-Naming a Thing,” “New Math,” and “More or Less American” round out this already superb collection. While these triptychs seem to move logically by reading the tiny couplets as units and across the page from right to left, the discovery (and rediscovery) of meaning is left to the reader by uncoupling the lines, or reading down each column. Troubling but also accurate, DiGiorgio captures our contemporary zeitgeist with these triptychs. Snippets from “Un-Naming a Thing” like “Limbs pinned / or slack, body relaxed” and “—the body / betrays me Was I / able to fight or did / I go limp” to the heavy question “in not naming an act / What else / to call it?” and the descriptive “Husk of a girl” take on date rape, the kind of barely audible casual violence against women by an unlistening and anware perpetrator (and normalized society) with language that is both spare and unrelenting in its telling. From “New Math,” DiGiorgio takes on the intersections of class, race, and privilege best typified by the lines

afraid to lose
my privilege

It is that “self-same repeating pattern” that Digiorgio highlights that makes this kind of privilege invisible, yet comfortably visible from a distance. DiGiorgio doesn’t stray far from those un/privileged intersections with “More or Less American.” This poem addresses the paradoxes of identity and place, who gets to name and who is named. The energy can be found in much of the highlighted italics:  “you’re / not from here”; “That’s not / what I mean”; “No, as in America”; and “I ask where / are you from? / not here / he says, exiting”. This triptych in particular allows even greater movement between the couplets and columns. “More of Less American” offers readers even more depth once we’re finished with where we might find ourselves on the side of that question: “where / are you from?”  Do we ask or are we asked that question? It’s worth noting again the opportunity DiGiorgio offers readers in co-constructing meaning as we read these lines in a logical way, yet are able to envision fascinating aphoristic couplets, imperatives, or observations and meditations.

Despite DiGiorgio’s sharp, critical language, her pointed images, and fine-edged line breaks that loads the torpedo tube and fires again and again, this book is not without its soft edges too. The final poem leaves readers to sit and ponder, think about where we might fit into where DiGiorgio asks us to go with these poems. “What Is There To Be Learned” is a poem of longing, of conditional “ifs,” one of looking back at a past that wrestles presently with awareness and agency into a future self. No surprise that this poem too is thick and rich with images, skillfully organized in tercets, each sentence and line playing to our high expectations. The language is effortless and inviting as DiGiorgio moves us to own that lyric-I, sets us in the whorl of verse from beginning to end especially in that last two stanzas:

and if I keep using the conditional

there’s a chance it’ll happen, right? In my throat, barbed
wire coils, and meaning drags itself over, pant leg caught,
blood at its heels. I have not become whoever I will become,

but this is who I am now, and it is all I can offer. What I’m
trying to say is: in July when the irrigation guns grew hot
Enough to seal an eye shut, I was most afraid of myself.

We hang on the was, go back to a present and better future self, and find the courage to broach the subject matter in these poems with a willful, unerring awareness. Because of these poems we too will become better and see that the “all” we can offer can be considerable. Much like “What Is There to Be Learned,” each poem in this collection tells us that there is much to learn, contemplate, and savor in our world, and in this new collection.

1. In  Reed’s “Naming of Parts, the poem recalls a kind of rote firearms instruction as he names the parts of the recruit’s WWII bolt-action rifle.↩