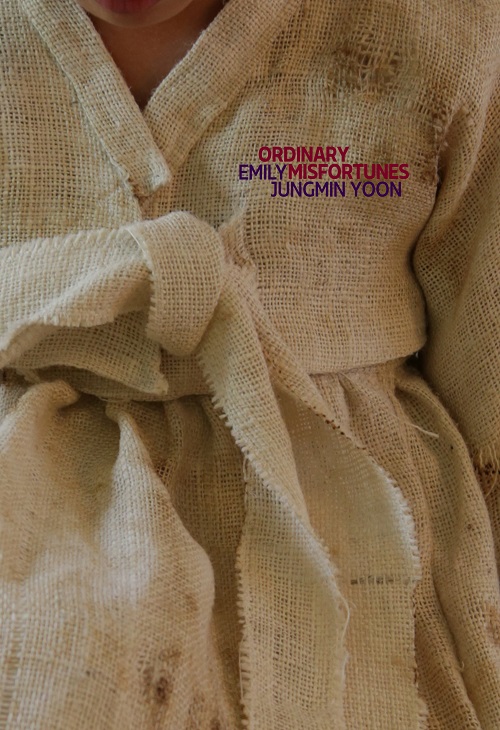 Chosen by Maggie Smith as the winner of Tupelo Press’ Sunken Garden Poetry Prize, Emily Jungmin Yoon’s chapbook Ordinary Misfortunes considers sexual violence against women, investigating the varied forces that enact and normalize it, while also focusing on what such violence means for women. In particular, as Ordinary Misfortunes weaves together historical and contemporary times, places, and experiences, Yoon makes primary the voices of “comfort women,” a euphemistic term for the Korean sex slaves of the Japanese Imperial Army during World War II. Through the attention to these voices, the poems of Ordinary Misfortunes insist we recognize the violence at the margins of what we think of as “real” war, the battles fought in front yards and fields, in domestic spaces.

The chapbook includes fourteen poems, including a series of prose poems, each titled “An Ordinary Misfortune.” Each “An Ordinary Misfortune” highlights, through the grotesque understatement articulated by the title, the gendered violence experienced by women, and the violence of its standardization. Likewise, the collection’s centerpiece, the long poem “Testimonies,” is a poignant exemplar of documentary poetics, made up of seven testimonies from women once held by the Japanese Army. Ordinary Misfortunes is an extraordinary, well-crafted text—one that makes visible historical and contemporary violence, and its ongoing impact, revealing and individualizing, without reconciling to or removing responsibility for, regularized suffering.

One of the ways the collection investigates violence is through a fluid, associative movement between ideas, including movement between the general and the individual, the distant and the personal, and the historical and the now. In the beginning, the opening poem, “News,” shows this movement through the way the speaker interacts with reported information (not taking it over or subverting it into metaphor, but rather trying to understand it), and this interaction reflects the speaker’s care with stories of the comfort women that are to come.

Framed by “an article on how to eat an apple,” the poem turns immediately, with the speaker “eating a pear and thinking / pear in Korean is a homonym for ship or boat.” The speaker is outside, beyond, or excluded from the prescriptions imposed by the article, eating a pear rather than an apple, but connected to them (a kind of dual-positioning the speaker will reference in a later poem: “War hasn’t left Korean. I have”). This leads to a description of the MV Sewol ferry disaster, more news: “It carried mostly young students / on a school trip, told to wait in the stomach of Sewol while / the captain and crew fled.” Through associative leaps, the poem points first the devastating, violent loss of the students, and then to the speaker’s own understanding of self and place in this world. For example, later in the poem, the speaker thinks of the surviving students at their high school, reflecting: “Sewol, how did I love at seventeen?” By the end, the speaker returns to association as a way of not only making sense but of making restitution (for loss, for different kinds of consuming) with “A homonym for apple is apology. I am sorry, / I say to the pear’s core, to the seeds in the sunken belly.”

The way language works throughout the collection investigates the gendered violence it witnesses without oversimplification. Instead, such turns of language allow for the blending of places and experience through linguistic connections and deviations. As the language of each poem evolves, it changes, with each transformation its own beautiful moment that also contributes to a larger, interconnected meaning. Yoon shows how a word can be preserved in context and yet multiply or expand in meaning, often crossing times and cultures. In this process, she demonstrates the power of language, and its connections to other kinds of power, as well as suffering, knowledge, and understanding. What we see then, in poems like “An Ordinary Misfortune” (excerpted here), is not the limits of language but its expanse, pushing each word, deepening the poem’s well of connotations:

The trouble with trees is that their bodies and limbs are too capable, capable of burning, of living, capable of leaves, of leaving, charcoal, ash, and we think we have power. Capable, 1561, from Late Latin capabilis, “receptive,” Unit 731 of the Japanese Empire injects us with monkey blood, our limbs are not receptive, Capable, used by theologians, from Latin, capax, “able to hold much,” our living bodies and extracted children, not holding, not Capable, capere “to take, grasp, lay hold, catch, undertake, be large enough for, comprehend,” how to take, how to grasp, comprehend, our limbs catch fire, taken, our bodies not large enough, Capable, Sanskrit kapati “two handfuls,” to handfuls of intestines, are they Capable, Greek kaptein “to swallow, gulp down,” pills, gas, what more […].

In a later “An Ordinary Misfortune,” this turning is also made even more powerful through concrete, specific experience: “She is girl. She is gravel. She is grabbed. She is grabbed like handfuls of gravel.” And later, “Korea is gravel and graves. Girl is girl and she will never be a grandmother. […] She will be girl, girl, girl is gravel and history will skip her like stone over water. Oh girl, oh glory. Girl.”

Elegiac in its honoring of what has been lost, and what continues to lose and grieve, without also losing sight of all that (who) bear responsibility for past and ongoing suffering, Yoon’s Ordinary Misfortunes is a profoundly significant text, one that makes and unmakes, one that separates and connects, one that honors experience. As Yoon writes in the ode-like “Comfort,” “for the children they bore. For the children / they could not bear. For the children / they were. Give them this day.” What a remarkable vision Yoon presents to the reader in this text, asking us to consider, “Who will live, / who will leave, who believes this life.”

Callista Buchen is the author of poetry chapbooks The Bloody Planet (Black Lawrence Press) and Double-Mouthed (dancing girl press). Look Look Look, her debut collection, is forthcoming from Black Lawrence Press. She is the winner of DIAGRAM‘s essay contest and the Langston Hughes award, with work appearing in Harpur Palate, Fourteen Hills, Puerto del Sol, Salamander, Whiskey Island, and many other journals. She teaches writing at Franklin College in Indiana.