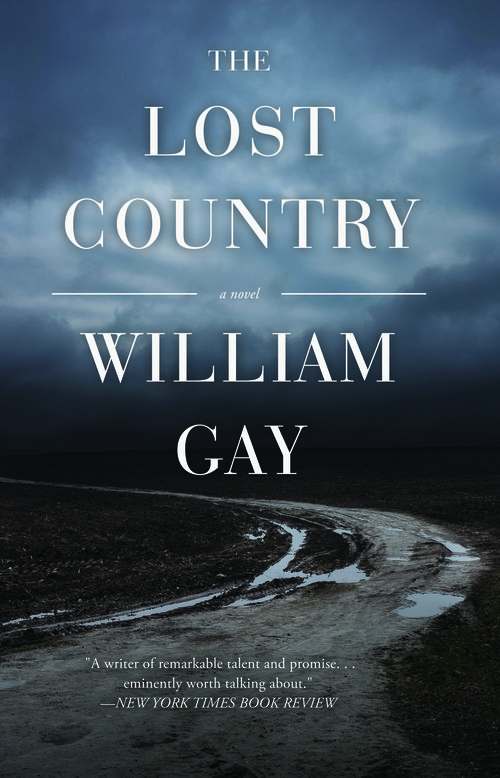 One cannot help but wonder what the world of southern gothic literature might be like had William Gay published earlier in life. Much like Faulkner, McCarthy, and O’Connor, Gay was a master of the bleak and the beautiful, able to break your heart in one sentence and cut it out and toss it on a spitting pit fire the next. His writing hearkens back to an older vision of America that lends a credence to the troubling issues of modern times. And his latest posthumous novel, The Lost Country, is certainly no exception to that rule.

Originally considered lost following his death, thanks to the folks at the wonderful indie press, Dzanc Books, Gay’s newest work has found the light of day. Much of what has given Gay a cult following in the literary world is on high display here: a troubled and wandering anti-hero, a wide-ranging cast of vagabonds that vary from sinners to saints, and a particular yearning for the quixotic idealism of certain rural small-town fringe societies—places “where lives were so marginal they seemed scarcely to exist at all, everything that passed between the paper that proved their birth and the paper that proved their death just rumormongering and hearsay”—a landscape that can only be described as uniquely, perhaps painfully American. But the true phenomenon of a talent like Gay is his seemingly effortless ability to weave a tale that requires no true definable plot thread other than to mesmerize the reader with astonishing prose and a gift for storytelling—it matters not where we follow protagonist Billy Edgewater throughout The Lost Country, we’re happy to be along for the ride.

Edgewater, like many of Gay’s rough-cut main characters, has been scorned by the world and is struggling to get one step ahead of his never-ending series of setbacks in the mid-1950s. On his way across the country to say goodbye to his dying father after being kicked out of the navy, Edgewater hitchhikes from place to place, slowly making his way home while running into some brutish form of trouble every step of the way. On his travels, he meets many interesting characters, including a number of women that weave in and out of his life. While Edgewater reflects on these women, he often contemplates what his life might be had he done something differently in his past, and these ruminations showcase Gay’s immense genius for summoning up the duality of perception—the contrast of the light and dark within us all. While watching one woman whom he enters the story with, Gay brilliantly describes these counterpoints:

He turned to study her against the slipsliding landscape. There was a faint blue bruise at the corner of her right eye and a scratch on her cheek but with the wind blowing her hair and the silk scarf strung out in the breeze she looked rakish and well satisfied with herself. In the brief time he’d known her she seemed always to be playing some role. Seldom the same one twice. Just the star of whatever movie today was. He’d had the impulse to glance about and see were cinecameras whirring away, a makeup man with his potions at the ready.

Then as he watched her profile seemed to alter. The flesh itself to sear and melt and run off the skull and cascade down the linen blouse she wore and the linen itself blackened and rotted and the wind sucked tatters of it away and when she turned to grin at him, bone hand clutching the steering wheel, the hollow eyesockets of her skull smoked like a charred landscape beyond which a faint yellow light flickered and died. Her grinning teeth had loosened in their sockets and there was a blackened cavity where the right canine joined the jawbone.

Passages such as these are peppered throughout the novel, highlighting what has become a gold standard in the southern gothic tradition: what is at once beautiful and pastoral can quickly become a hellish nightmare. As Edgewater makes his way across the rural south, hopping from honky-tonk to honky-tonk and landing in and out of local jails, he leaves a veritable trail of emotional destruction and bruised bodies in his wake, and he’s described by Gay as “the phone that rang deep in the night, a death in the family, bad news at journey’s end.” Still, despite his obvious flaws, it’s readily apparent that Edgewater is wholly human and though he is no hero, much of what animates him is his troubled past buried deep within, locked tight behind that emotionless exterior, escaping only in the form of his vivid and haunting dreams which Gay illustrates exceptionally and scatters throughout the novel; Edgewater’s world is one with little remorse for the weak of heart and mind.

Long a lone, traveling figure, Edgewater becomes entangled with a woman who he finds out is carrying his child and the two rent a house and settle down. A man of little want and hardly any means, Edgewater tries on the role of soon-to-be-father and husband. During this section of the book, the reader is given an intimate peek at what Edgewater could only ponder about throughout the first half: what if his life had been different? A new memory enters Edgewater’s mind—one of a tragic loss that undoubtedly hits close to home with his new situation.

Presented with this radical change in course, he abandons his plans to head home to his family and opts to “give it a go,” only to find himself still yearning, still searching for that elusive meaning in a cold, unforgiving world. Needless to say, nothing remains settled for long in Edgewater’s new reality.

It is also here that Edgewater’s complicated relationship with his own dying father, and perhaps the entire notion of fatherhood as a whole, plays into the psychological forefront of the story. Long disturbed by the memories of his own dying father—a father perhaps already dead as he’d already turned from his path home—Edgewater is in a constant internal battle to reconcile his past and his choices, though like many characters in southern gothic stories, it is a quiet, solitary battle within, and often within dreams. In one dream, he recalls a pleasant memory of his father which is followed by a particularly subliminal image of a looming fear:

There was a verdant blue horizon so far away it lay dreaming in haze and he knew without knowing why there was something dread about it. Something awaited him there and a fear of it lay in him heavy as a stone but it did not turn him back.

Throughout the novel, Edgewater is careful never to reveal to anyone any truth about his family or his past, as if just uttering some mere fact will breathe life into an unspeakable horror that cannot be made right. Instead, he opts to live within his lies, reinventing himself in each new place he enters.

As the novel closes, Edgewater’s life has both changed dramatically and not at all, such is the magic that Gay can produce with his pen. Southern gothic is that rare form of literature where so much happens in the background—things hinted at off the page—that while there is sometimes not the neat and tidy conclusion many other genres demand, it never lessens the full worth of the story itself. There is so much to be awed by in Gay’s new novel and it only makes us miss him all the more, though it is a less-than-subtle reminder of how lucky we are to have had him share his talent with us while he was here. William Gay could write a grocery list and make it sing and burn off the pages in equal measure, and The Lost Country is yet another testament to his undeniable virtuosity with the written word.

Michael A. Ferro’s debut novel, TITLE 13, was published by Harvard Square Editions in February 2018. He was named as a finalist by Glimmer Train for their New Writers Award, won the Jim Cash Creative Writing Award for Fiction, and been nominated for the Pushcart Prize. Michael’s writing has been published or is forthcoming in numerous literary journals and print anthologies, including Juked, Monkeybicycle, Crack the Spine, Entropy, Duende, BULL: Men’s Fiction, Vulture, Splitsider, and elsewhere. Additional information can be found at: michaelaferro.com.