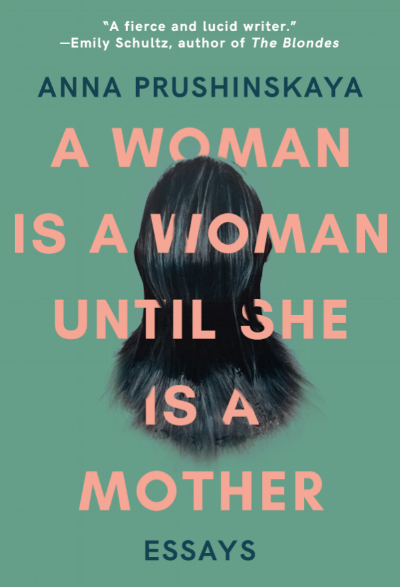 Anna Prushinskaya’s collection of essays, A Woman Is a Woman Until She Is a Mother, interrogates the meaning and experience of womanhood and motherhood. She looks at the blurry, liminal boundary between these two states and tries to come to terms with the fact that there’s no simple, reliable definition for either one.

Prushinskaya is, at various points through this essay collection, pregnant, giving birth, raising an infant, and—in an afterword—raising two children, and one of the things that most concerns her is the way that these stages blend into one another. Though roughly chronological, the essays traverse back and forth between identities and realities, woman and mother, past and present and future.

Crossing boundaries is one of the primary concerns of these essays. Our culture assumes, for instance, that there are distinct divisions between woman and mother, but Prushinskaya questions that assumption, showing how it doesn’t really hold up under scrutiny. These essays suggest that boundaries are more a matter of language than reality. They’re permeable and changeable, just as pregnancy throws into question notions of oneness, wholeness, and individuality.

The collection opens with an essay written while Prushinskaya was pregnant, though we don’t find out until afterwards, when she asks “Does it help to know this was written while I was pregnant?” The essay, “Love Letter to Woody Plants,” is about taking a course that teaches her to identify woody plants and trees. “I am giddy because I have identified a poison sumac,” she says in the first paragraph, setting the stage for a collection that is, in part, about labels and identification—and their failures.

This essay, like those that follow, is also about defining and crossing boundaries—in this case, between herself and the forest:

Often the forest is a backdrop. Now, as I walk and scan the paths for bark patterns, and then the understory, the leaves on everything, the way they move with wind, I become the backdrop to the forest.

By paying close attention, in other words—and by telling the story of this forest—she herself fades into the background.

The next essay in the collection, “Being Portal,” examines the notion of portals—openings from one place and time to another. Women, when they become mothers, also become portals, ushering in new life. As she says, “A woman is an opening. A mother is a portal, I think.”

Similarly, “Calling My Grandmothers, Calling the Frontier” is about frontiers—bodily, emotional, and national. Prushinskaya emigrated to the U.S. from Russia, and this essay looks at her family history and her identity as an immigrant. She tells us that “I am going to be the first to give birth in America, another reason it’s frontier-like for me.” There’s a sense of newness, both for her own life and for the life of her child.

At the same time, she’s interested in the ways that women always exist on a frontier, carving out new territory for themselves and their children. As she says, “labor is a frontier,” a boundary that must be crossed in the birth of a child.

As an immigrant, a woman, and a soon-to-be-mother, Prushinskaya describes in this essay a state of living in the borderlands between what has been and what will come: “People are part families, part random things that catch attention, part forgetting and rebuilding from the ground up.”

Many of these essays are also concerned with storytelling as a method both of creating worlds and making sense of them. The essay “Our Sphincters, Our Births,” for instance, opens with the following questions: “How are women’s stories told? Who hears these stories? What do these stories do?” Stories, after all, are a way of creating and transferring meaning between each other and between generations. There’s a power in narrative, and in being the one in control of a narrative.

Prushinskaya seems to be trying to wrestle her own narrative back from the culture, to be the one to tell her own tale, even when the culture insists on telling women’s stories for them:

The experience of pregnancy essentializes. A woman with the body of a pregnant woman tells her story often, and re-tells it, to the people who are close to her and to strangers… What is the project of personal essay writing if not gathering stories in service to organized thinking, in service of sharpening unruly, associative segments?

These essays are, in other words, an attempt both to tell her own story and to open up a portal that will allow other women and mothers to tell theirs.

In other essays, Prushinskaya looks at the ways that technology mediates between mothers and their children, at the experience of returning to work and breast-pumping in a supply closet, and at the dual desire to be fully present for her newly-born child while managing to find time for her own thinking and writing.

In an essay called “The Other Frontier: Not Motherhood,” she describes the experience and responses of women who choose not to become mothers, and she looks at the concept of choice itself, and how, when, and whether it applies to her life’s journey.

In each of these explorations, she’s trying to redefine the narrative, trying to find a way to talk about motherhood in an honest and forthright way, one that she creates out of the pieces, fragments, memories, and losses of motherhood. Throughout the collection, there’s a sense of wonder and mystery about this journey upon which she’s embarked. As she says, “Motherhood is an encounter, a shadow in mirrors, a beast laying low in the grass in the field. I have stumbled upon it the way one might stumble upon a snake which is rattling which is not a tree branch which is against the bark in lightning.”

Vivian Wagner lives in New Concord, Ohio, where she teaches English at Muskingum University. She’s the author of a memoir, Fiddle: One Woman, Four Strings, and 8,000 Miles of Music; a poetry collection, The Village; and a micro-chapbook, Making.