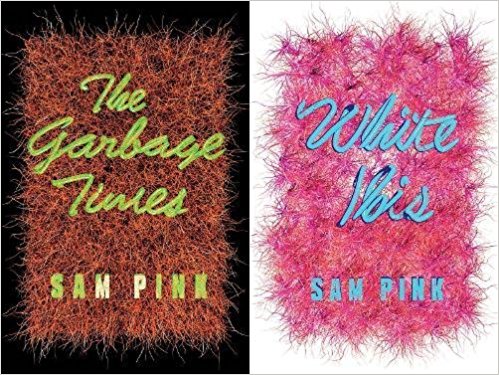 Writing about a book that I have creased pages with constant re-readings is a daunting task. Even now the fraying of the pages and bending of the spine speak volumes to the level of brilliance the book professes. My thoughts on the exploits of Pink as the character are almost as scattered and beautiful as the events themselves. There are so many things from Sam Pink’s excellent double novella The Garbage Times/White Ibis that I quote and feel are relevant in my own life. Of course, we don’t want to think that our chosen career path is going to be riddled with strife and hardships. No one wants to think that following their dreams leads to living in a one room apartment with little more than a cat and a scratchy coat for company. Cult author Sam Pink doesn’t shy away from this concept—no, as a matter of fact, Pink may grasp that there is more to suffering than just getting past it. Instead, Pink writes that suffering can be one of the greatest aspects of your personal story. And through his work he seems to ask: Is suffering all that bad?

From early on Pink highlights the fact that the life of an artist isn’t glamourous. In the first novella The Garbage Times there is no lovely home, no bookshelves adorned with the all-time greats. It’s Chicago in the winter. A place where everything is cold, everyone suffers, and being an artist doesn’t mean you don’t have to clean up puke. Many people think that once you decide on your career path, you only work towards that goal and, presto, it will become your story. The Garbage Times goes deeper into the phase of this plan that gets overlooked, that is, working. In Pink’s case, this work is a dive bar that is barely worthy of the title “hole in the wall.” Pink goes into great detail about these terrible days of toil, inventorying every gross thing, every time he wheels the dumpster up a ramp surrounded by exposed nails and broken bottles, or every time he checks on a bathroom whose toilet is overflowed. Throughout, you begin to gain respect for the struggle.

As a writer this story is one to which my contemporaries relate. It’s okay to work retail, it’s okay to live in squalor, you cannot only make ends meet—you can find stories everywhere that people will want to hear. Only you must write them down. The Garbage Times works so well not only for its content, but for the voice Pink uses to tell it. One line that sticks out in my mind every time I do a read through comes in the form of an average event at the bar:

The bartender said the night before they had to throw out some girl who was in the bathroom pants down on the toilet blowing a guy who was doing coke off the toilet paper thing.

The flippant way something this shocking is described astounds me. To most people this would be the end of their work day. For us, it is part of the daily toll. This stage of Pink’s life lacks any kind of grace but still he weens joy from the trashy world. It’s the trivial things—his daily routine getting drinks from the convenient store, his cat, the stories told by his coworkers—that all form this beautiful tapestry of sorrow.

Reading the book serves a symbolic purpose as much as a practical one. With the Garbage Times, I always picture a gray-and-white wasteland in between buildings, but White Ibis is a whole different thing. White Ibis steps far from Chicago—southward, into the colorfully warm and equally strange Tampa Bay, Florida. Another stark contrast to The Garbage Times is the lack of singularity we experience. In The Garbage Times, Pink is alone aside from a few cats and the odd person on the Chicago streets. This isolation is broken in White Ibis as his girlfriend moves with him to Tampa Bay.

While Chicago Pink lacked a foil for his grim outlook and often ignored the world around him, Florida Pink has a girlfriend who forces him to go out and perform the tasks of an average resident. You can see those around you who are monetarily successful, and you can respect that, but what is it that they really see in you? That you are someone with talent or that your art is novel? One of the best moments of this in the book itself comes when Pink’s girlfriend’s sister wants him to draw something for her child. She treats the whole thing as little more than a parlor trick. To her art is something you can be good at and you are good at every aspect of. There is this stigma that art is art and you can do anything in your field. Oh, you can write plays? Here, write a sixteen-hundred-page epic! Oh, you can paint? Draw my kid’s girl scout troop! You’ll be fine; it’s not hard for a real artist, right? Florida Pink exemplifies this struggle masterfully, shifting from the hidden artist who cleans vomit to a man forced into society. Turned into a monkey or busker. This really calls into question the identity of the man himself. He wants very much to impress this critic even if it is on a small scale. This scene speaks a lot to the artist’s need to feel reinforced in their craft. Here, we also reflect on the insecurities of an artist seeing their work as being good enough. No matter who gives Pink praise, he still worries that his art will never be good enough. This is in stark contrast to the Pink of Chicago who seemed very dismissive of anyone knowing of his craft. It takes the focus off survival as a human and puts it on surviving as an artist.

Speaking of the harsh reality of a situation, Pink doesn’t shy away from the misery of art. Chicago Pink wasn’t living in wealth, and while we were led to believe the move to Florida was going to improve this situation, we quickly saw this is not the case. Sometimes when you are a painter you don’t get to put your work in a major gallery, sometimes you just sell it to someone halfway around the world for less than it’s probably worth—but you know they will like it, and, in the end, art is something people are supposed to enjoy. As someone who one day wants to write for a living, the novellas prepared me a lot more than my classes. The Garbage Times/White Ibis is a chaotic, dark, and hard to put down object, if you plan to join any field that uses art.

Vivian Wells is a transgender woman from Ohio. A writer from an early age, she is an avid reader and horror fan. She spends her time watching wrestling (new day rocks) and giant monster movies (the wrestling of the movie world). Current ambitions include completing a horror anthology. For spring 2018, she was Editorial Assistant for Heavy Feather Review.