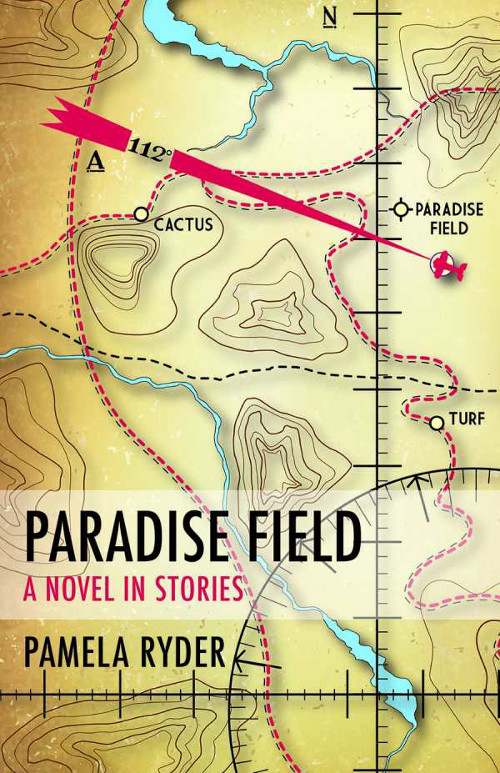 Pamela Ryder uses the instruments of fiction to dismantle received notions of grief and aging. With the death of her father as her noetic object, she picks up where popular end-of-life philosophers like Atul Gwande and Paul Kalanithi leave off. The result is a book whose humor, imaginative élan, and relentless attention to detail fuse into a category of its own making.

Paradise Field, like Ryder’s previous work, frames itself as “a novel in stories.” Her codicil graces the book’s cover, as if to prepare the reader for a genre experience that often feels like Tuesdays with Morrie by way of Robert Coover and Can Xue.

The book is comprised of nineteen stories, many mixing satire, split perspective, and genre fluidity that morphs between travelogue and commentary. A fictionalized version of the author, also named Pamela, is our guide throughout, performing an ever-changing gauntlet of roles: daughter, primary contact, more responsible sibling, caller of aides, overtired middle-aged wise ass—whatever the moment demands.

Fans of Amy Hempel and Marilynne Robinson will recognize Ryder’s protagonist as an arch-female voice wound between a clothesline strewn with doctor bills and soiled linen. Fictive Pamela may not be the most pleasant person to deal with, but she is the one dad calls when he has forgotten which shade of medication he needs to take after lunch.

There is also a lot of Roz Chast in Ryder’s second self. In “Internment for Yard and Garden: A Practical Guide,” the book’s opening piece presents itself as a serious introduction to the Jewish burial tradition, only to be undermined by the hilarious interruptions that would not be out of place as the tagline of a New Yorker cartoon or a Sarah Silverman takedown:

In addition, the topic of carcass conflagration may be bantered about by simply irreverent persons (case in point: a dying father who—when asked about his wishes—was fond of saying, ‘Dead is dead’ and ‘Who gives a crap?’—though near the end he reminded his adult daughter about the existence of a cemetery plot he ‘paid good money for’ and in truth, had absolutely no inclinations toward a final end anyway).

Ryder is determined to rescue authenticity from the cult of sadness compelling her to mourn her father’s death according to tradition or social expectation. Fictive Pamela is more than her comic foil; she is also the dream self she frees to explore personal experience with a map drawn by memory.

In the title story, Fictive Pamela becomes a little girl trying to track her absent father as he crisscrosses the country as a traveling salesman. In “The Renoir Put Straight,” a family idyll in France is interrupted by the appearance of a snake. Ryder’s relationship to place situates metaphysical disturbance in the void between the hand and the map. Her characters operate in a perpetual state of removal from the imagined destination.

For her father, the displacement is the places he flies over, once airfields during his WWII fighter pilot days, now transformed into market territories. For Pamela, the father who soared through the air is never the person she touches. He is the occasional voice of a long-distance call, excitedly updating her on his current coordinates and weather conditions. The only evidence of his existence is the scrawled postcard that arrives weeks after he has returned from one trip or already left for another.

In “As Those Who Know the Dead Will Do,” the search for idealized place becomes a father-daughter journey to locate an old airfield along the edge of a desert cliff. “Irregulars” shows the struggle of an aging business owner. His hands that had reclaimed so many oddly formed clothes fail to stitch his own garment. The exit from his final attempt becomes a stroll across a battlefield we all must face:

And so we walked out—out through the remains of it, the wreck of it—stepping over the broken glass from broken windows, the papers scattered all around: yellowing invoices, unpaid bills.

Paradise Field rewires Proust for an age that has turned the approach of mortality into a data-driven revenue stream. Like a poetic 21st century Jessica Mitford, whose The American Way of Death exposed the profiteering of the funeral industry in the early 1960s, Ryder pivots toward the fantastical in the latter half of the book. Her subversion combines journalistic detail with magical realism.

“Somewhere in the North Atlantic” finds her father’s crash-landed in a hospital bed in his living room. He is alone with sanitized wipes and bell for summoning assistance; “except for the current company of the navigator out front and the top turret gunner at the headboard…” Fictive Pamela, now unmarried and middle-aged, is Ryder’s Other seeking to restore mystery to the center of the experience.

Readers race alongside the narrator as the book gathers speed for its final flight. “Mitzvah,” “Recognizable Constellations and Familiar Objects of the Night Sky in Early Spring,” and “Jerusalem” chronicle her father’s journey into the air that once held him as a young man. Their secret hero is a fellow patient: “Hirshbine, Gabriel or Hirshbine, Pincus.” For Fictive Pamela, he is true to the Christian implication of his given name, as well as its Hebraic alternate, which translates as “oracle; mouth of brass.”

The tradition that was resisted in the book’s opening pages is restored in a stooped embrace. Gabriel (Pincus) is macher and cigar-smoking Absurdist—of the Groucho variety. He procures gefilte fish and horseradish for Pamela’s father. He bounces around the unit, a ubiquitous presence that eases transport for all. He seems to know what everyone needs, Fictive Pamela especially. When he lights the Shabbos candles in the Visitor Lounge, hair combed, prayer shawl draped across his shoulders, he highlights a path for a daughter weary in her own journey.

Readers who have traveled with the protagonist receive a similar mitzvah. In “Other Hemispheres,” the book’s closing story, the soil that tumbles into the grave suggests the words on the page, filling the heart. Paradise Field is a remarkable addition to grief literature, a book that soars in a “shovelful of loam.”

William Lessard has writing that has appeared or is forthcoming in McSweeney’s, FANZINE, Prelude, Hyperallergic, PANK, glitterMOB. His work has also been featured at MoMA PS1.