“Once upon a time there lived a bird and then that bird stopped living.”

The straight-forward narrative of the Ivory billed woodpecker is the first line B.J. Hollars’ Flock Together: A Love Affair with Extinct Birds, but this is more than a book about a bird. Hollars leads us through museum collections, Christmas Bird Counts, and the records of naturalists in search of the “Lord God Bird.” This is a story about obsessions, consumption, and guilt, drawing us into the world of those who chase ghosts in hopes that, next time, we can do better.

B.J. Hollars is the author of several books, most recently Flock Together, From the Mouths of Dogs: What Our Pets Teach Us About Life, Death, and Being Human, as well as a collection of essays, This Is Only A Test. Additionally, he has also written Thirteen Loops: Race, Violence and the Last Lynching in America, Opening the Doors: The Desegregation of the University of Alabama and the Fight for Civil Rights in Tuscaloosa, Dispatches from the Drownings: Reporting the Fiction of Nonfiction, and Sightings. In spring of 2018, his latest work, The Road South: Personal Stories of the Freedom Riders, will be published. Hollars serves as a mentor for Creative Nonfiction, and the founder and executive director of the Chippewa Valley Writers Guild. An associate professor of English at the University of Wisconsin-Eau Claire, he lives a simple existence with his wife, their children, and their dog.


It seems like there’s a growing interest in birding as a pastime. In the past decade there’s been dozens of books published on the subject (and even a few movies). What do you think it is about birds and bird watching that inspires so much content? What do you think you might bring as a newer birder that someone who’s been in the pastime for many years might not?

I think in the not-too-distant past there’s been this perception that birding is for retired people who like to tromp around the woods a little bit without having to tromp around too much. And a lot of folks probably felt like they didn’t fit that stereotype. It’s an unfair stereotype, of course, and one that may have limited other people’s interest in birding. But with the advent of bird apps on phones and, as you said, the renaissance of birding depictions on the silver screen (The Big Year, A Birder’s Guide to Everything, March of the Penguins, etc.), it seems that a younger generation has taken an interest.

But for me, it’s actually about getting away from the phone apps and the movies. It’s a form of meditation. It’s a good excuse to tromp around the woods for as little—or as much—as I want. You never know what you’ll see, but as long as you look, you’ll see something.

One of the things I was struck by was the impact of place, of habitat, not only on birds, but on people. Wisconsin has a history of inspiring men into considering the natural world, from Aldo Leopold, to James Newman Clark, to Francis Zirrer. What is it about the Wisconsin landscape in particular inspires naturalists and writers such as yourself?

You know, I probably haven’t been here long enough myself to know for sure. This is my sixth year in Wisconsin, and in that time, I’ve tried to do my own personal ethnographic study of the people here. What I’ve learned is a.) we really do love cheese b.) we really, really love the Packers and c.) we love to spend time outdoors. I imagine the latter observation is the result of having a lot of outdoors to choose from. Here, the woods are everywhere. And I can see the Chippewa River from my office. We’ve got bike paths and state parks and public lands to occupy, and though funding has sadly been cut for all three, I don’t think Wisconsinites are going to stand for it.

Perhaps, too, we’re all a little inspired by those environmental giants who’ve come before. You’ve noted a great list above, but you forgot John Muir, one of our most noted nineteenth century naturalists. And don’t forget our former governor, Gaylord Nelson, the founder of Earth Day. The point is, we pride ourselves in our environmental tradition. And even if that tradition feels a little shakier than it once was, I like to think that the people of this state remain as committed as ever to the natural world.

A few months back I had the chance to visit Aldo Leopold’s shack. And just being there—amid the silence, and with knowledge of what events transpired there—I was deeply moved. These naturalists and environmentalists of the past touched our lives, but they continue to touch our lives, too. Especially through their writing. It’s my greatest hope that my own humble words might make a difference to a few folks, too. 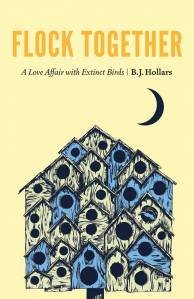 I think the biggest thing I took away from the book was a feeling of both responsibility and mourning, but hope that we can learn and do better. How did you balance these two conflicting ideas throughout the course of your book?

I tried to balance them in the book the same way I balance them in my life: by using one to inspire the other. The more we’re able to understand the birds we’ve lost and keep losing, the more we’re willing to try to spare other birds from a similar fate. As my birding mentor taught me, we care about birds a lot more when we know them by name and by call. The first step in taking responsibility for the fate of birds is to get to know them. The same is true for our natural world, too. If you can learn the names of the trees in your backyard, then you’ll be able to utilize that knowledge beyond your backyard. Maybe you’ll be taking a walk in the woods one day with a friend, and you’ll say, “That’s a maple.” Now, you’ve taught that person, too. And thanks to your knowledge, maybe that person will now have a vested interest in maple trees as well. For me, it all boils down to empathy. We care about the things we love. But how can we love anything unless we get to know them?

The readers (okay, me) are dying to know. What is your favorite non-extinct bird?

I’m a simple guy with simple tastes, so I love my backyard birds. Probably my favorite is the Pileated woodpecker. They’re not quite the Ivory billed woodpecker, but they’re not that far off, either. And when one comes swooping through the sky to rattle my bird feeder, I can’t help but smile. Can’t help but imagine, too, what it’s doppelganger—the Ivory billed—might’ve looked like in that position had it survived.

I’m just wrapping up a new civil rights book titled The Road South: Personal Stories of the Freedom Riders. In short, two summers ago I retraced portions of the 1961 Freedom Rides route by car, stopping along the way to chat with as many of the original Riders as I could. I learned their lessons, listened to their stories, and tried to offer intimate portraits of people who I view as American heroes. In light of recent events involving race, I’m more ready than ever to share their stories. Frankly, I think we need their stories.

It’s a long way from birds, I know, but this story’s also rooted in empathy. If we take the time to care we will care. If we choose not to, there’s moral price to be paid.

Ashely Adams is currently an MFA candidate at University of South Florida. She has an MA from Northern Michigan University, a BS in Fisheries and Wildlife from Michigan State University, and has been previously published in Rum Punch Press, Foliate Oak Literary Magazine, Permafrost, Flyway, and Anthropoid.