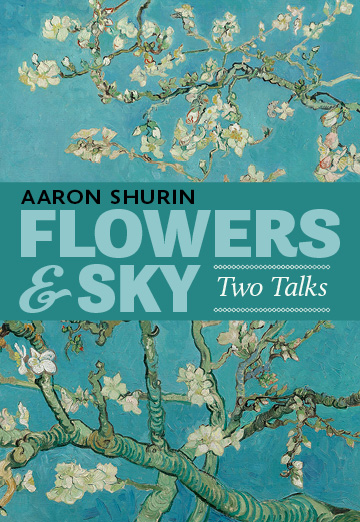 Every poet is unconsciously dominated by particularities. There is a moment in the writing life of most when they come to realize not just their habits or style but also obsessions and predilections. It is a moment when a writer sees their work from the outside. Often, this will lead to self-imitation or, to put it perhaps less injuriously, branding of oneself. However, writers who are not just skilled but nuanced routinely seize on this moment to either switch course or create intensely interrogatory works.

The latter is what we see in Aaron Shurin’s Flowers & Sky. This slim volume consists of two lectures delivered in 2016 as well as a sampling of prose poetry meant to illustrate the points within the talks. In his preface, Shurin focuses not so much our attention but his own on the two metaphors serving him as “a governing image.”

In his first talk, we’re presented with a meditation on flowers couched through a reading of Oberon’s flower soliloquy in A Midsummer Night’s Dream. Although the talk will definitely appeal to Shakespeare lovers, it is not esoterica. Rather, Shurin shows how his mind found in the image of the Flower a means of grasping metaphoric, “the soliloquy itself were a waking dream into which one fell into full seeming.” This entry initiates the poetic move, but one that was Shurin now realizes incomplete: “The flowers were their names, and they bloomed as sonic text, not visual image. They were bursting nodes in a sound pattern, auditory evocations in the service of an elaborate music of transformations, by which the players—the readers and the spectators—might come to participate in the enchantment of love.” It was this soliloquy where he learned “taxonomy and identification, the knowledge of their attributes, the ability to name their names, was part of a poet’s duty. As in most things poetic, the goal was to pay attention.” Shurin then gives a map of some of his lived experiences with this “governing image” demonstrating how his poetic manifested itself as poetry once he paid attention to the world in was immersed.

Once he has given us his flowers of the field talk, Shurin raises his head skyward. It is a wonderfully balanced maneuver giving us a parallel of particular with universal, a membrane every poet attempts to traverse. In this second talk, Shurin reveals to us his discovery of his use of the trope of Sky: “I was chagrined by the possibility of my sloppy oversight, or, conversely, of my now-naked linguistic obsession.” Rather than recoil, he steers into the curve focusing his attention not just on what he intended but how the connotations created an aesthetic vein. For Shurin, Sky “is a cipher for the blank page up there, and as such invites inscription—thus my continuing attempts at entering its overarching domain, at invoking through metaphor or measure the immeasurable.” When paired with the lessons learned from Flower, we come to see Shurin has created a body of work sparked by the low and inspired by the high in a kind of feedback loop or Mobius always spiraling more and more poetic thought.

In “Still Walking,” Shurin gives us just this psychological critique as he blends his governing images into a wonderfully lyrical prose poem:

Look at the sky: it reeks of projection. Look at my eyes: they’re tools of the sky. Look at my feet: still walking. “Which way are you walking?” Ask the birds. “What are you singing?” A walk-along song. “How does it go?” Bird, dome, pink, breeze … / mind-light in the alphabet trees … And more like that … Look at my smile: it goes up to the right. Is that my sly inflection, a mark of selection, the pitch of glory, the angle of erection? “All that, but rhymier.” I watch a man who brought a bouquet; pleasure made him wiggle as he walked away. He swished unawares; the peonies winked and smiled to the right. “What was he singing?” A wiggling song. “How did it go?” Back and forth. “Ah, the world’s a state.” Look at the page.

The kind of self-exegesis done in Flowers & Sky can often fall flat as readers may not be familiar with a writer’s work or the writer themselves may be simply too self-aggrandizing. Fortunately, Shurin keeps his focus on the revelations in each “governing image” using his work as mere illustration (thus the selection of prose poems included with the two talks). At once literary criticism and memoir, Flowers & Sky gives cutting insight into the poetic process illuminating for readers and writers alike.

Daniel Casey has an MFA in Creative Writing from the University of Notre Dame. He tweets as @misanthropester and writes at misanthropester.com. He lives in Murray, Kentucky.