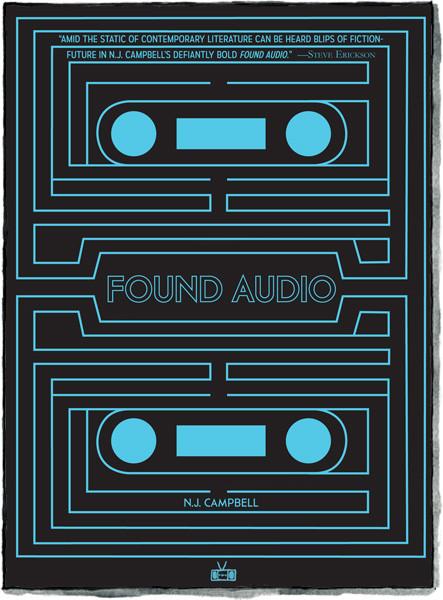 N.J. Campbell’s Found Audio is the new Pandora’s Box of weird contemporary fiction. It forces the reader to grapple the very reason they are reading this slim but dense novel. It begs to be read. It questions itself. It haunts us. Most importantly, however, it makes the reader think about the very thin line between reality and fiction. This is a story that is about exploration, about control—this is a novel about the traps we create when we justify the unknown.

The novel is presented as a manuscript detailing the notes of three transcripts of mysterious audio. The footnotes aren’t distracting like David Foster Wallace’s Infinite Jest, nor do they grow into something uncontrollable like Mark Danielewski’s House of Leaves. They are a sort of mutation though, and Campbell sprinkles them throughout the text precisely when needed and wanted. The text is Campbell’s until it’s not. It’s actually notes of Amrapali Anna Singh of several audio tapes given to him by a mysterious man, and the narrator of the tapes is a journalist that is now lost in the winds of time and memory. In under a hundred and fifty pages, the reader will feel hungry for more. While this might normally be meant as a negative criticism, Campbell is able to make us full with narrative mystery.

Layers after layers, the reader is exposed to a rather simple story—a journalist hungry for answers, searches the world for the meaning of memory and time. In the process, they see the very act unfold as Singh tries to search the audio tapes for meaning. This is a novel dying to fight back against the expectations of the reader. Singh even helps with this grand deception: “Their names seem to be vacuums without digital footprints. Again, this lends itself to the following account being fiction—making this whole thing an elaborate charade. However, I am convinced that it is not, and that the events described within this document are not only real, but also something more than real can be.” By asking the big questions, Campbell is allowing the reader to find the small but personally significant answers.

Just when the novel seems hindered by a poetic but timid plot, we are introduced to a potential reason for the recordings. The journalist isn’t giving a narrative willingly, at least by himself. There seems to be a reason—a very dark yet similarly powerful Jeff VanderMeer Southern Reach kind of reason—for the conversation to take place in the manner that it does. Like VanderMeer’s stunning trilogy, Campbell captures the darkness of the unknown; by giving us the tip of the iceberg, the author forces the well-read to think for the absolute worst: “Everyone was just another passenger making the best of a runaway train headed for the edge of an abyss. When all bets are off, it does strange things to the mind.” We are those passengers and Campbell is guiding the runaway train.

The true power of this novel is what we bring to the reading, “Humans make meaning, they said. Humans dream. Therefore, humans make meaning out of dreams.” We want there to be an elaborate worldwide conspiracy behind this story because we fear there very well might be. We want to be entertained, to be questioned, to be haunted. Reading fiction requires us to make the jump between reality and fiction, Campbell’s Found Audio makes us wonder why we make that jump in the first place.

Nick Sweeney lives in Lindenhurst, New York. He is allergic to dogs and chocolate and yes, he knows how terrible it must be.