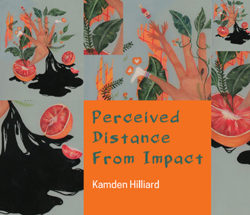 It’s safe to say that the most revelatory work in contemporary poetry is at the hands of Black queers & femmes: Rachel Eliza Griffiths, Angel Nafis, Jamila Woods, Jayson P. Smith, and bright among these, Kamden Hilliard. Kam edits Jellyfish and Big Lucks, two poetic institutions working hard to make room for marginalized writers. Having Kam as the gatekeeper here is a blessing; they bring in the fresh stuff because they know what it looks like, what it is.

Full disclosure: I found Kam on Twitter after reading some of their (abundant) work online, and swiftly became a rapt fan and cheerleader. Twitter has become a rich place for poets, and Hilliard’s spot-on and oft-salty voice appears in all the genres they write it.

Kam sees a world the rest of us cannot, and they form it, whole and sparking, out of an empty page. A babe-about-town in poetry world, Hilliard isn’t afraid of the touchy landscapes of gender and digital language. In fact, their fluency with new language, so smooth that I sometimes can’t tell if they’ve made up an entirely new word, is exhilarating, a marker of a newness their whole body of work encompasses. In short, it’s extremely dope.

The whole book is rich, but a few pieces stand out: “Hair Salon: A Catalogue in Seven,” written after Terrance Hayes, parallels the speaker’s “failure … of black manliness” and chronicles instead a liminal space of gender and grooming, self-care the speaker presents as natural, even habitual. For the speaker, hair becomes a space to trade beauty tips, a circumventing of the masculine barber shop and formulating their own “counter offer,” where traumas have piled up but everyone’s hair looks really nice.

Kam does some real work in this chap: their ability to get into a voice of cool babe who notices stuff the rest of us are too busy being anxious over to pay close attention to. But Hilliard is not withdrawn or misanthropic, as a lot of contemporary poetry is leaning; they invite us in with their generous language, their open hand of lyricism and intricate nu-language.

Kam also does punctuation fabulously: “read: my trauma!” in their elegy against normalizing white supremacy in the classroom, “Early Amerikkkan Cinema [Pt. Two].” If you don’t get why we should all be holding space for Black queers to write from trauma, from the erasure of the legacies of violence, of how (some of) white America just woke up to what Black artists have been grieving for generations, maybe you won’t like this piece; it calls us out, us lefty whites, how we feel entitled to require knowledge of our cultural touchstones and are shook when they are unmasked as problematic.

Also from “Early Amerikkkan …”: the speaker is “thick on sunshine [quietly cherishing my invisibility].” While I cherish Hilliard’s visibility, their admission of a secret desire to vanish, a place to escape from the omnipresence of whiteness’s entrenched placement as neutral and of their own constant “two-ness” as Black and queer, creates a moment of vulnerability scary to much of contemporary poetry by white writers.

Hilliard doesn’t shy from their feelings on living in a white supremacist world, which are abundant; they shoulder “the unwelcome wrinkle / of trauma,” but they show up and gleam unwrinkled. While white poets construct a world where we’re by turns hyper-vulnerable, deeply anxious, and impenetrably aloof, Hilliard and other queer writers of color crack open the one-dimensionality of Stuart Hall’s “burden of authenticity” that white-dominated literary culture still demands, especially of Black writers. Hilliard demands to be complicated: human and digital; poet and critic (their tweets about undergraduate lit courses are simultaneously hilarious and astute).

Kam is also unafraid of the successes of other writers, consistently shouting out important work by and opportunities for young queer writers of color in particular. This echoes the ethos of abundance in Kam’s poetics: white gatekeepers have had the floor for literal centuries, and centering Black and queer voices is morally and artistically mandatory.

Perceived Distance from Impact’s press, Black Lawrence, has proven they’re unafraid of the new; between Hilliard’s chap, work by Caroline Cabrera and sam sax (who also lends a spirited blurb), Black Lawrence is proving itself capable of carrying the torch of gatekeeper working to carve and hold space for writers who deserve center stage.

Jesse Rice-Evans is a queer Southern poet and essayist. Her work has appeared in Entropy, Public Pool, Yes, Poetry, and in her chapbook Soft Switch, out from Damaged Goods Press. She teaches writing at the City College of New York and the Cooper Union, and tries to do reiki on her cats.