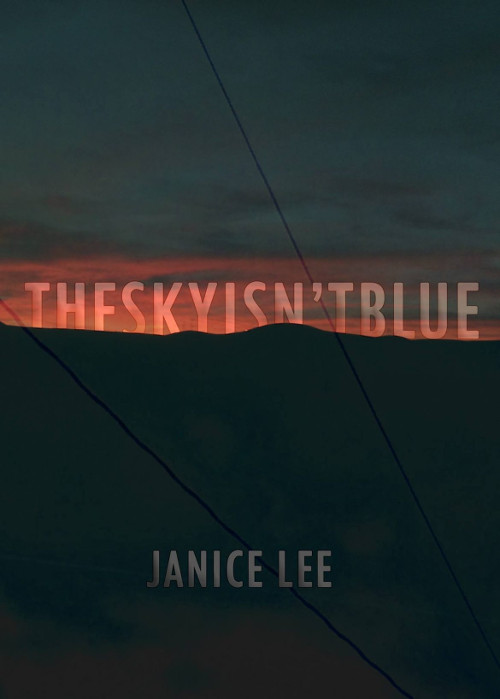 I used to annoy my sister by insisting that the sky was white and the clouds were blue. It annoyed her because she knew the sky was blue, everyone knows the sky is blue, even if you’re blind you know it. If she hadn’t been so certain, she wouldn’t have been annoyed. If she hadn’t been so certain, she might have considered the truth of what I was saying. In The Book of Repulsive Women, Carrie Lorig writes, “If no one tells you the sky is blue, you might call it white.” I’m looking at the sky right now and it is grey from horizon to horizon. It’s probably a different colour where you are as you read this. Maybe pink, maybe black.

The Sky Isn’t Blue is the perfect title for Janice Lee’s book of essays on the poetics of spaces because she is not writing about place, she is writing about the experience of place (“The poetics of spaces is the poetics of bodies in spaces”). She is using language to discuss the limitations of language. She is putting words on the page which have specific meanings to her but may not mean a thing to the reader, or perhaps words that appeared in her mind during a specific moment, in a specific place, and are significant for that reason rather than because of any particular meaning they hold on their own.

At points, the essays read like diary entries, notes jotted in real-time while Lee was in these spaces. At other points, they are excerpts from her journal and sometimes these excerpts are more accessible than the rest of the prose. Most of the time, I enjoyed the leaps of thought and fragmentary language, but occasionally I found myself wishing I had more to hold onto. “Soliciting a nearness that can only tether itself to texture” didn’t mean anything to me. But these moments of confusion didn’t prevent Lee from creating and recreating spaces within her essays, spaces that I had my own experiences of. When she wrote about the Salton Sea, I imagined a desert, maybe you would picture an alien planet.

I know that the sky is blue but when I look up at night that isn’t what I experience. Sometimes what we know cannot explain what we feel.

Often, I don’t think in words. I find myself stirred from deep thought but when I go to articulate what I’ve been thinking it is impossible to translate it into language. It’s not that I think in images or sounds instead. This is a kind of unsymbolised, unconstrained thought. I suppose it all boils down to electro-chemical reactions in the end but it’s not the easiest material to work with when you’re a writer.

While reading The Sky Isn’t Blue, I wondered whether Janice Lee thinks in words. Throughout the collection, she keeps coming back to the failures and limitations of language (“Forget the words. Just forget all the words for a moment. Because all of the words are utterly limitless and limited.”). In the essay “Mornings In Bed” she explains how in her earlier book Damnation she “started to write about the preciseness of language and the momentum of sentences in a way that [she] hadn’t cared about before,” how “with Damnation, [her] relationship with language changed,” and how after completing the book she fell into a “10-month long writer’s block.”

Much of The Sky Isn’t Blue seems to deal with that period of Lee’s life and how she pulled herself out it. The book is saturated in loss and heartbreak, they seem to be Lee’s constant companions, but there are also moments of pure love, strong and shining. Perhaps it is because Lee is approaching these enormous concepts that language is failing her. There is no simple way to communicate trauma or ecstasy, and Lee isn’t content to use small, specific examples as symbols to represent the whole. A moment can’t stand in for eternity. The words “I love you” can’t communicate the entirety of the feeling behind them. So the language crumbles around her.

And yet she wrote the book. Because not only does Lee point out the limitations of language, she also reinforces its importance. In “Night Sky,” she writes, “When you consider the possibilities of writing and language, well, you might as well consider the possibilities of the entire universe.” Language only fails because of its limitless nature. If there were only one thousand or one hundred or even just ten words to choose from, maybe then it would be easier to communicate what we’re feeling.

Caro and I often disagree about what colour things are. She says my shorts are green, I think they’re blue. We both have different opinions on what colour that car that just drove by was. We even took a test online to find out who is better at identifying colours. We both got the exact same score. To me, this is proof that there is no singular correct perspective. Just because two people see something differently doesn’t mean one of them is wrong, just that they’re coming at it from a different perspective.

The Sky Isn’t Blue is an intelligent book. Janice Lee is an intelligent writer. I don’t think I’m as intelligent as either of them. Reading this book, I couldn’t help but feel that I would be getting more out of it if I had a more powerful intellect. And yet, I got so much out of it anyway. Who wouldn’t get something out of lines like “Close your eyes and remember what the birds looked like before. Repeat the words that describe the birds over and over again. Without the words, the birds still persist. Without the words, the birds still matter.” Those are lines that jump out from the rest of the text, powerful by themselves as well as when they’re a part of the whole. There is also a lot to be gained by sinking into the book and letting the mood and feelings of the text engulf you.

This review doesn’t work as an objective assessment of the book, because I don’t believe any two people could read this book and take the same things from it. It’s like a Rorschach test, or a mirror, it shows everyone something different. We’re all looking up at the same cloud, but each of us sees a different shape.