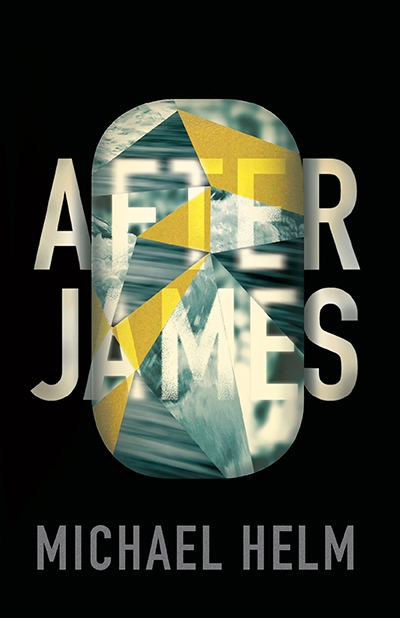 “The story seemed to confirm the existence of a thing not yet named, like an invisible planet postulated through math, the evidence of bending light, gravitational forces.” The pleasure of Michael Helm’s After James stems from how theory works in modern science. Currently, scientists don’t have to see to believe. Einstein couldn’t test his theories of relativity, but he was certain they were true. For scientists, faith in formulas allows them to believe with great certainty in unobservable objects—like an invisible planet. To a certain extent, this represents the modern scientific paradigm. Helm challenges his reader to join physicists in this line of thinking by rejecting classical physics, questioning metaphysical assumptions, and dumping psychological realism.

In Fiction in the Quantum Universe, literary theorist Susan Strehle coined the term “actualism” to describe postmodern literature shaped by new physics, which includes the theory of relativity, quantum mechanics, and wave mechanics. Robert Coover’s The Public Burning, William Gaddis’ JR, and Margret Atwood’s Cat’s Eyes are a few examples of texts she examines. Strehle argues that these authors borrow ideas from new physics to create innovative texts that fall outside of realism. Actualism and new physics explain some of the poetic and narrative elements of After James. By adopting this new metaphysical paradigm, Helm taps into a distinct poetic voice and approach to narrative structure.

Einstein’s special theory of relativity has shaped our understanding of the relationship between frames of reference and measurements. This notion of frames plays out in Part I of After James, which focuses on the character Alice escaping her job at a pharmaceutical company in Vancouver. One of her trial patients disappears and commits suicide. Alice believes this is a result of Alph, the drug being tested in the trial. Feeling responsible for the death and wanting to ensure that no one else will suffer, Alice steals the formula and escapes to an unnamed location where she rents a house from the Dahl’s, a couple who are spending a year in West Africa doing service work.

Alone at the rented house, she consumes a tablet of Alph for the first time. The pill supposedly boosts creativity. During this time, she discovers messages from Denise Dahl regarding Clayton Shoad, who lives down the road. The message warns Alice to stay clear of him because he may have killed his mail-order bride. Later, when a flood threatens to destroy the Dahl’s home, Clayton arrives and offers Alice sanctuary. She reluctantly accepts his assistance. Safe from the flood, Clayton describes Denise as a mentally ill woman. Who should Alice believe? Denise or Clayton? In this situation, where she is without grounded reference points, objectivity becomes impossible. Or is it all a hallucination inspired by Alph? Is Alice simply an unreliable narrator? Are we the reader without reference points? This is actualism dramatized. Helm produces a sense of uncertainty that turns our mind on itself, resulting in a gothic nightmare similar to Henry James’ The Turn of the Screw.

Heisenberg’s uncertainty principle plays out in Part II of the After James. This principle claims that subatomic reality changes as a result of observation. The presence of an observer becomes a factor in the experiment, making scientific neutrality impossible. Helm applies this principle to his characters. In the Part II, a failed poet named James is hired by August Durant to study a mysterious writer called “The Poet,” who has created a website with a cult-like following. Here James is paid to search for clues in the poems regarding the disappearance of Durant’s daughter. But it is unclear if the cryptic poems hold any propositional value. As the chapter progresses, the closer James gets to The Poet, the closer The Poet gets to James. The uncertainty principle becomes a technique for increasing the tension like that of a plot in a mystery novel.

Throughout the book, Helm uses language games to destabilize our understanding of things. As a result of this undermining, we are forced to look to relations and motions—a central principle of new physics. Strehle claims, “With its roots not in things but in acts, relations, and motions, actualism describes a literature that abandons the old mechanistic reality without losing interest in the external world.” For example, in Part I there is a character called Alice, and in Part III there is a character called Celia. These names are anagrams. Just as molecules are made of atoms, words consist of letter. This playful disassembling and reassembling of names is an example of how Helm applies new physics to the language of the novel. But what is the exact connection between the characters? Uncertain. On the level of language, characters dissolve into a collective where the distinction between this and that blurs. The reader can’t help but question the relation between parts and the whole—as if pointing to a reality that exists but that can’t be directly experienced or fully understood.

Another example of such language games is the pun “Pharma con,” located in a line of poetry. In the context of the poem, it is a “con” by the pharmaceutical industry. But it also relates to the Greek word pharmakon, meaning either remedy or poison—an ambiguous term used to describe Alph. Helm makes this pun explicit. But later the reader comes across the line: “Camus is sumac spelled backwards.” Not only is this an anagram, in this case a palindrome, but there is a type of sumac which is poisonous—tying it to the definition of pharmakon. This connection was not directly pointed out by the author. Throughout the book, Helm uses language games to bring attention to relations and creates an inclusive and playful feel to the text.

Structurally the book consists of three parts that appear to be indirectly tied together. What is the connection between the poet in Part I and the poet in Part II? What about James from Part II and James from Part III? These loose binds creates uncertainty but not confusion. These connections sharpen the readers’ senses. We notice the relations and attempt to piece the narrative together like a giant puzzle. The ambiguity and language games make pinning down a single and clear answer impossible. This literary technique defamiliarizes our expectations, forcing us to hypothesize about the text without ever locking down an exact meaning. That’s actualism. That’s new physics. This is the world we live in. We want a unified string theory that explains everything, but we don’t have it. We are anxiously searching for clues to solve the mystery of this book—as well as the universe.

While one might blow this off as nothing more than a thought experiment, I’d argue that writing like this is the only way to accurately represent our lives at this moment in time. New physics is almost a hundred years old, yet most people are unaware of it and how it has shaped our understanding of reality. But almost everyone in the developed world is aware of how the digital revolution has changed our daily lives. In many ways these scientific shifts run parallel. Our behavior has been manipulated by the digital presence of others. Social media and smart phones offer all the opportunity to constantly watch each other, study each other, and stalk each other. Lies can easily be disseminated and accepted as facts through social media. Relativity and uncertainty define our metaphysical construction of reality whether we acknowledge it or not. We are all participating in a game similar to what Helm describes in this novel. His approach to style foregrounds such elements and forces the reader to second guess our assumptions of reality and focus on the invisible strings that tie our understanding of the world.

Jacob Singer’s writing can be found at Electric Literature, The Collagist, and Colorado Review. He recently finished writing a picaresque novel inspired by corporate conspiracies, punk rock, and video games. He is in search of a publisher and can be found on Twitter @jacobcsinger.