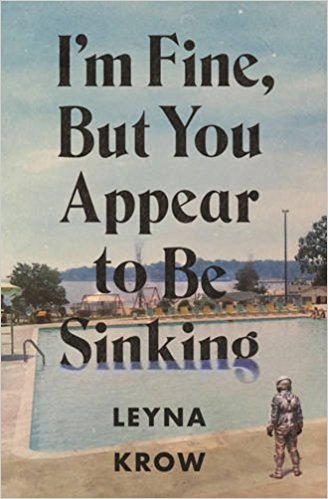 If ever “reading” was to be considered a solitary enterprise, one is ironically sure to be acquainted with a fair few lonesome characters in Leyna Krow’s short story collection, I’m Fine, but You Appear to Be Sinking, published by Featherproof Books.

An ominous sense of abandonment abounds throughout the stories, and the reader is immersed into various worlds in which the domestic meets the fantastical. Such experiences present themselves most often during episodes of severe loneliness on behalf of the characters, and it becomes clear that when one only has oneself to refer back to in order to substantiate a sense of reality, any grasp of the “real” becomes somewhat unhinged. Tigers in backyards, unidentified creatures adopted as pets, mysterious squids appearing on seashores, secretive buttons pressed in Detroit factories. All such instances that appear throughout this collection are on the whole faced by characters who live in lonely or insulated worlds, a context that bears heavily on their ability to distinguish the real from the unreal. It is thus at the crossroads of solitariness and reality that Leyna Krow’s narrative tract takes its leave.

“Spud & Spud II” is a story fractured into seven parts throughout the collection and it tells of a human clone genetically reproduced from an astronaut. The theme of loneliness emerges unambiguously between these pages, not only from the perspective of the astronaut, who himself eventually becomes lost in space, but also from the viewpoint of “Spud,” the cloned boy: “he feels overwhelmed in his loneliness / fuck the interconnectedness of all things. If it were true, he could not possibly feel so lonesome. / Everyone is isolated.” Such perspectives emerge when Spud becomes aware of his true genealogy. In this sense, temperaments are wholly reactive rather than intrinsically applied, and the sense of loneliness that manifests here is attributed to the domain of the family, or the lack thereof.

Along the axis of familial dynamics, “Tiger, Tiger” accounts the “comings and goings of secular life,” amid the provincial Americana of an insular and highly domesticated town, where “an aerial view must look like somebody puked up monopoly pieces.” It’s a tale in which stock characters say things like, “Come by after church and we’ll put on a little spread.” Such citations contribute to the formatting of a prosaic environment that comes to function as a paradoxical undercurrent to the subsequent brouhaha of the storyline. A family of rednecks, “The Rolsons” are suspected of harboring an exotic animal in their backyard. There is a subplot to the narrative in which one of the suspecting couples of the community, Mark and Jenny, have recently experienced a miscarriage. Their cat goes missing. Mark and Jenny speculate anxiously over its whereabouts. Mark makes an insensitive proclamation, “It’s a good thing we don’t have little kids running around to worry about,” and suddenly the search becomes more about the composition of familial structures and the phenomena of loss than it does about Boomer, the missing cat. Mark’s search eventually leads him to the Rolson household (referred to him as The Rolson Meth Lab), and it is here in which Krow’s finesse for scenography is striking and not without a figurative potency, “there’s a TV, a flimsy coffee table, and a bookshelf filled with a variety of items that aren’t books. Plastic cans, matchbox cars, a socket wrench, an empty pastry box.” Further, Krow’s dexterity in drawing on emblematic objects to format scene is also demonstrated during Mark’s dèrive into the backyard where he sees “rusted pop cans, some scattered haphazardly, others standing in a row like a miniature fence in front of a neglected lawn mower.” Mark eventually finds his cat, but the mysterious creature being kept in the Rolson’s yard remains unidentified. That which endures from “Tiger, Tiger” is the sense of a bifurcation between civility and incivility. It is not only a suspicion of incivility that the local community has of the Rolsons, but a fear of incivility. Fear of an invasion into the stable nuclear familial environment that threatens the neat sociological construct of the community. The Rolson family and their unidentified creature are the force that ever teeters on the edge of sabotaging the immaculate yet mildly sinister fantasy of bucolic societies. They are the nightmare to America’s dream.

Perhaps the most interesting and challenging story on both a stylistic and thematic level in the collection is “End Times.” It is here in which Krow presents to us various conceptions about time and space that appear largely unique to this story. The narrator, a deceased mother and wife, has the ability to remember exact dates and times for impending apocalyptic events. These events have repeated themselves ad infinitum in a world where “the universe is stuck in a never-ending loop of creating and destroying itself,” of which any elementary student of western philosophy would appreciate as markedly Nietzschean. With the application of footnotes made to references in the body of the text, the reader is flung between different time zones and spatial dimensions as the narrative fluctuates between that which the woman has as a priori knowledge (which seems to be infinite), and the undercurrent to these events in which the woman recounts herself prophesizing over future occurrences across divergent partitions of time and space. Of course these recollections are not without a liberal dusting of pathos, as the narrator talks about a future of which she is not a part of after her passing. The story ends with a touching scene between the widowed husband, Aaron, and the son, Cole, delicately placing pebbles and rocks over a multitude of physical objects, symbolizing the desire to grasp onto a sense of stability in an uncertain world where everything is “in a constant state of flux.” “End Times” is an erudite and moving depiction on the themes of human loss and impermanence that essentially render us abandoned amid our own consignments to the eternal sanctuary, death.

Nonetheless it is of course possible to be profoundly abandoned in life, and the theme of loneliness in this respect reaches its apogee in “Disruption.” The story begins thus: “Each morning, a man in Detroit, Michigan pushes a button and everything falls out of my kitchen shelves and onto my kitchen floor.” The subplot offers the reader a degree of context in highlighting the narrator’s personal and mental plight as she suffers in the aftermath of the disappearance of her husband who is wanted in connection with a crime. Krow’s use of perspective is particularly adroit, as it only becomes clear to us that the woman could be suffering from a certain mental deficiency when she recounts her daily telephone conversations with a receptionist at an autoworkers union, of whom she calls as a means of identifying the individual “pressing the button.” The tone that Krow employs in the operator’s diction is subtlety indicative of a semi-patronizing conversation between an adult and a child, and the gesturing towards a mental insufficiency on behalf of the narrator is further buttressed when we learn that “on Tuesdays, the women from the church come over.” This is a woman who by no means is disabled, but she clearly is in receipt of a frame of mind not altogether conducive to her general wellbeing. It is never explicitly stated how exactly the food and assorted goods find themselves onto the narrator’s kitchen floor every morning, but the parallelism between this event and her psychological disposition is evident. The woman’s active pursuance of the notion that her kitchen shelves are flung open every morning due to a factory worker in Detroit pressing a random button, are attributed to her mental inadequacies of which appear to have been intensified by the fact that she finds herself in an exceedingly desolate situation. In this respect, “Disruption” explicates the gradual receding of any sense of an objective reality in a tragically lonely world.

Krow’s collection of short stories in I’m Fine, but You Appear to Be Sinking are highly personal portraits of fallible characters caught in uncompromising and undesirable situations. The frequent puncturing of the fantastical into the domestic are renderings of Krow’s own inquisition into the frontiers of reality. It is her intention to explicate how events that are conceivably possible should always be considered as veritable possibilities in any given context, and should not be discounted by those who are fortunate enough to possess the virtues of a sober mind. This is the central topos of the collection, and elsewhere Krow has referred to this as “fiction science.” I’m Fine, but You Appear to Be Sinking presents itself as fertile ground for sowing the seeds of this notion, and Krow does so with a tender tone, well-polished prose, fantastical imagery, and an undercurrent of tragedy that allow this collection to be read with compassion, curiosity, and apt insight into the lives of those who live in incredibly lonely worlds.

Samuel Stolton is an editor living in Bologna, Italy.