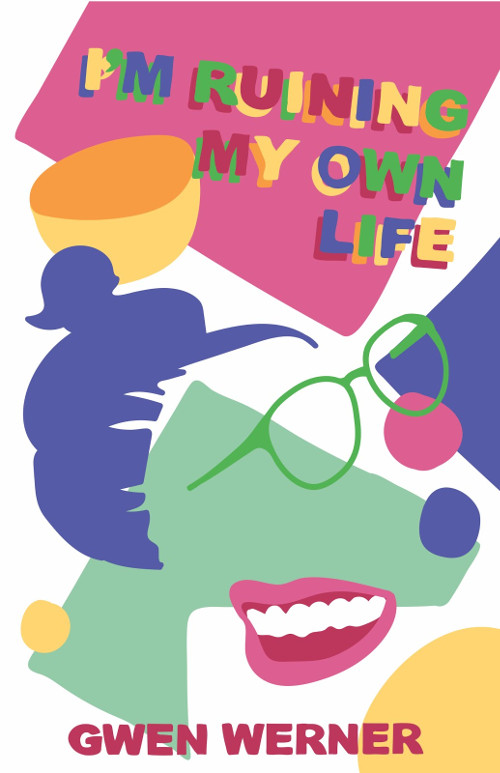 Gwen Werner gets me: anxieties about gender, sexuality; being a total nihilist but loving my nest anyway; trying to not be an awful straight-passing feminist; surviving, but barely. Werner stumbles through life, but her voice is unwavering: she might hate herself, but she knows how to shape a story, and, maybe most importantly in short-form writing, when to end it.

My copy of I’m Ruining My Own Life arrived in a nondescript envelope postmarked from Wisconsin, a place I imagine as grim and stark AF in March, despite climate change we’re feeling up-and-down the east coast. Decidedly lo-fi, Chelsea Martin’s weird digital portrait of a femme sliced-up colorblock captures something essential about Werner’s writing: a rueful joy that she labors to hide behind the traumas she alludes to but never fixates on, traumas that will register familiar to women and femme readers.

Werner pulls back a bit here, distancing her authorial self from the grim details of how younger-her faced trauma after trauma: slut-shaming, intimate partner violence, sexual assault. This distance feels familiar, and it stings. She questions her memories and justifies this with findings from “an article” about recollection, the drift of memory farther and farther. I think this is extra true for trauma survivors; we know how far we need to push things away from us if we are to survive them.

The titular essay opens grim and weird: Werner has “two brains, and one of them wants to kill [her],” as if death offers a kind of grim fame, recognition, that Werner seems to crave, but disallows herself from wallowing in too much. The following paragraph is nasty AF, a bit too much so for me to repeat here, but content warning: “shit and piss.” Being the Gross Girl™ that I am, I was thrilled. There’s stigma surrounding female nastiness: menstruation, Girls Don’t Poop, etc. It’s both empowering and disturbing to see the casualness of Werner’s interest in the abjectness of her body, her habits, her nails “bloody stumps,” as pointed out by the customer at the bar where she works.

I’m Ruining my Own Life is not all neurotic femme, though. Werner opens the collection with her contentious relationship to Jesus, to her fundamentalist Christian church, to bible camp and bible college; Werner instead wants “something to fistfight with,” something to rebel against. In this first essay, “Earthly and Immediate Causes,” she resists nesting, capital-g God, the notion that her identity should be with and through Christ. From an unknowable distance, Werner writes about the church as a sort of distant cousin, a relationship faded with time. No longer fraught and fucked up, but rather sort of caring, as if her Christianity was a mammal that startled her in the woods, a pest but a startling one, containing a kind of “magic.” Werner is convinced of this holiness, of writing her way into an identity that is hers, not articulated or prescribed by one of her “men who scare [her],” and she does not relent until she has written her way into this trance-like sublime.

I attended Catholic school until I grew prepubescent and oppositional beyond belief. Obsessed with aggression, I rolled my eyes in class, several inches taller than most of my teachers and haughty, snotty straight-A student desperate to rebel for real. Fuck Catholic school, skipping gym to smoke, spread my legs wide under tacky plaid A-line. The only stuff I liked was the suffering, the promise of death and how Catholicism embraces the gory aspects of Christian lore: stigmata, martyrdom, transubstantiation. Werner, too, is attracted to the “spookiness” inherent in Catholic stuff: old songs, creaky pews, dudes in opulent robes, eating and drinking Jesus.

Werner’s press, Passenger Side Books, is committed to this indecorous, aloof aesthetic. Prose chapbooks “made in a Wisconsin basement” embrace an abjection interested in its own absurdity. Werner tries to give us lots of new here: reclaimed fucked-up young womanhood, a Midwestern setting, her own bold voice. This lil’ chap is charged with the coolness and anguish of being a “gross girl,” and Werner pulls it off with grace and acuity.

Buy directly from Passenger Side Books

Jesse Rice-Evans is a queer Southern poet and essayist. Her work has appeared in Entropy, Public Pool, Yes, Poetry, and in her chapbook Soft Switch, out from Damaged Goods Press. She teaches writing at the City College of New York and the Cooper Union, and tries to do reiki on her cats.