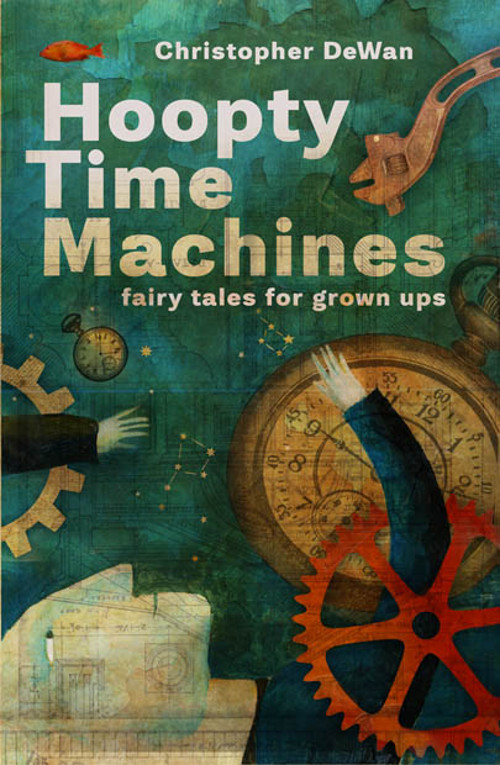 It’s very fitting that Christopher DeWan, the author if the new book Hoopty Time Machines, lives in Los Angeles. After all L.A., or La La Land as it’s also known, is the land of dreams and fairy tales. In his previous book, Working and Other Essays, there’s an essay in which DeWan references the permeability of the silver movie screen. On first glance, you would think that a movie screen is made from a solid sheet of vinyl, but if you were to examine it close up, you would see it actually has thousands of tiny pores which let it breathe like skin. In the context of the essay, DeWan writes about how you can see a person on the street and think they look like a character on TV or in the movies. In any other city, it’s probably just someone who looks like the character. But in L.A. it could very well actually be the actor who played the character. This means that in L.A., there’s the strange ability for the average citizen to travel from the everyday world into a fantasy world where they can see the avatars of their dreams walking down the street.

In his book Hoopty Time Machines, which is billed as “fairy tales for grown-ups,” DeWan often grounds his characters in a recognizable reality at the beginning of a story, only to transport them through the silver screen into the magical realm of dreams and fairy tales. In one such story, “The Interview,” the narrator is a man in an unnamed city looking for a job. He answers an ad in the newspaper and the office calls him in for an interview. But from there the story takes a sharp left turn from the ordinary into the extraordinary, as the man’s life is taken over by a tale from Greek mythology. In another story, “The Trolls,” a young man is driving with his new girlfriend to his parent’s house. The house in the country where his parents have retired, however, is far from the suburbs where he grew up. As soon as the man embarks down the driveway, he and his girlfriend find themselves in the territory of a Scandinavian folktale.

Another way DeWan playfully subverts the reader’s expectations is to transport classic fairy tales into the present. Instead of bringing elements of fairy tales into real life, he brings elements of real life into fairy tales. In “Rapunzel’s Tangles,” the author takes the reader into what happens after happily ever after. Once Rapunzel marries the thief who rescued her from the tower, the thief becomes a boring businessman named Mark, and Rapunzel becomes a bored housewife. Since her parents traded her to the witch for a handful of rampions, Rapunzel grows up having a strong disdain for the produce section in the grocery store. She also gripes about how terrible shopping is with her best friend Goldilocks, as one pair of shoes is too big, while another is too small, etc. In a savvy act of world-building, Goldilocks also gets her own story in the present, “Goldilocks and the Three Boys,” where the classic fairy tale is updated for a millennial hook-up generation.

One minor criticism with the book is that as a collection of mostly flash fiction, a number of the shorter tales aren’t as involving for the reader as the longer pieces are due to their extremely truncated length. Some of these stories in the collection are as short as a sentence or a paragraph. A handful of these stories are still able to do a lot with a little, such as the five sentence “Indestructible,” or the two paragraph “The Changeling,” both of which pack quite a punch in their small frame. But several others of the flash stories are fairly innocuous and inane, such as “Conestoga Wagon” or “Sacramento,” and leave the reader feeling dissatisfied. They sometimes even make the reader wonder why they were included in the collection in the first place other than to pad out the page count to a book length manuscript. However, the good ones have a stickiness to them, whether it’s in the images or in the language, that make them stay with the reader for days afterward.

In addition to the fairy tales, folktales and mythologies, another common theme in Hoopty Time Machines is the American Dream. Or, it might be more accurate to say that a common theme is the desire for an American Dream, rather than the American Dream itself. In the story titled “An American Dream,” DeWan gives a brief overview of the ways in which people have been in pursuit of the American Dream throughout history. Whether it’s heading out West to become a cattle rancher, journeying to California to become an oil baron, or buying a boat and sailing across the sea, the main character is always on the move and searching for meaning. But in the end, he discovers something that he never expected. In the title story, “Hoopty Time Machines,” DeWan once again portrays a yearning for the American Dream, but this time the specter of it is in the past rather than in the future. The young narrator’s father is constantly working on his “time machine,” which is really just a beat up jalopy in need of repairs.

As befitting a writer with an undergraduate degree in philosophy, DeWan often includes his belief system in his stories. Sometimes they come off as being a little too on the nose, while at other times they’re more integrated into the stories, such as the aforementioned “An American Dream,” and the wonderful “Dinner Party.” However, these musings fit more naturally in a book of essays, like DeWan’s previous book Working & Other Essays rather than in a book of short fiction. While there are a number of stories in the collection that miss their mark, all in all, DeWan puts together a compelling mix of fairy tales, folk tales, and modern day fables for a small, little book of stories that is very much worth your time.

Eric Andrew Newman currently lives in Los Angeles with his partner and their dog, but is originally from the Chicago area. He works as a librarian for a nonprofit foundation by day and as a writer of fiction and nonfiction by night. Recently, he has been named as a finalist for the Robert J. DeMott Short Prose Contest and the Howard Frank Mosher Short Fiction Prize. His work has appeared or is forthcoming in Quarter After Eight, Hunger Mountain, and Necessary Fiction. He is at work on his first collection of short stories.