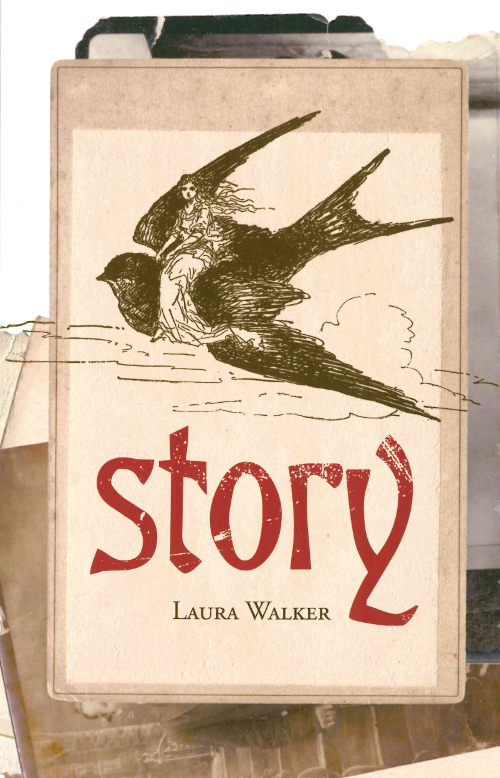 In Laura Walker’s story, a person is a temporary experience and their history can be told many different ways. It’s as though development is a series of changing selves, not just perspectives: “something that won’t dissolve persists, either standing out starkly or never seen.”

Prose poems untitled individually and images drawn from some of the most pungent children’s stories in the English language, story often centers on a young girl, probably seven years old (the ideal age to first experience fairy tales) as she scrapes her knees, flees into the outdoors dispersing into the woods, hides and dodges, and generally revels in “the gift of not being seen.”

Whether this is one girl or many, whether these are the experiences of a single childhood or the stories amalgamate of generations of girls in a single family, we are unsure: “if a story is made in its receiving, in the arc between throwing and catching, someone must shift.” It’s difficult to talk about this collection and avoid contradictions, as story creates its mystery in open possibility of singularity. At the heart of its complexity are a number of transmogrifications. What we take from a story, fable, or any narrative depends on the person we are at the time of reading: as we age we gain and lose the impact of certain aspects, and sometimes it’s unclear if the story is different or if we are:

if a story is a river branching into marshes, then a girl is
bird. snake. arrival.

things turn black against the snow. heartbreaking curve
of a neck, alert. the weight of a story thought to collapse
on itself never having had any weight at all.

Memories of childhood are at the very least kaleidoscopic, but consider one laced with both adventure & trauma and they become phantasmagorical. Add then the layer that those memories are being related variously by a third party and they become mythic. Hans Christian Anderson and The Brothers Grimm play only a partial influence on the fairy tales that the little robber girl swashbuckling through these pages is enamored with. Walker’s text is also drawing on stories passed down within her family about uncles and grandmothers, and it is unclear when the fairytale is separate from familial mythology. So when we receive a passage in darkness such as this we revel in the threat of possibility:

a story as sound, as uncles in the dark. sheets wound
round like cocoons, like dirges. who touched whom, and
under what circumstances.

Whoever’s childhood this is, it is one of adventure. Danger lurks for her the way great complexity accompanies a fairytale, a nuance to the world that does not allow it to be viewed in simplistic ways. Where a brother is transformed into a swan, one life is destroyed while another is created.

In story everything is words, and some of the best moments in this mystifying collection set in America’s southland come as homage to this literalization:

What’s true in Walker’s previous books holds up in story as well: nobody can quite capture the world’s inconspicuous quivers like she can.

context. convergence. a branch’s lettered bend, stark
against the sky; the sky itself a chilled sheet. she
comes to the first word empty-handed. when she
takes on the weight she starts to loose herself,
wandering here in the woods, trails of tin circles not
meant for her. to lead yourself back out of the story is
to fumble with shape in the dark.

Alex Rieser is the author of the chapbook Emancipator (New Fraktur Press, 2011), and has internationally published poetry, fiction, interviews, and criticism. His work has appeared in Ploughshares, The Cossack Review, The Portland Review, Paris Magazine, The Prague Review, and many others. He holds an MFA from the University of San Francisco, where he served as Chief Art & Poetry editor for Switchback. He currently lives in San Diego, California, with his wife and son.