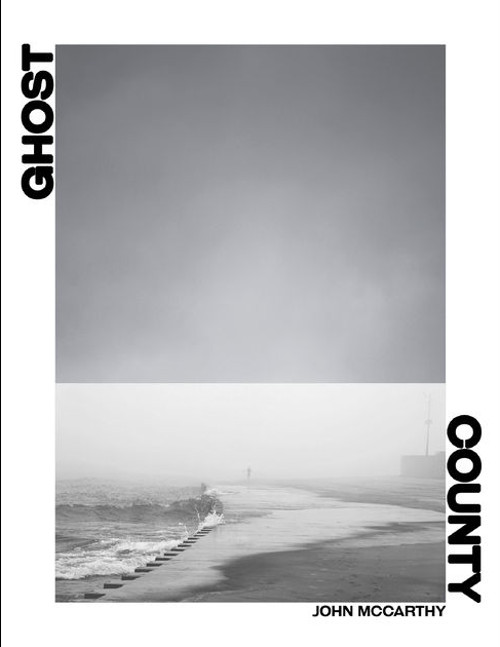 Don’t be deceived by John McCarthy’s debut collection, Ghost County. The book’s slim size and meticulous organization can lull the unguarded reader into thinking that they are in for a quick indulgence, a one-sitting flick through a stereoscopic tour of the American Midwest. The imagery is well-rendered but familiar, and emotion is referenced, but the narration opaque. However, in digging beyond the pickup trucks, the chicken wire, the teenage angst, and the small-town malaise, Ghost County reveals itself to be an exploration of a dream world where fantasy and nightmare mingle, an exploration that becomes more vital on repeated reading.

Ghost County is divided into three sections, titled “Back Roads Out of Loneliness,” “Pickup Truck,” and “The Traces We Are Leaving.” It’s in the first section, “Back Roads Out of Loneliness,” that some patience is required. Thematically, the poems in this section fit together quite nicely, but mentions of corn, mason jars, alcoholic preachers, and the repeated appearance of various manly brands of cars can’t help but project an “I’ve seen this all before” vibe. Of greater concern is the barrier between the poetry and the reader here. Even those poems written in first person keep introspection to a minimum, focusing instead on description and the occasional physical action.

That aforementioned patience, however, is rewarded in spades upon arrival at the second section, “Pickup Truck.” This section contains eighteen poems, all titled “Pickup Truck,” and they work together and separately to cross any distance that the first section imposes between reader and material. Every poem in this second section is in open, raw first and/or second person, and the poems’ strength is magnified by their placement after the scene-setting poems of the first section. In fact, a return visit to the first section after reading this “Pickup Truck” sequence reveals just how well it performs its opening act duties, grounding the reader in place and feeling.

The section begins with the phrase, “Just pretend it is all / four seasons at once.” Meaning is packed into this phrase—in these “Pickup Truck” poems, the Midwest is both everything to those within it and stuck in place, a seasonless time. This section reveals the violence, the beauty, the sadness, and the addiction of being trapped in that static setting.

Wisely, the third section, “The Traces We Are Leaving” doesn’t attempt to match the heft or introspection of “Pickup Truck.” Instead, beginning with one of the collection’s best pieces, “Silence Rising, Dust Rising,” the poems in this third section place the conflict of the second section into the places and feelings from the first section. This gives the poems within “The Traces We Are Leaving” a haunted feeling, a blend of silence and sadness that punches hard. This is particularly satisfying because of how clear the intention is in these poems. They outwardly reference the cold, the dead, the sad, and the lonely, and these descriptions bite following the spark of life that ignited in the preceding “Pickup Truck.”

Though “Pickup Truck” is the obvious standout, the cumulative effect of the three sections is what makes Ghost County truly shine. Too often, crafty organization of collections can seem manipulative or purely aesthetic. The organization here serves a true purpose, so much so that returning for a second read of the entire collection was a real joy.

It must be noted that those looking for humor, subversive or otherwise, won’t find much in Ghost County. The collection does wear its quirks on its sleeve (for instance, a near-obsessive mention of fingernails is impossible to miss) but humor obviously wasn’t a priority here. That is absolutely fine, but because of the popularity of A Prairie Home Companion, Parks and Recreation, writers like Michael Martone, and particularly because of the rise of Midwestern poets like Beth Ann Fennelly and Lisa Janssen, Midwestern art comes with the expectation of humor, or at least subversion.

While the lack of humor is understandable, it is unfortunate that McCarthy doesn’t tackle more of the Midwest’s divisive topics. Given the recent events in Ferguson, Missouri, the racial division of Chicago, Indiana’s Religious Freedom Restoration Act, the economics of Detroit, and the fact that the Midwest is so often portrayed as the protectorate of traditional American values, it would have been powerful to see McCarthy reflect on topics such as race and sexuality. He does narrow in on masculinity, but sex itself mostly absent. Explorations of words like throbbing, bloom, and bulge seem to be leading in that direction, but the author seems hesitant to go there. And while poverty, drug use, and alcoholism make appearances there are few mentions of the relationship between police and private citizens. Given recent Midwestern poetry like that of Joanna Klink the late Akilah Oliver, who both explore similar themes to McCarthy with the inclusion of race and sexuality, this feels like a bit of a missed opportunity.

Still, this cannot obscure the fact that John McCarthy has produced a commendable debut collection, the rare collection that is notably elevated by its clever arrangement. And, while the arrangement itself is marvelous, that would not matter if the poems themselves weren’t gorgeous. The poetry here is subtle, revealing, and perfectly Ghost-ly, despite being completely tactile. McCarthy’s Ghost County is a sad celebration of the Midwest, a place that raises its inhabitants straight from the earth only to freeze them on the vine.

Like Sharon Stone and the zipper, Mike McClelland is originally from Meadville, Pennsylvania. Before becoming a writer, he worked as a grave digger, wedding singer, antique salesman, and marketing strategist. He has lived on five different continents but now resides in Georgia with his husband and a menagerie of rescue dogs. His work has appeared or is forthcoming in several anthologies and in journals such as Permafrost, ink&coda, Cactus Heart, and Poetry Pacific, among others. Keep up with him at magicmikewrites.com.