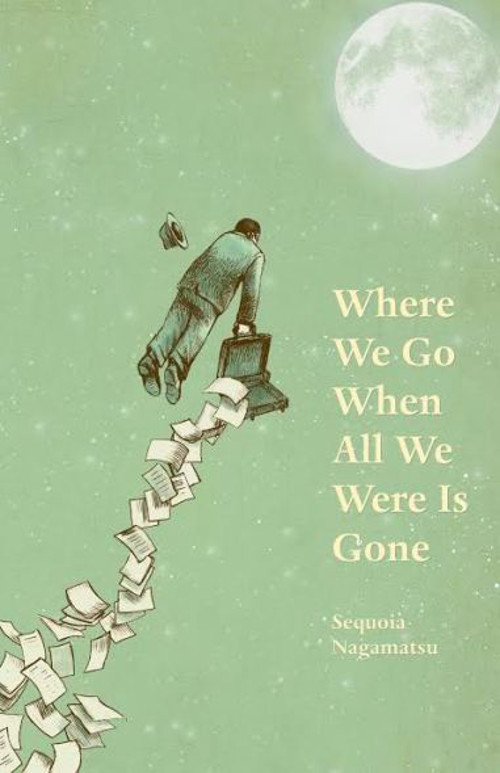 The fantastical has long been a part of American literature. From Washington Irving’s “The Legend of Sleepy Hollow” to the magical realism in Toni Morrison’s Beloved—fantasy is American and its type of fantasy distinctly so. But today’s fantastical literature is different from what has come before. Writing for Electric Literature, author Amber Sparks dubs this distinct genre “domestic fabulism.” Domestic fabulists, she writes, “takes the elements of fabulism—the animals that talk, the weather that wills itself into being, the people who can fly—and pulls them in tight, bringing them home.” This emerging genre—gleefully straddling the line between pulpy entertainment and literary seriousness—already has a strong list of writers to call its own, including Sparks herself, George Saunders, and the recent Pulitzer Prize finalist, Kelly Link.

Sequoia Nagamatsu sits comfortably on this list, too. His debut collection Where We Go When All We Were Is Gone has all the hallmarks of domestic fabulism—magical happenings, an intense examination of domestic life, plots that expose not the terror of monsters but the emotional dangers of living with humans and of being human.

In the opening story, “Return to Monsterland,” a kaiju scientist dies at the hands of one of her beloved monsters. After her death, her husband visits a kaiju island reserve to not only “make chaos somehow make sense,” but to try to see what his wife saw in these creatures. To help him, he brings her field notes, short poetic passages that describes the likes of Godzilla, Minilla, and Mothra. Surprisingly, what he and his wife lacked, he finds in these monsters. Rodan, the “irradiated Pteranodon” has “a history of self-sacrifice to help others” while the scientist and her husband sacrificed nothing for their careers. Angurius, an “Ankylosaurus w/ Styracosaurian cranial features,” is the “oldest and perhaps most consistent ally of Godzilla,” but the longer the husband and wife stay together, the further apart they grow. How easy is it to know a monster, yet how unknowable are one’s own species, “Return to Monsterland” proclaims. It’s a theme that unites much of the collection: how much can we know of anyone, where they have been, and where they are going?

This is most notable in “Rokurokubi,” where a man tries to come to terms with his ability to stretch his neck into infinity but stops from revealing himself to his wife despite the chasm that grows between them. “She’s the only thing I’ve ever really wanted in my life,” he writes, “I was afraid she’d leave. Any courage I amassed to tell [her] the truth had vanished. And now, five years later, I have the same fears because I never told her.” The secrecy pushes their relationship to its limits, and after she exposes her infidelity, he imagines giving his own confession, only to snap back to reality where he’s spying on his wife and “watching [her] figure become fainter and fainter until [he] can’t see her at all.” Like “Return to Monsterland” and many other stories here, “Rokurobuki” doesn’t end neatly resolved. Rather, it ends elliptically: some realization has happen, but we are unsure if that realization will prompt any changes.

The state of being stuck or trapped are essential to these stories. The characters, left with a revelation about their world, realize, tragically, there is no escape. By having supernatural elements built into the core of the narratives, domestic fabulists like Nagamatsu present dream worlds as reality. And when dream is reality, to where does one escape?

Grimly, the answer might be nowhere, even in death. In “The Inn of the Dead’s Orientation for Being a Japanese Ghost,” for instance, the spirits of the dead are checked into a motel where they train to return to earth as ghosts. In the title story, hundreds dance in Shibuya as the country falls into famine; when they stop dancing, their memories are erased and their bodies rebooted and retrained by an autocratic government.

The collection’s strongest story—a technically astonishing piece— “The Passage of Time in the Abyss,” takes this idea of entrapment to a claustrophobic crescendo. While out at sea, brothers Tamo and Kogi retell the story of their father’s mysterious disappearance. As a storm sets in, time and logic become muddled as scenes are replayed and rewritten, mimicking at times, a funhouse mirror, where the realities of the present and past are lost and distorted. Likewise, in the flash fiction piece “The Snow Baby,” a creature made of snow comes to life and dies with the seasons continually into perpetuity. Time in Where We Go When All We Were Is Gone functions not linearly, but in circles, producing the ultimate nightmare: not one of monsters and demons but one of uncertainty and dislocation.

These stories are undoubtedly dark, less Disney movie, more Grimm Brothers fairy tale. The difference, though, is the Japanese tradition Nagamatsu writes from. One can easily mistake these stories for a works in translation, as steeped in Japanese culture as they are. Indeed, there are echoes of Haruki Murakami’s weirdness, Ryūnosuke Akutagawa’s ambiguous morality. And it is precisely this that makes Nagamatsu an important addition to the expanding genre of domestic fabulism, a genre that, in the US context anyway, is not as diverse as the country’s population. Moreover, Nagamatsu takes readers away from the American landscape and asks us to look beyond our backyards.

Where We Go When All We Were Is Gone, however, is not a pessimistic book. Nagamatsu has a way with humor that is both playful and gentle as seen in many of the flash prose poem pieces that act as interludes throughout the book, balancing what could have easily been a cynical collection.

Interestingly, Nagamatsu ends the book with a realistic story (“Kenta’s Posthumous Chrysanthemum”) where a family comes to terms with the death of a son during a firework accident. To remember his death, the father aims to accomplish what his son died attempting: to make the largest Chrysanthemum firework in history. Unlike the other stories, the death here is real, and so is the sense of closure. Ending the collection with this story, Nagamatsu returns readers to our own world, where hope is alive, lives are changeable, and perhaps, the human heart is not too unknowable.

Like the best short story collections, Where We Go When All We Were Is Gone takes us on a guided tour of the human heart. At the beginning we are thrust into strange territory, and by the end we are back on familiar grounds, not necessarily wiser but definitely changed. Each story has its place in a larger discussion, and each surprises and awes. With this book, Sequoia Nagamatsu has written a stunning debut—a sure classic of domestic fabulism—that adds much to the genre and beyond.

Eric Nguyen has a MFA in creative writing from McNeese State University and BA in sociology from the University of Maryland. He has been awarded writing fellowships from the Lambda Literary Foundation and Voices of Our Nation Arts (VONA).