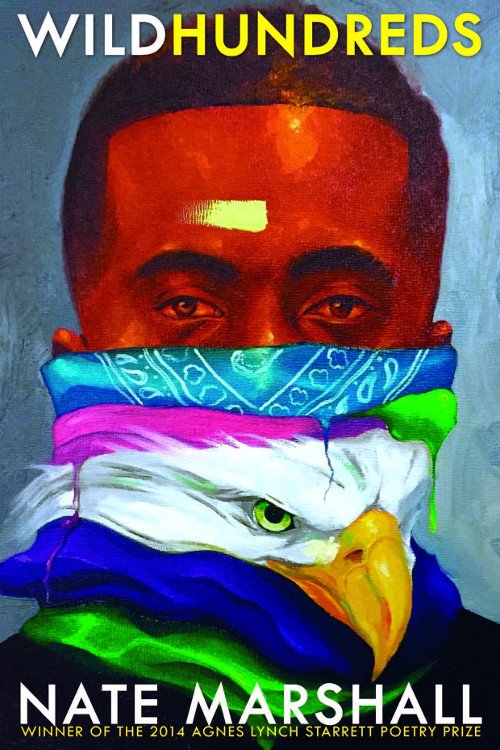 Nate Marshall’s Wild Hundreds is a story about amnesia and national shame. In these poems, Marshall presents us with a host of difficult subject matter. He shows us high school dropouts and troubled towns with troubled teens. He shows us the deeply embedded systems of control and oppression in our places of leisure and work. In brilliant flashes, Marshall shows us how the lightest shades of color can transform into age-old scars. Simultaneously, he gives life to those who are invisible in our age of nonstop television and lightning-quick advertisements. He speaks of the few and the many, the rich and the poor, the wild and the chained. By telling this story, our story, the dizzying array of poems he creates help explain our self-induced amnesia. They explain our shame. Despite all our shame and all our hypocrisy, Marshall reminds us that our story is also one of incredible love.

As many will note, Marshall grew up on the South Side of Chicago and later was featured in the 2010 documentary Louder Than a Bomb. The wonderful musicality in Marshall’s verse owes its success, in part, to his serious engagement with the world of hip-hop. He even has his own rap group, Daily Lyrical Product. Additionally, Marshall is the founder of the Lost Count Scholarship Fund, which focuses on youth violence prevention in Chicago. Marshall’s poetry has won numerous accolades, including the Agnes Lynch Starrett Poetry Prize. He received his MFA from the University of Michigan. Wild Hundreds is his poetic debut.

In this debut, the poems move desperately, feverishly attempting to make sense of all the madness in this world. To accomplish this, Marshall does not shy away from breaking normal syntax. He lets the beat of the line carry his words: “dropout rates is high dropouts / is high like them girls shorts come the month of May for them / police officers is hall monitors them businesses over there fail like / the schools most all fail except liquor stores.” Schools fail. Police officers are hall monitors. Only liquor stores remain.

Marshall powerfully captures the wild suffering of everyday life. These are not grand narratives. These poems are borne out of hardship and loss. In his poem “Harold’s Chicken Shack #1,” Marshall challenges our claims of empathy when he says, “when the whitefolk wouldn’t sling / us burgers you gave no fuck.” In the final stanza, Marshall arrives at the height of his lyrical powers, “every cut of crow you / throw in the grease is dark / meat. the whole shack: / shaking, drenched in mild / sauce, sweet spirit, baptized.” Here, Marshall baptizes his readers in chicken grease. He sends us hurtling back to reality, the reality of poverty, and toward the reality of our racial divide.

The poem “off white” offers up a quiet, yet painful, little memory, but in it we find the immensity of Marshall’s voice. Marshall writes, “the beginning of each game / was an awkward pledge / to fairness maybe, something of that / sort but i can’t recall.” Marshall forces us to wake up and shake off our self-induced amnesia when he writes, “our team was a different shade from the catholic school boys we played.” At one point, a boy on the other team smashes the speaker “over the head.” In this instant, the catholic boy’s “heavy forearm” transforms into “a cat-o’-nine tails.” This somewhat surreal transformation infuses the poem with historical depth, however horrifying. The boy’s petty cruelty during the game is ignored by the referee.

This is what’s so amazing about Marshall’s first collection. He skillfully shows us how to be present in the moment of time each poem creates. Ultimately, in these moments, we have to absorb both Marshall’s hate and praise in order to heal. We have to join him in praising “the impossible blue” of a January morning in the Midwest. We have to feel it when he punches his fist into his hand so hard “it aches.” We have to grieve with him in low moments when he “can feel the tears just underneath another ecstasy.” Like all good poetry, Marshall leaves us with hard-won lessons like this “the only thing we possess in / is what we earn by sweat.” Everything has to be earned. Words have to be earned. Love, wisdom, redemption, all this must be earned. Marshall teaches us how to get there.

Caleb Nelson is a poet living in the upper peninsula of Michigan. He is a Master of Fine Arts Poetry candidate at Northern Michigan University, and Associate Poetry Editor of Passages North. His work has appeared in or is forthcoming in Crab Fat Literary Magazine, Stoneboat, Prick of the Spindle, Red Savina Review, Storm Cellar, Josephine Quarterly, Gravel, and Cardinal Sins.