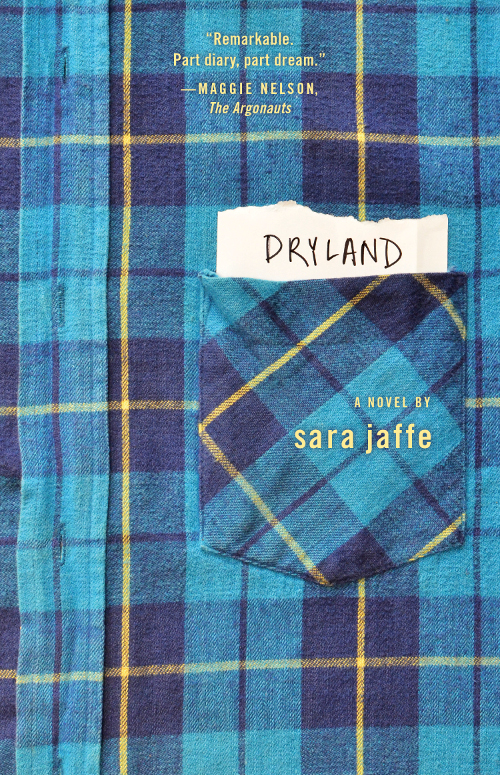 Think back to your early teenage years. What do you remember? Perhaps specific moments come flooding back. Maybe it’s more of a general feeling tinged in dusky sepia. It is a time when we are figuring out how to define ourselves, when we are learning what we want to say no to and when we want to say yes. Dryland by Sara Jaffe dives into the deep end of these moments. It takes that dusky sepia filter and puts it into words. This novel is, above all else, a meditation on identity and how we form it.

In earnest, tender, and exacting prose, Jaffe gives us the story of Julie Winter on the cusp of adulthood. Julie is growing up in Portland, Oregon, in the early 1990s. There is so much unfolding around her: grunge, liberalism, Riot Grrrl, AIDS. But Julie is at that sweet age where she has not yet succumbed to the culture that surrounds her. She is on the edge of it. It shapes her world, but not her, not yet.

The book follows Julie as she begins to understand her body in the larger context of society. Her world is becoming more than her family and her best friend. She is expanding. Through the pages of Dryland, Julie is confronted with different possibilities for her future self. She lives in a sleepy, liberal town with a family who is kind, but distant. She exists in the shadow of her older brother, an Olympic-trained athlete who never succeeded in the world of competitive swimming, though he is a legend in the town. He left America for hyperliberal Berlin. There is a cloud of mystery around his departure. As Julie’s own sexuality unfolds, new light is shed on her brother’s reason for leaving Portland.

“If Erika and I stopped being friends,” says Julie of their friendship. “It might be sad for a moment and then okay. It would be what got called growing apart, which sounded calming, a floating, a benign distegration.”

Enter Alexis. Alexis is an older, more beautiful, more popular girl in Julie’s high school. She is captain of everything—swimming, soccer, yearbook. Her hair falls perfectly to her shoulders. Her sweatshirt fits her in a way that hides her body but doesn’t. Julie is drawn to Alexis in a way that Julie can’t understand.

Julie follows Alexis’s bidding and joins the swim team. Swimming was a sport allotted to her brother, which is another reason she’s drawn to it. Alexis pulls Julie into a world that Julie didn’t even know was there to discover. It is a world where beautiful, popular girls kiss you on the mouth, a world where they call you at night to see what you’re doing, a world where they drive you home in their car, invite you upstairs and take off your clothes and then don’t talk to you for a week.

“My mind went to Alexis,” thinks Julie after they’ve kissed. “Not to her, but to the feeling of her, the change that had arced the air when she leaned against me and said, Come here.”

But there is a striking difference between this “coming out” novel and others before it. In Dryland, the protagonist never identifies herself as gay. Julie’s story doesn’t begin with her own revelation. It’s inverted. Alexis sees something queer in Julie, maybe even before Julie sees it in herself.

When Alexis suggests Julie might make a good photographer, it sends her down a rabbit hole of wonder. Could it be true? She muses:

Taking photos might become a thing I did—not because I cared about moving up in Yearbook, but because I was a good photographer. The shelves in our house had a few of my brother’s trophies and some old family photos, but the walls were mostly blank space…I looked at the blank, beige walls and saw framed images heaving into focus.

Julie never pursues photography in a serious way. The daydream of taking pictures doesn’t gain traction. It’s only a thought. The identities Julie will grow into are just as unknown to Julie as they are to the readers.

Dryland’s author, Sara Jaffe, is well-known in musical circles as the ex-guitarist for the Bay Area feminist rock band, Erase Errata. Jaffe knows the world of queer life on the West Coast that awaits Julie should she choose to embrace it. When the book ends, it’s not clear which way Julie will turn, but there’s a residual feeling that this is the beginning of a new life for Julie. She is being led into a world where gay culture is alive in a town and region where a queer life is a burgeoning scene.

Jaffe’s punk rock pedigree forms the sound, texture, and tone of the book. The sentences seem strummed out by a musician’s ear. Lines like, “The floor of the pool was toothpaste blue and my shadow was that cool, fast color,” could pass for lyrics in another context.

Dryland is a rare kind of coming-of-age story, and it’s told in dreamlike prose. It presents the amber-hued confusion of first attractions without becoming too nostalgic about youth. Jaffe does justice to high school, to the repetitiveness of the days that seem to bleed into one another with few markers of separation, albeit firsts—first swim race, first time you think a boy is hot then realize it’s a girl, first time you kiss another person and can’t stop thinking about it for weeks. This is a novel sure to delight lovers of Alison Bechdel and Jeanette Winterson, and a wonderful new addition to the queer coming of age canon.

Genevieve Hudson earned her MFA from Portland State University. Her work has been published by Tin House (online), Bitch Media, The Collagist, The Believer Logger, Monkeybicycle, and others. She moved to the Netherlands for a Fulbright Fellowship in creative writing and currently lives in Amsterdam.